Last time i bitched about how anchoring can be a pain in the ass. Well, turns out it (sometimes) can really suck!

After having changed my Fortress for the (spare) anchor (a Brittany of 14kg) it did hold on the second attempt. But the next morning i still woke up when gusty wind came knocking and i immediately checked my anchoring position. While it seemed that the first gusts of 20 knots did not affect my position, this changed when the second wave of wind came… i was adrift. Again.

This brought me into a stupid situation. I did have a video conference scheduled for 9 in the morning, which would last for roughly 3 hours. And i knew that the wind would increase during the day and peak at night and the next days with gusts reaching up to 38 knots. So, staying with a drifting anchor was no option. 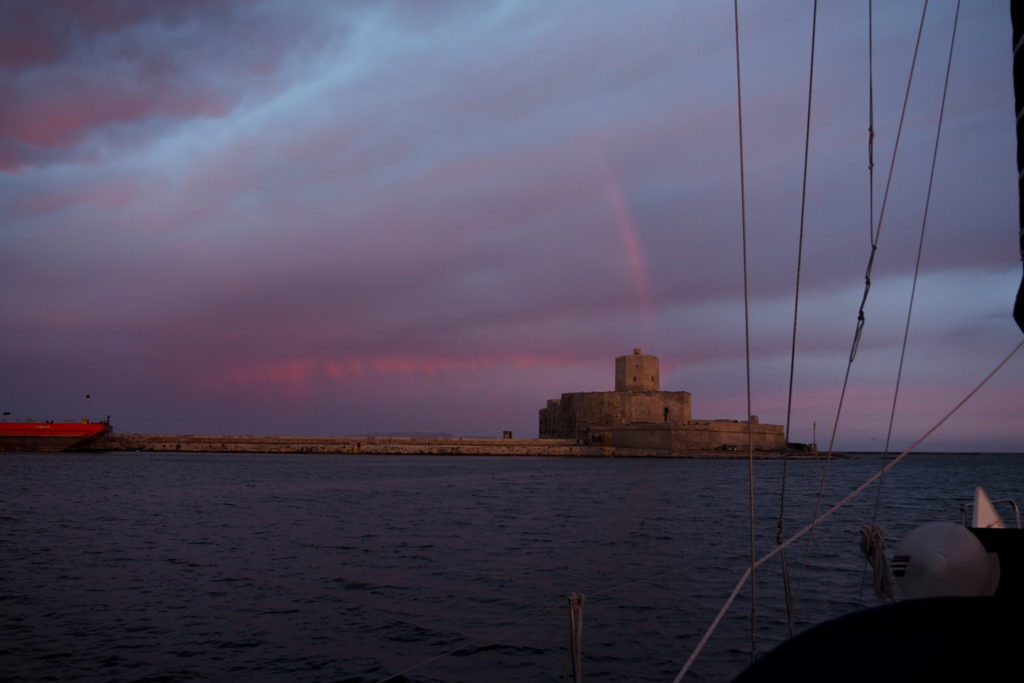 Rainbow at sunrise when having to get up because of a dragging anchor… well, a bit of a make-up 😉

Hence, i had to get the anchor up and wait until the marina opened (at 9) to get inside and tie up properly – for the video conference and the 1-2 days of following strong wind. As i got the anchor up, there was some mud on it, but also -again- some weed. As the other boats anchoring around me did not have any problem at all (they even told me that it’s a really good holding ground) i developed following theory:

There is a good holding ground (mud) at the bottom of the harbor. But is also seems that there is weed all over the bottom floor (after every anchoring attempt i brought up some of it). The Fortress did not get a hold and the Brittany (with its 14kg) only very poorly. My theory is, that both were too light (Fortress) or too light and poorly designed (Brittany) to bite trough the weed and into the mud below it. The other boats were (much) larger and thus for sure had heavier anchors, which probably went easier through the weed and into the mud.

Anyhow. When in the marina i did remove the Brittany anchor from the chain and put the Fortress back on – it’s just soo much lighter and thus easier to handle. Plus: i did not have any problems holding with it until this unfortunate harbor here. And once when i accidentally dropped it into a bed of seagrass – but that is no surprise 😉

And the decision proved to be the right one. Today i sailed up north to Capo San Vito and dropped the (Fortress) anchor there on sand. And it worked as used it used to: first attempt, perfect bite. Slowly into reverse and up to 1800 RPM – no movement whatsoever. I dove down and found a perfectly set anchor, buried in the sand so you could not even see it any more. Perfect. 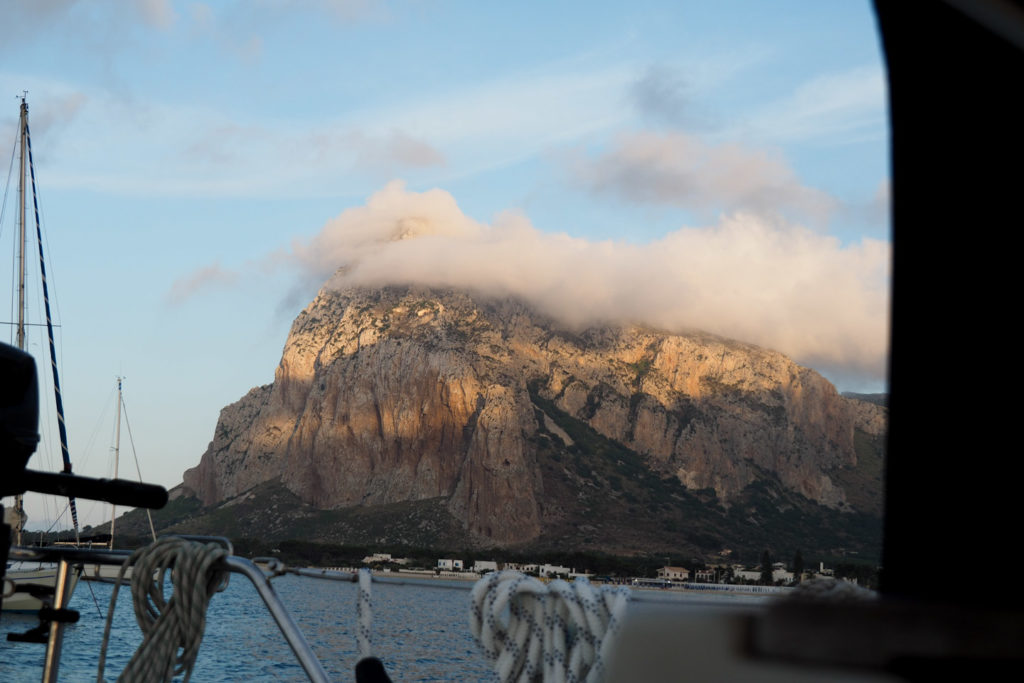 Anchoring at the feet of Capo San Vito, a beautiful bay!

But then again, you read the title: anchoring sucks. I was in a bay that was open only to the north-east. And we have had a westerly wind for the last few days. So, the waves were westerly as well. But waves have a nasty habit of following physical rules and being able to bend around corners. So i had wind from the west, but waves from the north(east). Really small ones. But when your boat (which was heading west-east) is being hit by waves (coming from north) from the side (check) then it’s enough that they are 10cm high to really rock your boat. Nasty. 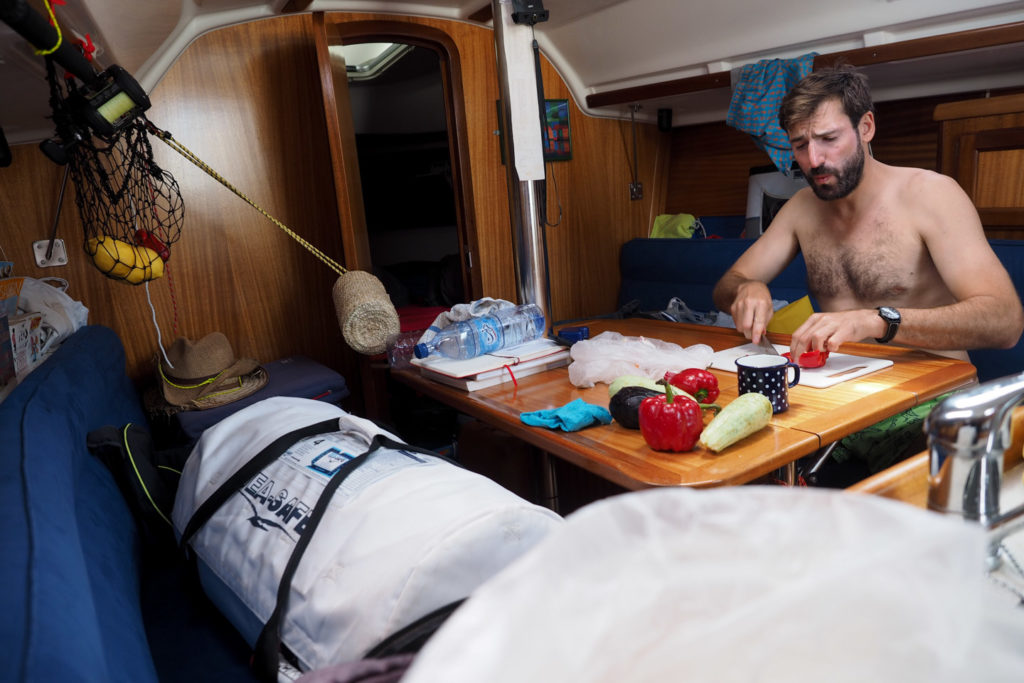 Some cooking makes the time fly by…

Well, i did know that i am safe at anchor so i spent the time cooking, having a beer or two, sleeping and fishing with my newly bought harpoon… 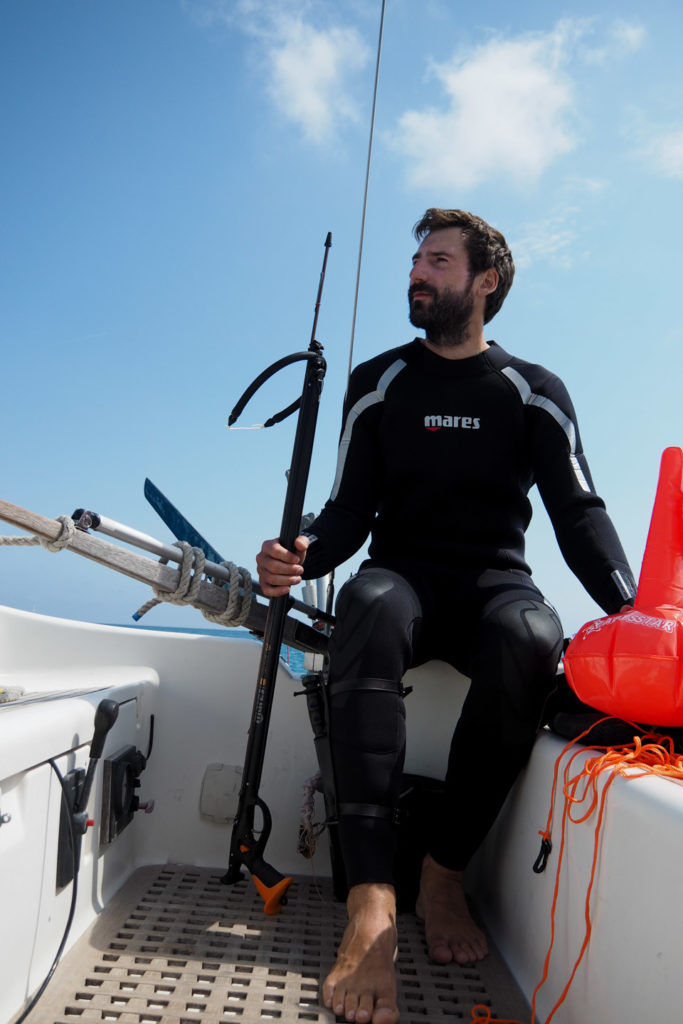 Ready to try out my new (and first) harpoon!

Note: i am NOT sponsored or affiliated by Fortress, but i can highly recommend their anchor AND their support. I once contacted them and received extensive information and greatest customer care. Also, which really positively surprised me: they found my last blog post and commented on it. This is really a world-class company when it comes to quality of product and customer care. So: if you want to buy a new anchor, seriously consider a Fortress! Mine was already on the boat when i got it. But if i had to buy a new anchor, i would again buy one of these. Just 1-2 sizes bigger so that also more than 30kn of wind would be no problem.

The pain of anchoring