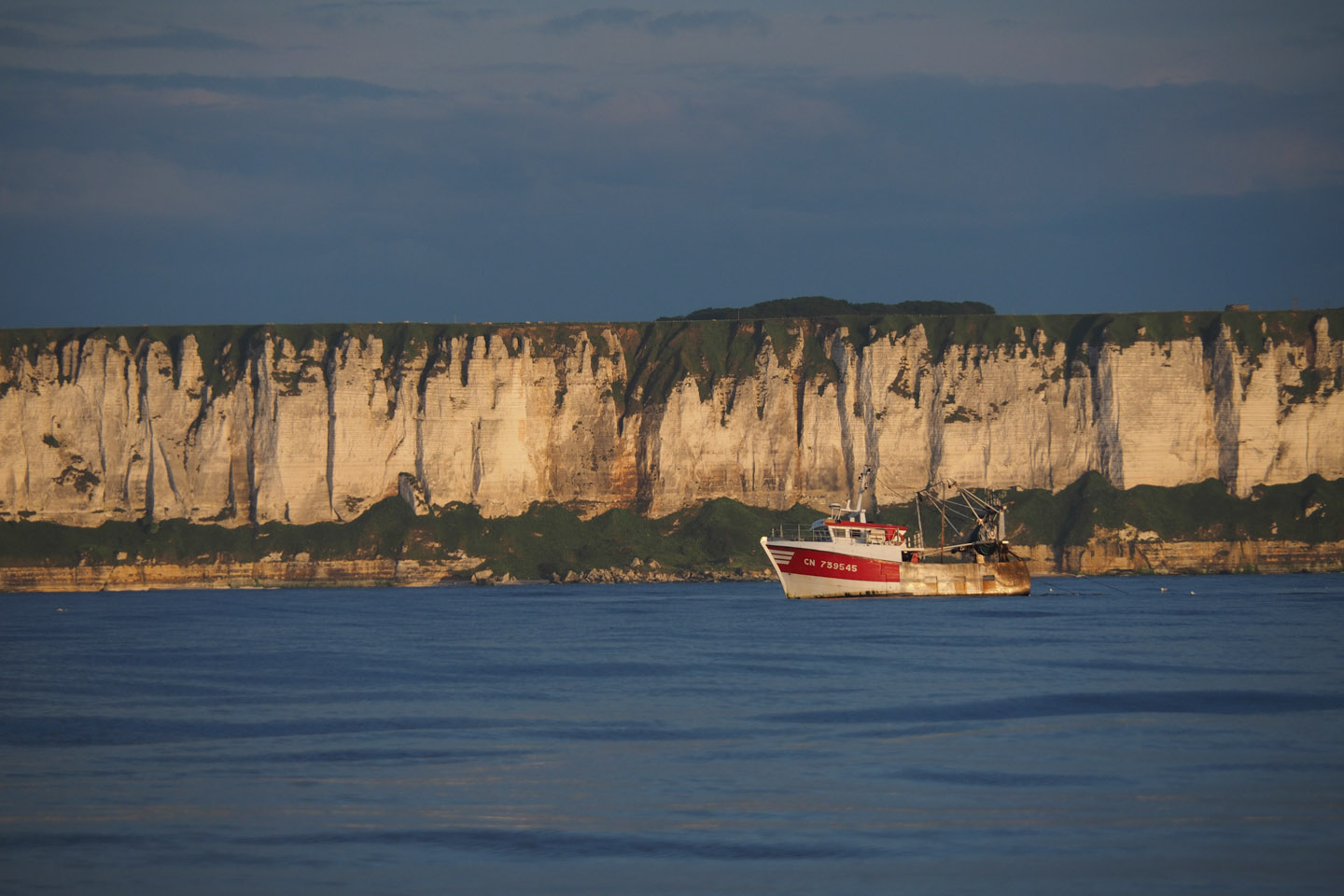 The beaches of Normandy

Listening to a song that starts with a quote from Rocky (6?). I like this quote. It lifted my spirits after an exhausting Wednesday when i sailed to Fécamp, where i am at right now.

Actually i departed westwards for Fécamp on Monday already. But i did not get far. To be precise, i did not get further than a cable out of the harbour. That’s when i identified the incoming boat as the SY Freedom which departed roughly an hour before me. Hermann shouted over to me that they had tried tacking towards Fécamp but basically just went north and south on the same track with almost no progress towards the west. With the wind being unpleasant and the sea state moderate i decided that i don’t need try it either. Not me, being single-handed, when they, being a party of two, returned. So instead i set out for the ship chandlery where i bought a new ladder which should be compatible with the wind pilot.
I also biked up to the chappel ruling over the cliffs east of the harbor entrance. So i found out that it is a chappel dedicated to the seafarers. With a lot of commemorative plaque’s for those who never came back. A grim reminder of the sea’s indifferent lethalness. 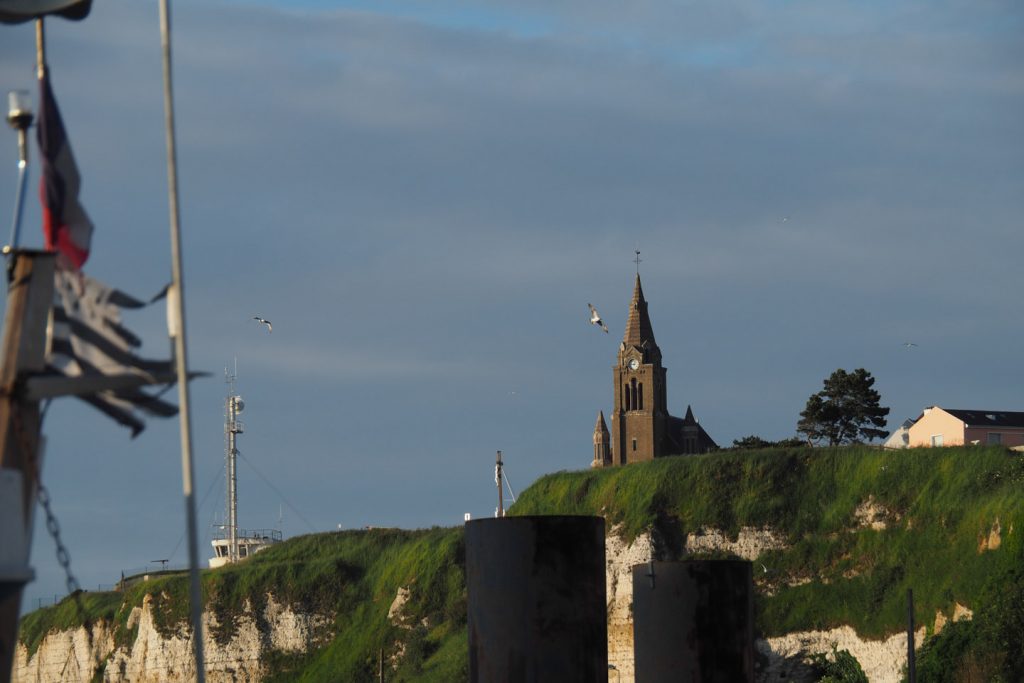 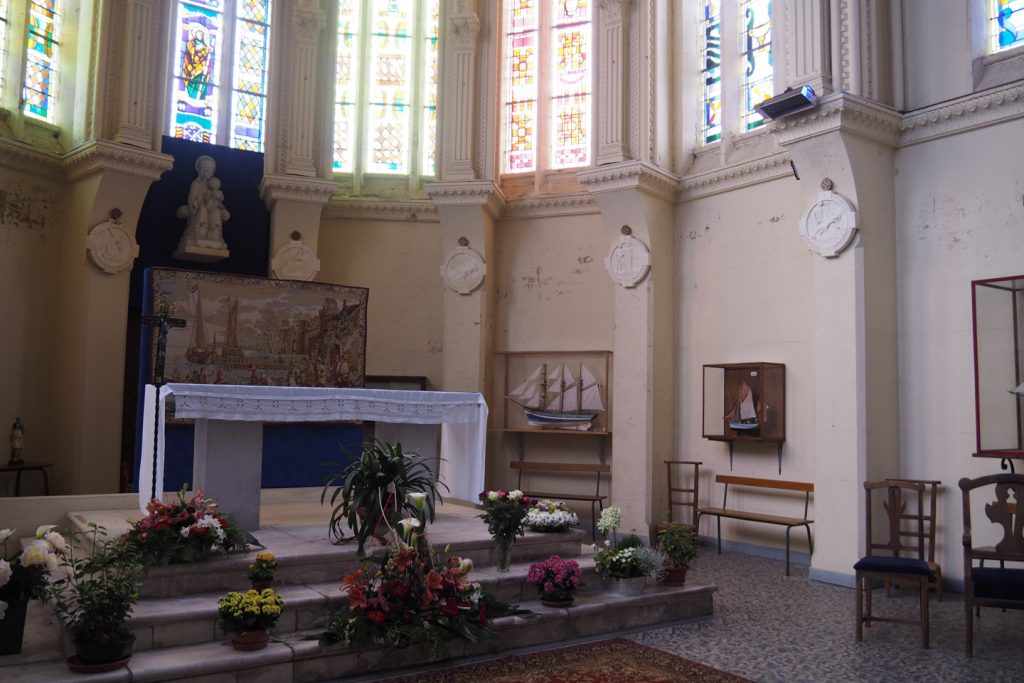 Inside the seafarer’s chapel 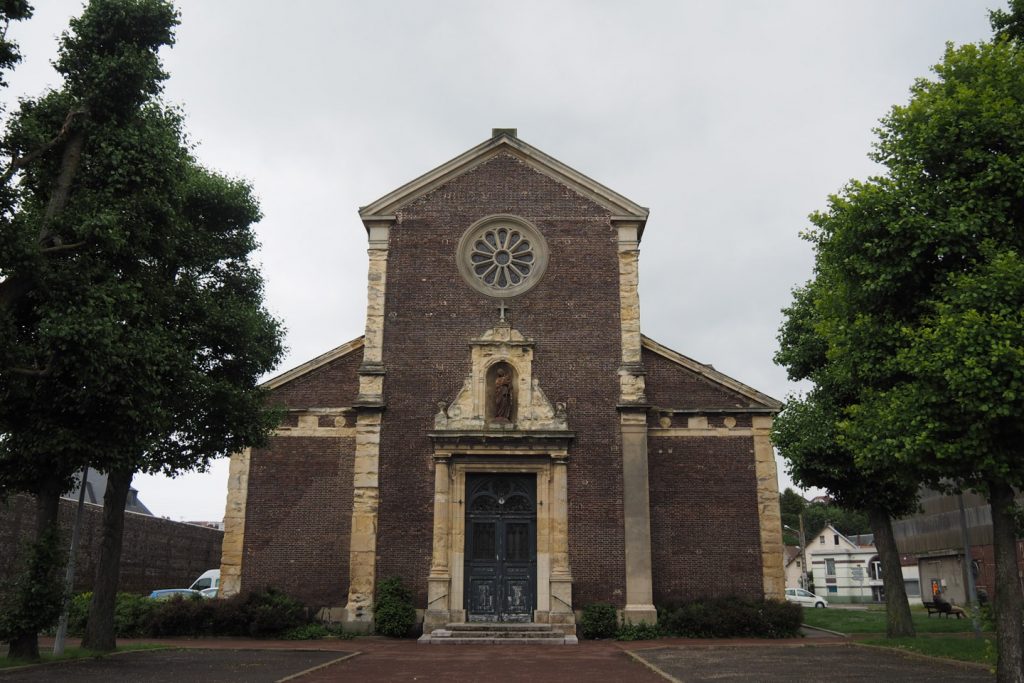 Another (closed?) church in Dieppe 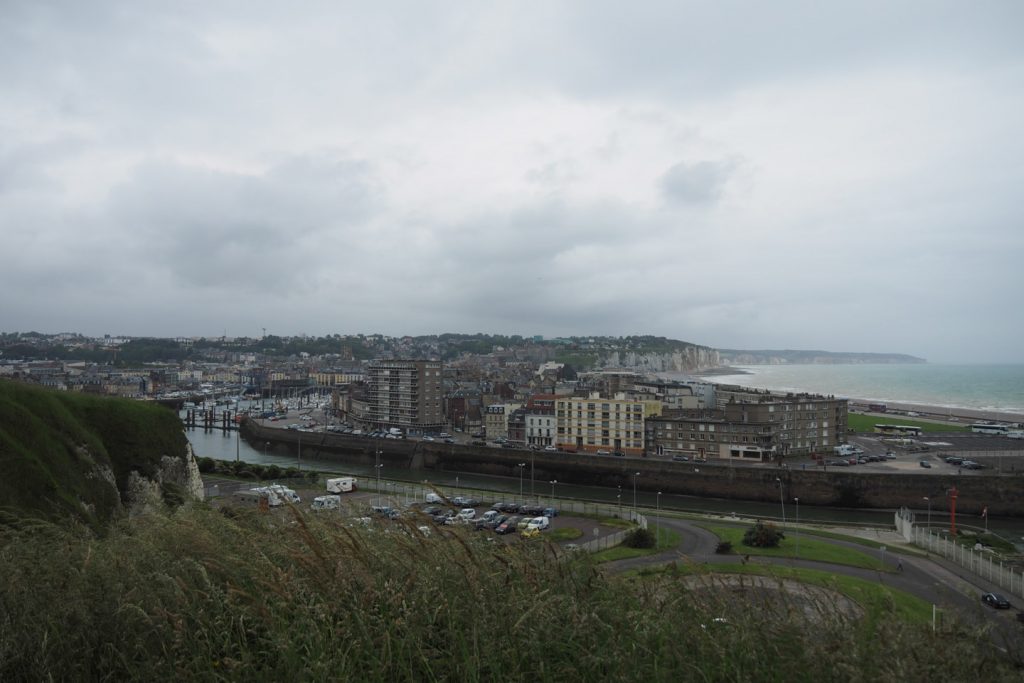 View over Dieppe from the chapel 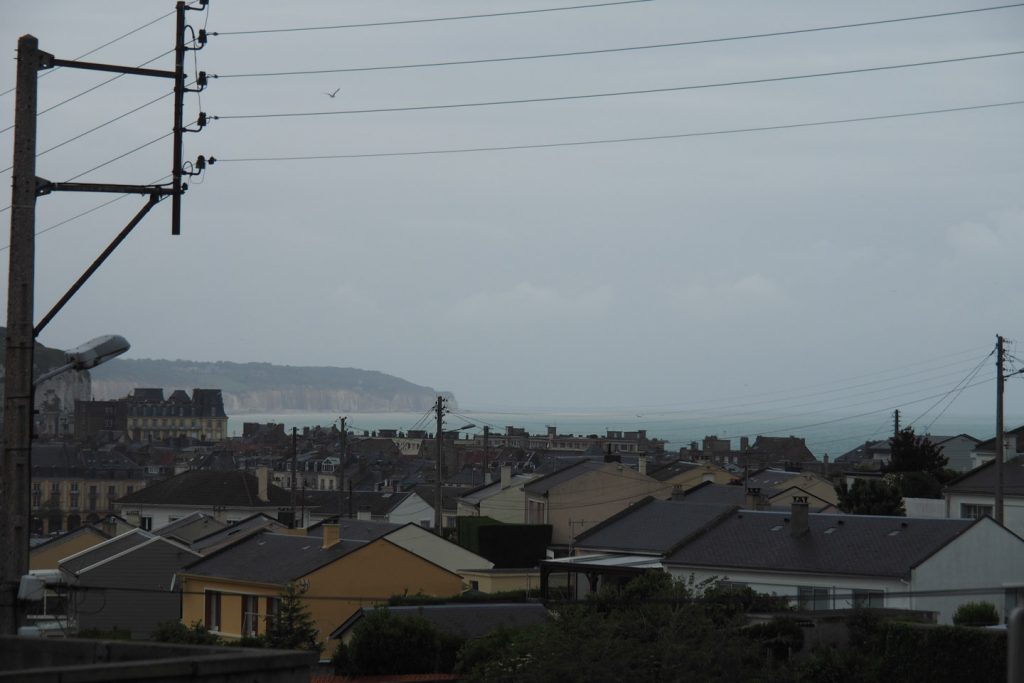 And a view towards the sea…

With wind still steadily blowing from the west Tuesday was boat-work-day. I mounted the ladder to the boat, which was a real pain in the ass job. You have to crawl into a tiny compartment which the hatch to it being too small for both sholders at the same time. And then you try tightening bolts with extended and raised arms. This way i verified the scientific finding that swearing reliefs pain. And really felt like more swearing after realizing that the wind pilot and the ladder are not compatible after all 🙁 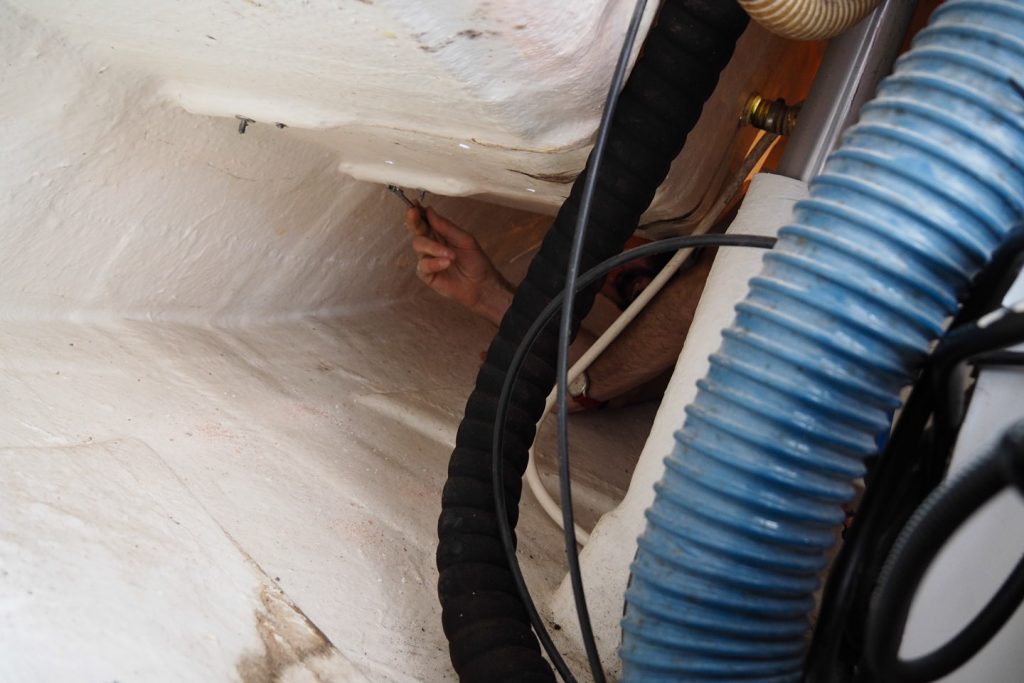 Swearing to tighten bolts in the hull of mala moja

This all took me (again) longer than expected and so i did not get to buy a fishing rod before the Euro’s game Austria – Hungary. Which Austria lost. Well, at least we do have a long going experience with loosing…

Wednesday there was a chance that the wind might be veering towards north and so the SY Freedom and i decided to give it a shot towards the west. My first downer came when i wanted to bike to the harbor office to pay my dues: it seemed that my bike was not pleased with my slow progress of travel and subsequently satisfied it’s wanderlust by wandering off… not fun for me.

Out of the harbor the wind was a (very) solid 5Bft with a tendency to 6. With the tidal stream setting to the west and the wind coming from there it made for a very unpleasant sea (wind against tide). The wind forced me to tack. There is two options to do so. Either a tack every once in a while (half hour or hour) and zigzaging in front of the coast, or going out “the whole way” making one tack and coming back the whole way. Me being lazy, the way not getting longer (adding all the zigzags equals the two long pieces) but loosing speed (yeah, not substantial if not racing) at every tack and with hope that the wind might be a bit more favourable in direction out in the open water i chose to singe-tack. 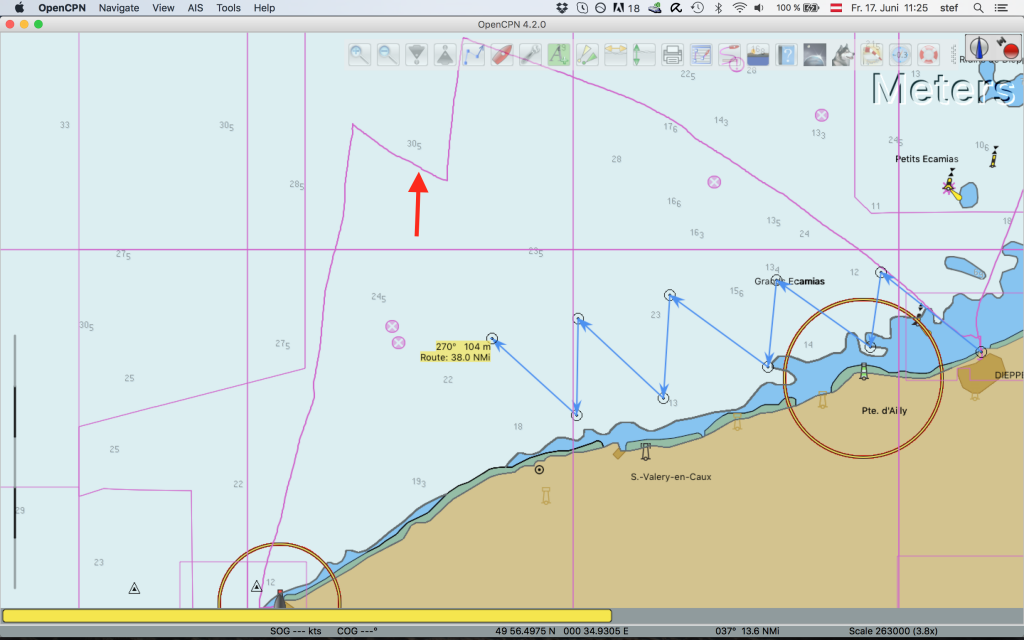 Dieppe – Fécamp, my M-shaped track (marked with red arrow – i tacked too early so i went north-west again) vs. possible zigzag along the coast

Let’s make things short. Either it was the new water i put in the tank the day before (did not ask if potable) or it was the steap sea or both. But i started feeling all but good. At two points i was just a notch from throwing up. It really shattered my morals. The sea got soo much calmer as the tidal stream changed direction, but i still stayed in a sick-state. And despite the sun coming out and the sea calm i was still shaken enough that a coastguard helicopter approaching me at some 50 meters touched me deep enough to bring me close to tears. 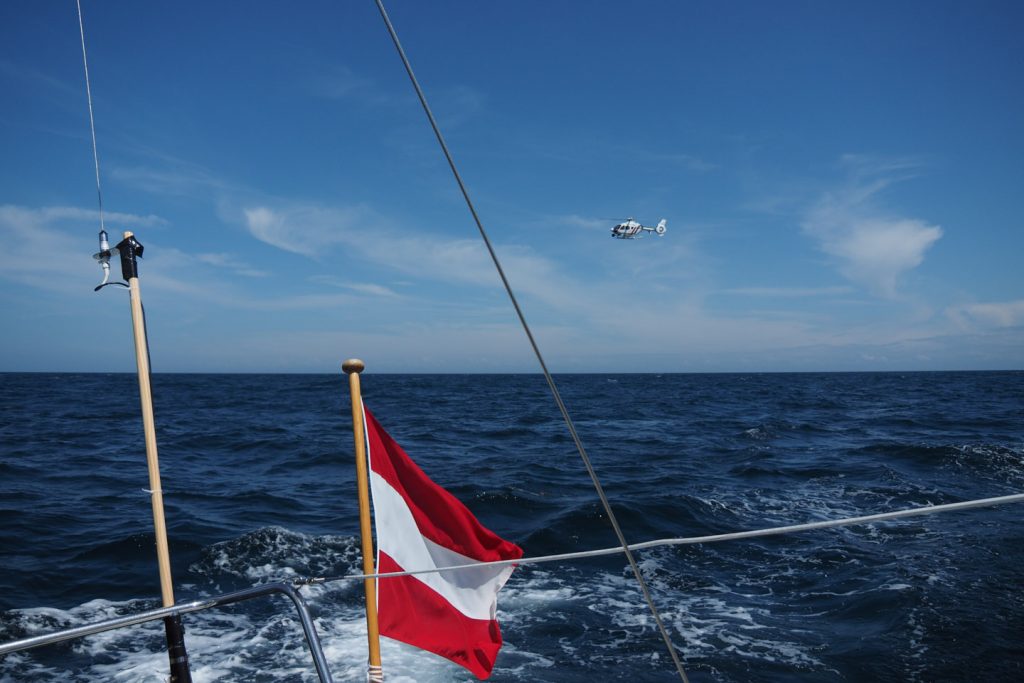 An hour later or so my decision to do the one-tack-route turned out wrong. The wind died off completely. So i had to turn on the engine and motor to Fécamp – with the tidal stream now against me. Would i have stuck to a coastal zig-zag i would have had probably some 4 miles less to go than this way. Does not sound much, but with a strong tide that does make for an additional hour or more (5-6 knots under motor minus 2-3kn stream makes 2-3kn over ground and thus 1-2 hours for 4miles).

But there’s a up to every down. I motored with a steering course almost 40° appart from my course over ground towards the coastal limestone cliffs lit up by a setting sun in extremely calm waters continuing reading my book and experienced my first single-handed under-way sunset at sea. 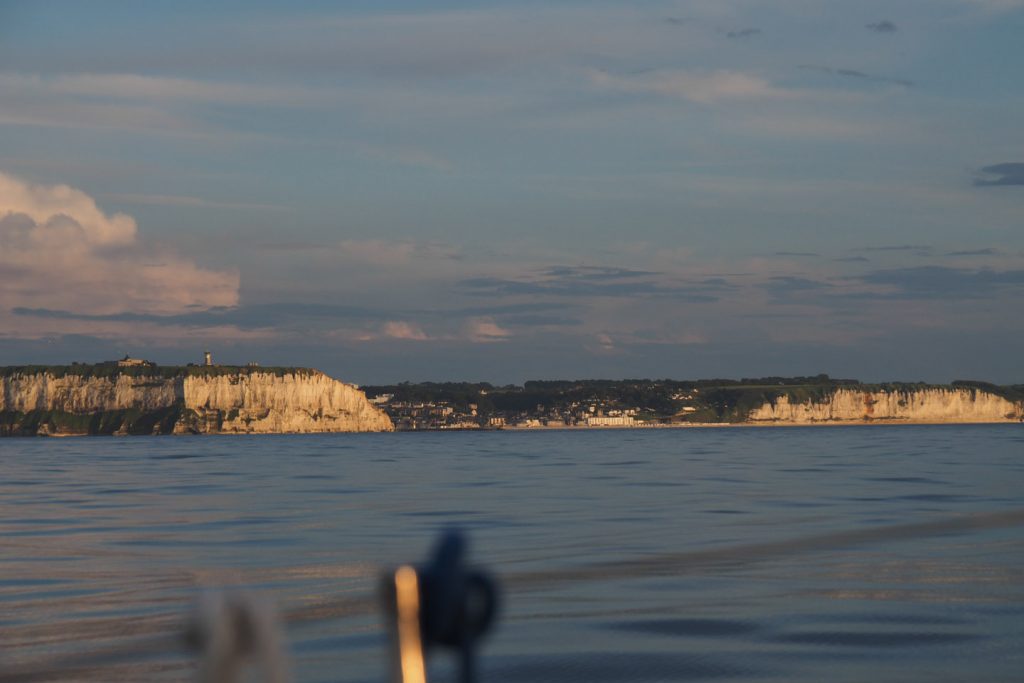 Normandy’s cliffs in the evening sun

Still, entering the harbor i was exhausted and happy to go to sleep soon. Set out for a route that under engine would be 30nmi i arrived in Fécamp after what turned out to be my longest leg so far (56.5nmi). I tied up the boat, cleared the sailing setup to make room for the living setup, turned on the fridge, water pump and cabin lights and was greated with a fissing noise. I located it under the starboard bench, which, when opened, greeted me with a stream of water shooting at the ceiling of the boat. The hot-water pipe coming from the boiler was burst. 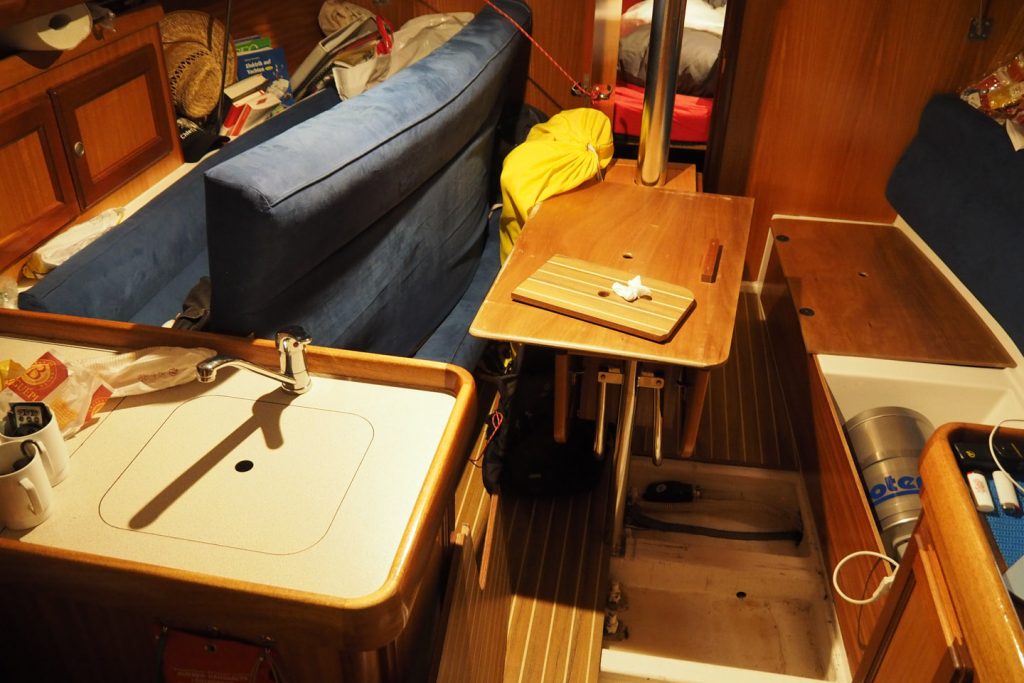 I turned off the water pump, removed pressure from the system (opening the water tap) and checked the bilge, where there was not really a lot of water. The bit there was might have come also from other places. I pumped off what the pump could still suck and tried to repair the pipe with self-vulcanizing tape. Did not work. So i just brushed teeth and went to bed. 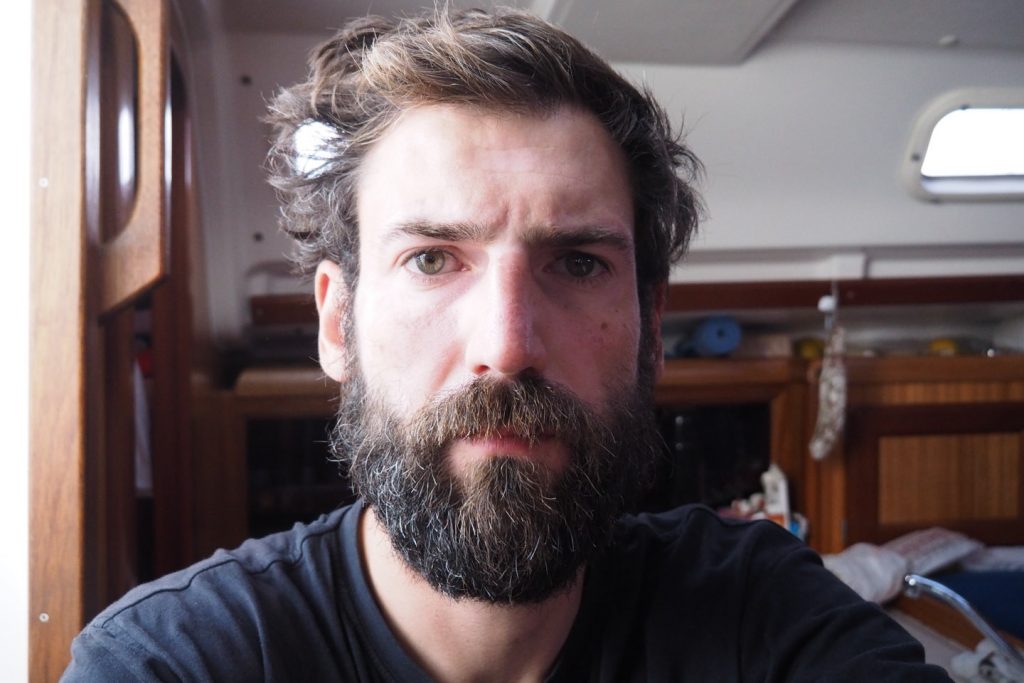 Yesteday was a new day. After my office-working-day (participating in a video-conference for the VALiD research project) i explored Fécamp and went to the ship chandlery. As they did not have the pipe i need i bought a bit of a (thicker) hose and temporarily fixed the rupture with a metal tightening strap. I also bought a fishing rod, which i hope will get me my lunch or dinner today, and then went to watch the Germans play 0-0 against Poland. 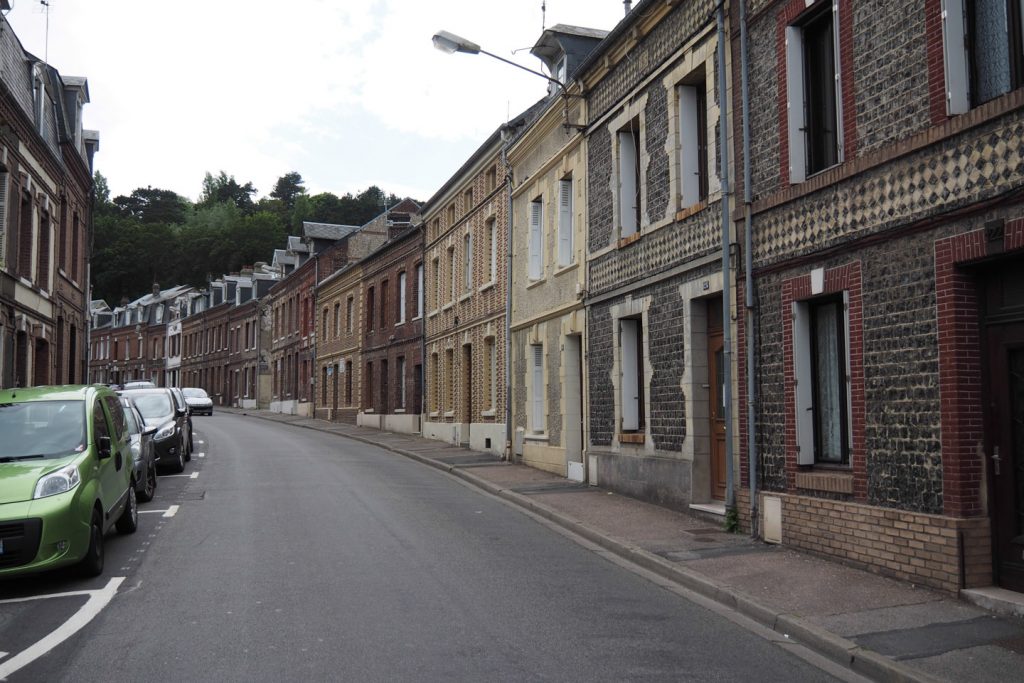 One of many Fécamp’s narrow streets (ruelle) with stone buildings 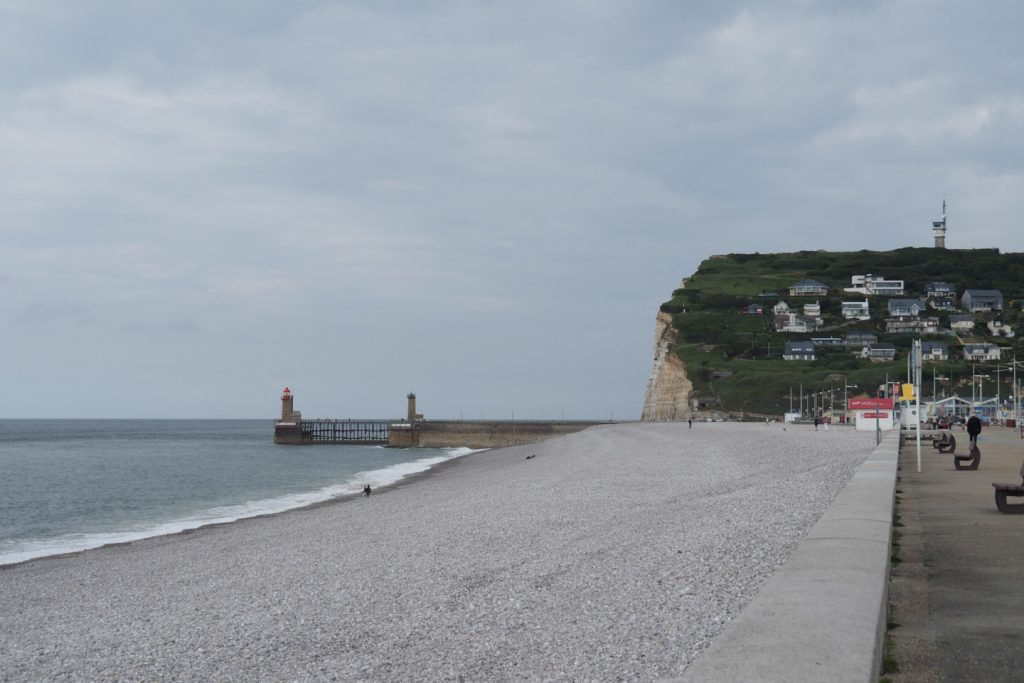 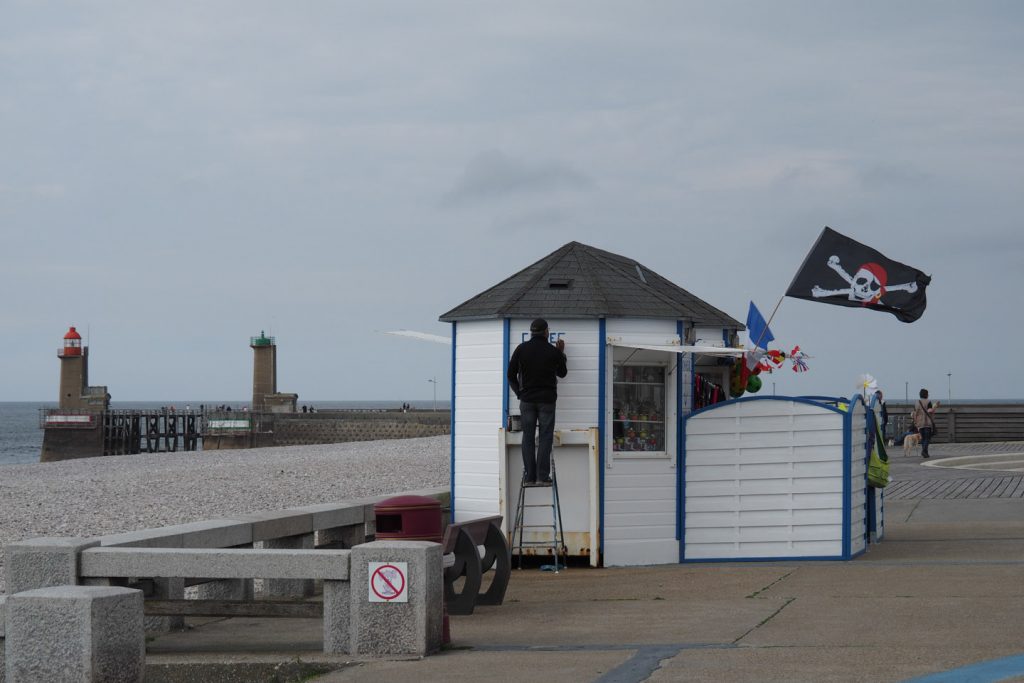 Today is Friday, gray and i’ll stay in Fécamp. On Tuesday i return home for two weeks and i wonder where i will have to leave mala moja then. I like the Normandy 🙂

Post script. I like to think of myself as being an optimistic realist. A saying goes that there is only three types of sailors: dead and retired ones, pessimists and beginners. And i’m not really sure about it but i do have the impression that i catch myself with an awful lot of pessimist thoughts… hope this is not permanent.
And now, off to fishing!!

Post-post script. Actually i like to sing the above song from the Shout Out Louds with replacing “Normandie” by “Brittany” as i’ve had it in my ear all the time when i arrived there with the Tres Hombres last year. But i guess i like the Normandy too.
And now, really off to fishing!
I’m hungy.

Postpostpost: here’s a tide-ebb comparison picture for Fécamp harbor that i just made.

(Cover image: fishing boat off the cliffs east of Fécamp)