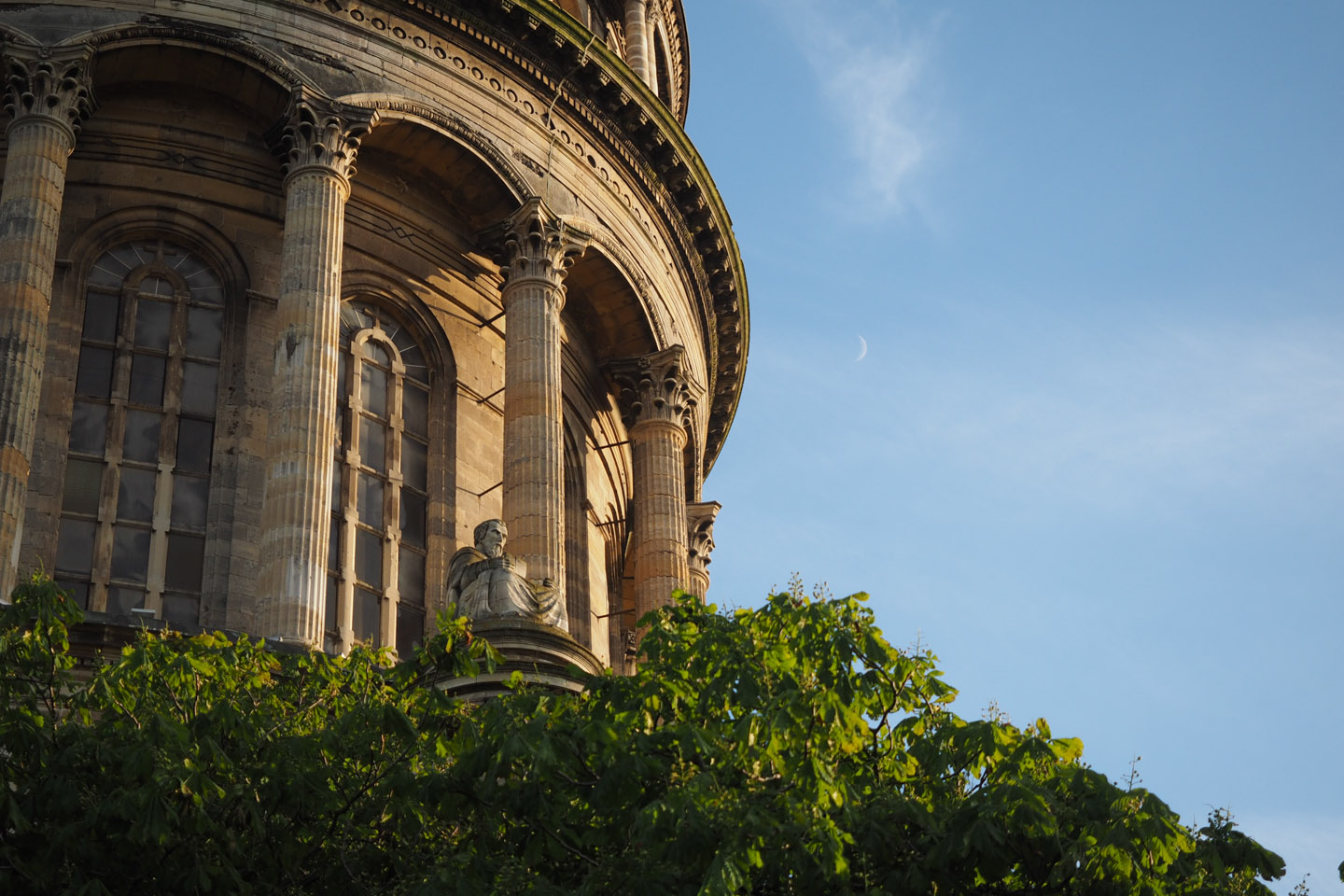 The delights of France

In Boulogne-Sur-Mer i arrived fairly early, so i had time to explore the city and have a glass of (french) wine in the old part of town (the historic city center is within ancient fortified city walls). Together with the sunny day it really lifted my spirits. Or, as the Freedom-couple put it: the water here is bluer than in the north sea, the weather sunnier and the wind is blowing… nothing to add 😉
Besides i had a sip of skipper’s rum with Hermann from S/Y Freedom (S/Y is a common abbreviation for sailing yacht) for crossing the Dover Strait and reaching “the Channel“, the world’s busiest seaway. And no, it is not men only, Sabrina simply didn’t want one. 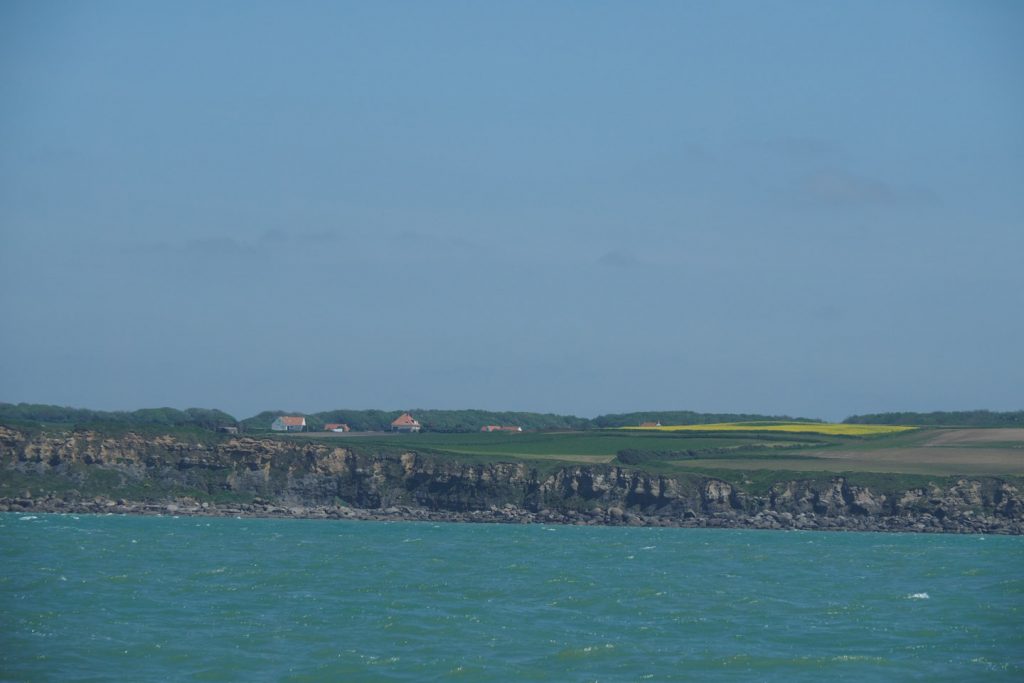 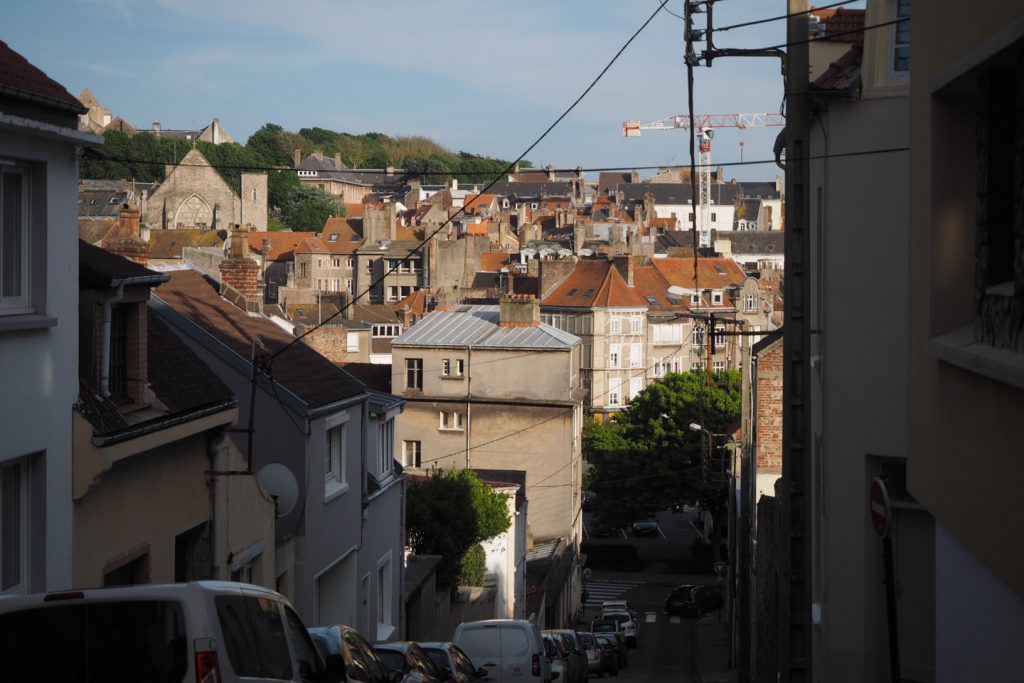 Unfortunatelly the wind-part did not hold true for the next day when we went for another long leg towards Dieppe. The whole stretch (10.5 hours) i had to go by engine. I had the sails up to generate a bit of additional speed, but that was more to comfort myself. The little wind there was came from dead astern and was of little use. Since the sea was completely flat it was at least a very calm ride. And besides some small works on the boat i could finished my book (One hundred years of solitude by Gabriel García Márquez) and start a new one (Tamata by Bernard Moitessier). 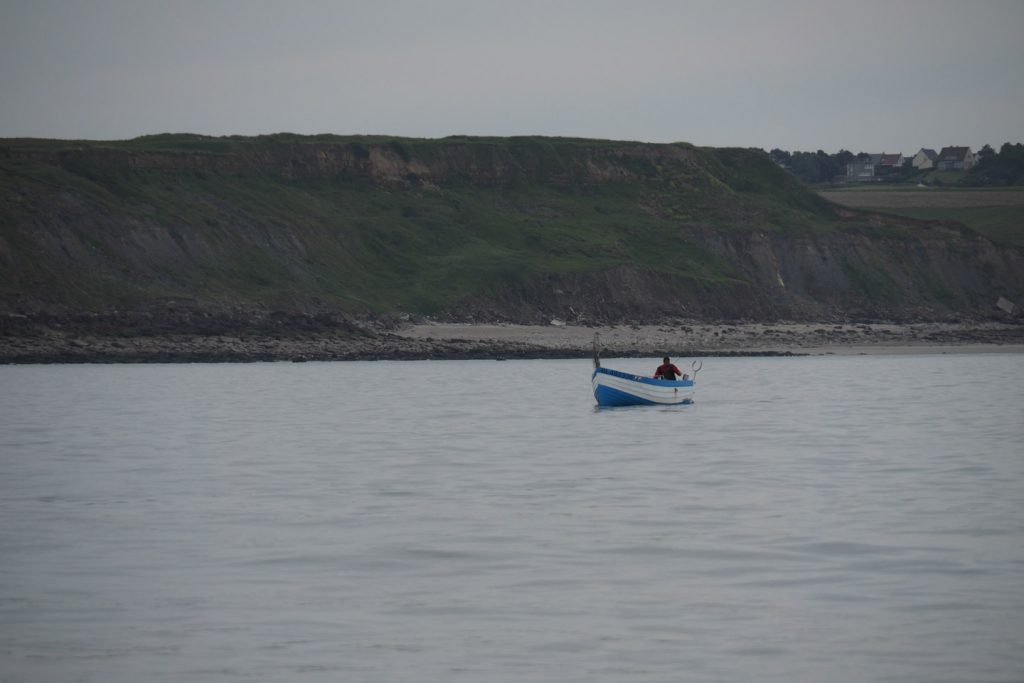 Fisher in calm waters on my way south 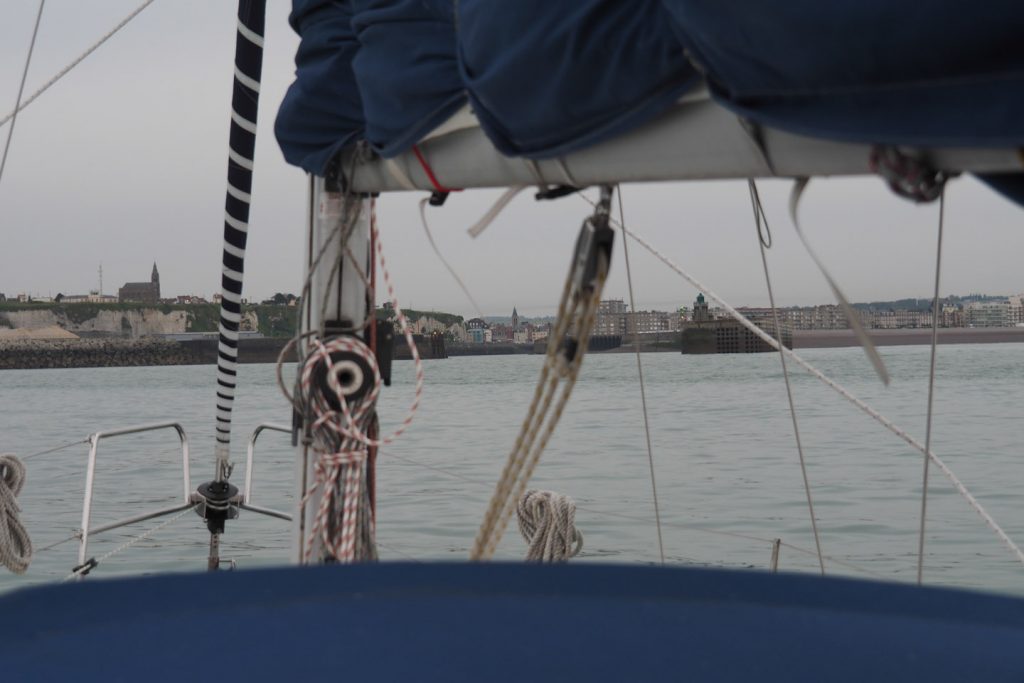 Strong current in front of the port entrance (i am heading towards the green tower on the right, despite pointing very left 😉

In Dieppe i arrived very late. Too late for the harbor office still being open. And too late for the kick off of the European Championship (soccer). So i had a quick shower on board (the 2nd on board) and then took off for the first bar i could find to watch the 2nd half. Turns out, i was just in time. The second half was interesting to watch and with a victory the French were pleased and started partying. I joined a band of guys who were in town for a soccer tournament themselves and had a cool evening. 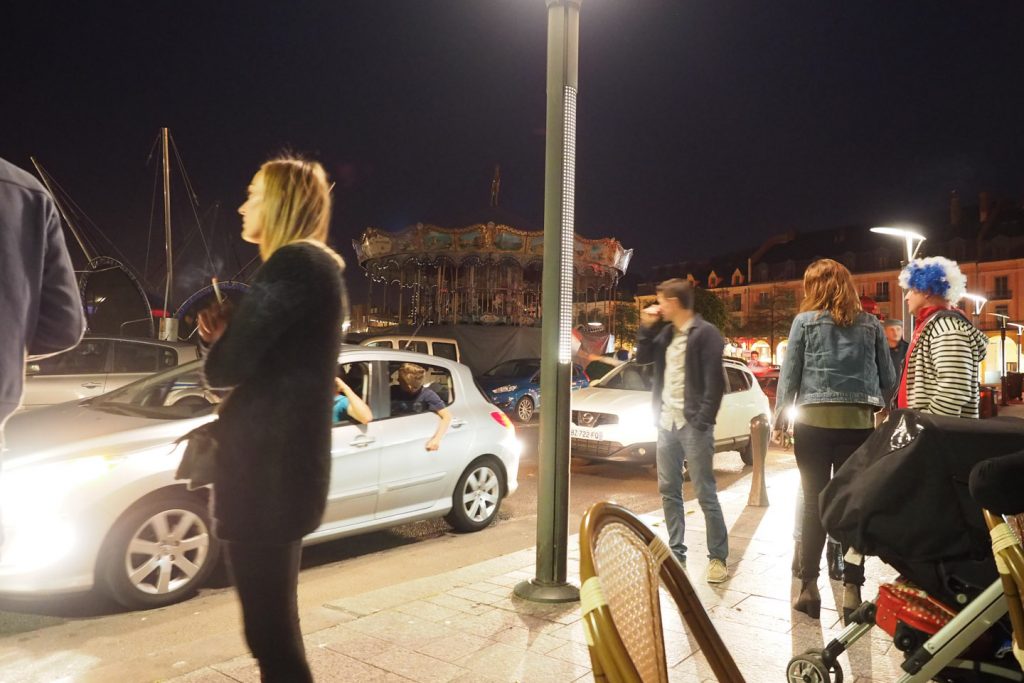 Yesterday i wanted to do some shopping (maps, gasoline, ladders and stainless screws for the boat, some fishing gear and groceries) for which i hit the city roads by bike. I saw the city, but failed to find any of the necessary places… so i accepted faith and sat down for a glass of wine at a picturesque square of the beautiful town. 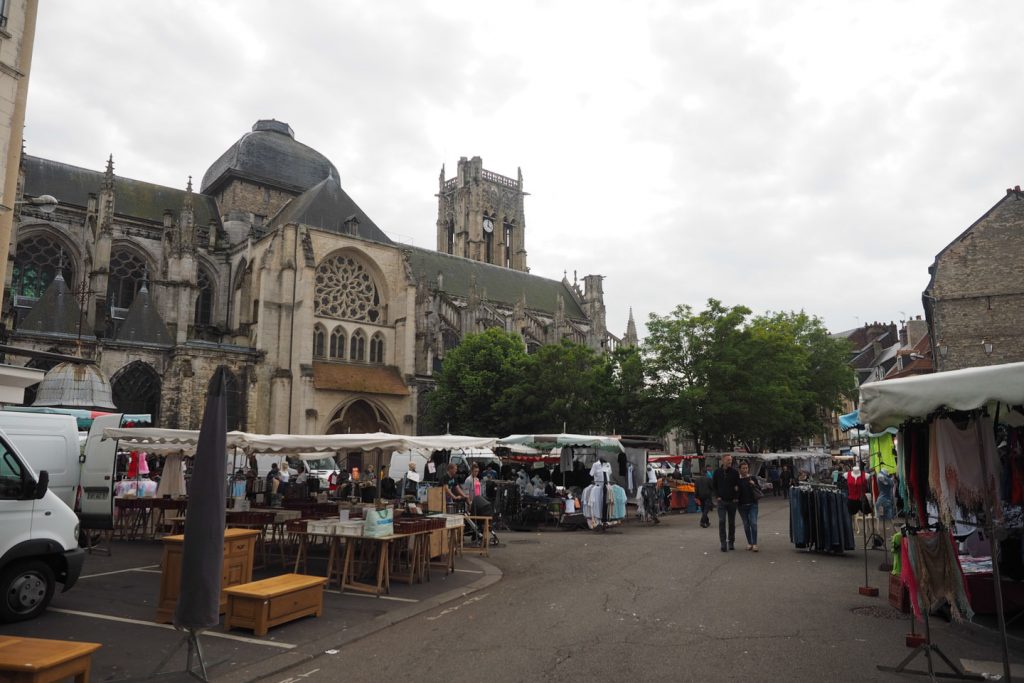 Market next to Dieppe’s cathedral 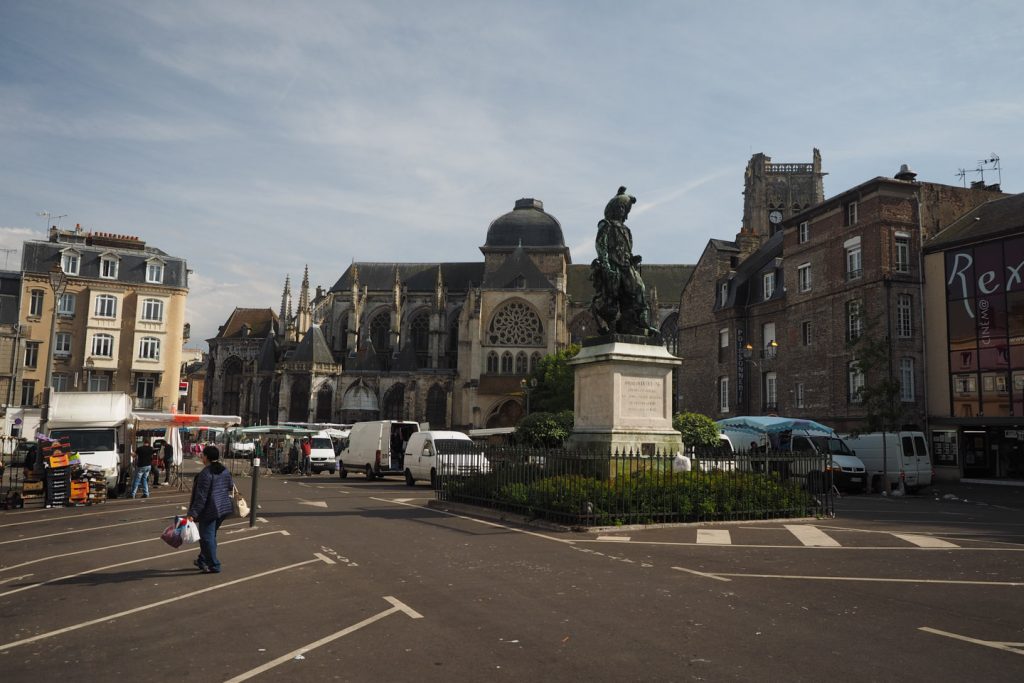 After market square – with sunlight 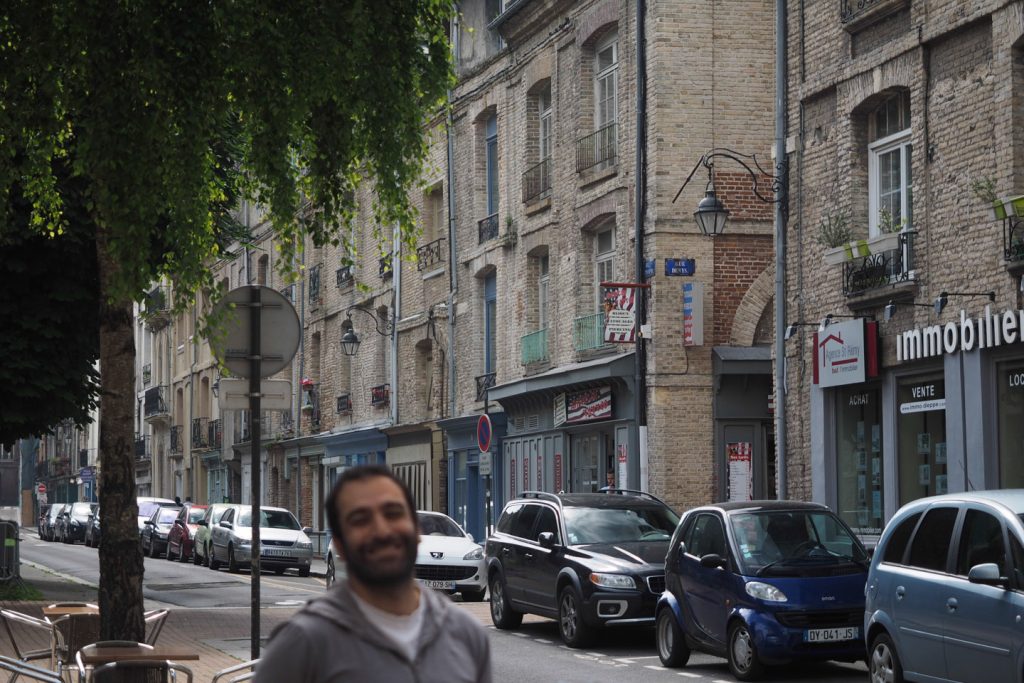 At a café in Dieppe

And so, here i am. Sitting in France, typing these lines and enjoying french life. Despite it being the north coast, it feels so meditteranean to me. The coastline changed from flat to cliffs with green meadows and sheep or cows on them. Today it’s a working day and i have to figure out my route for tomorrow. It’s west with the options of Le Havre or Cherbourg. Cherbourg is over 50nmi and has the downside of taking me 10-15nmi south, which i have to make up north again when going to Cherbourg. Cherbourg on the other hand is a 110nmi – which means over a day at sea. With the TSS limiting free space in the north, the coast close and fishing traffic this is reasonable for Sabrina and Hermann who can have a watch-change, but not for me. Or it is north to Newhaven, England. 65nmi are doable within daylight and without sleep (12-14hours). Especially as the current does not matter when crossing the channel – it takes you the same way west as it does east. So you can just go straight. Then again, if i cross the channel, i miss the opportunity to visit the site of the D-Day landing…

So it is ale in England, sailing in the Solent (the “Mecca” of sailing), hoisting the english flag (adding another country to my list) and crossing the channel versus the french coast, D-Day landing site and not having to cross the channel.
It’s hard for me to make such decissions. 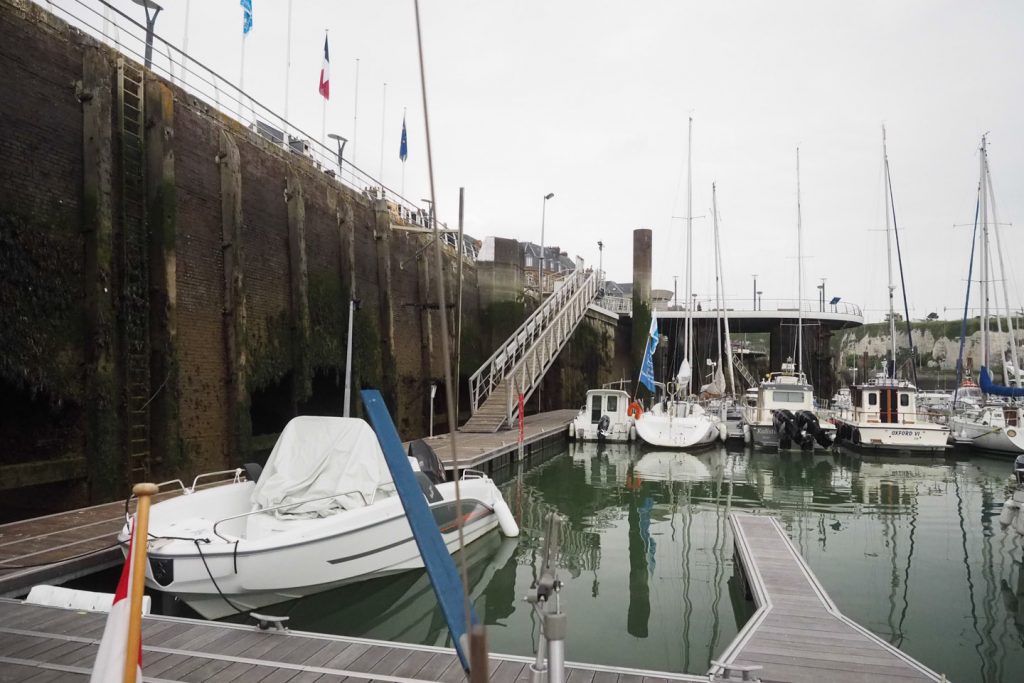 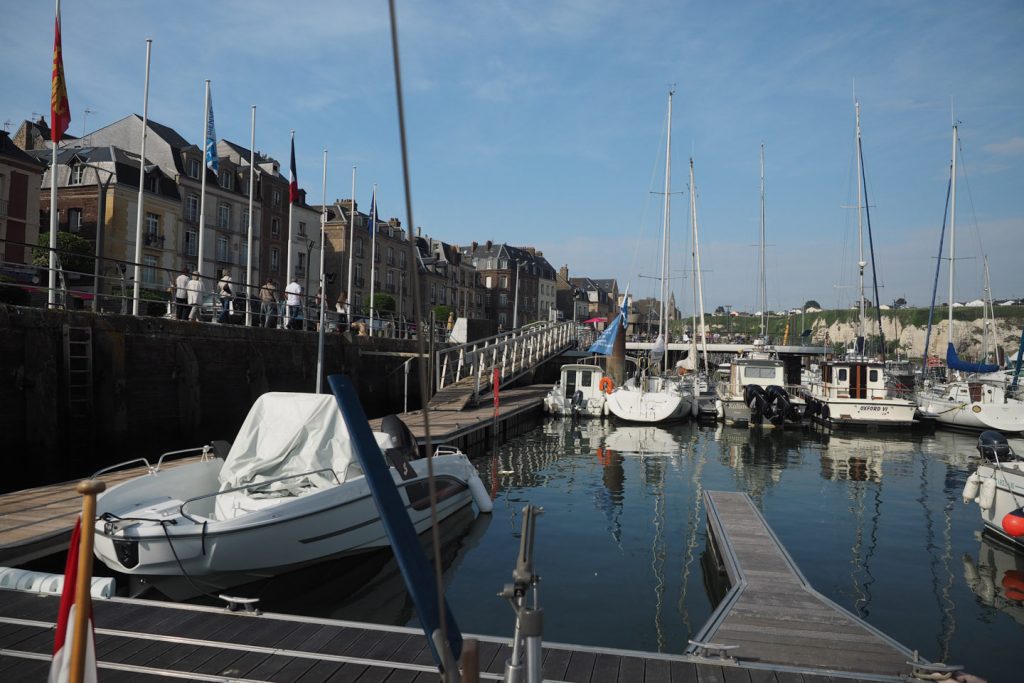 P.s.: It is really fascinating to see the huge impact of the tide here. In Dieppe there is a differnce of 8m (at spring tide) in the water levels. So it’s up every six hours and down every six hours. Just imagine what masses of water are moving here…