Thursday, October 26th, 2017. – Vienna, Austria
(Note: my camera broke down before this leg of the trip, so i only have smartphone pictures – sorry!)

It’s 7 in the morning. It’s national holiday in Austria, i’m sitting in Vienna and insomnia is sitting in my neck. To distract my my mind i decide to write a short post for mala moja‘s blog, which i neglected during summer. Just a quick note actually. But every story needs a setting, i cannot just jump in.

My brother Joško and his great friend Andi came to join me for a one-week trip on mala moja. We met in the beautiful city of Alicante and our goal was, well, promising to say the least: Mallorca. Palma de Mallorca, to be precise. Growing up in Austria you are bound to hear about the German passion of Ballermann. On Palma’s beach there are 15 same-looking beach bars, lined up one next to the other with a distance of less than 300m between. Those are numbered and actually named “Balneario” (Spanish for “spa”). Beach bar number 6, for some reason, grew a hot-spot for German tourists, which called it “Ballermann 6” for simplicity. But nobody needs the “6”, since “Ballermann” is synonymous for “Ballermann Sechs”. Year after year thousands of Germans pilgrimage to this place to worship the god of party and alcohol. This place is a living myth.
(Note: today Wikipedia is not my friend, already wanted to link to it twice, but the articles are not available in English.) 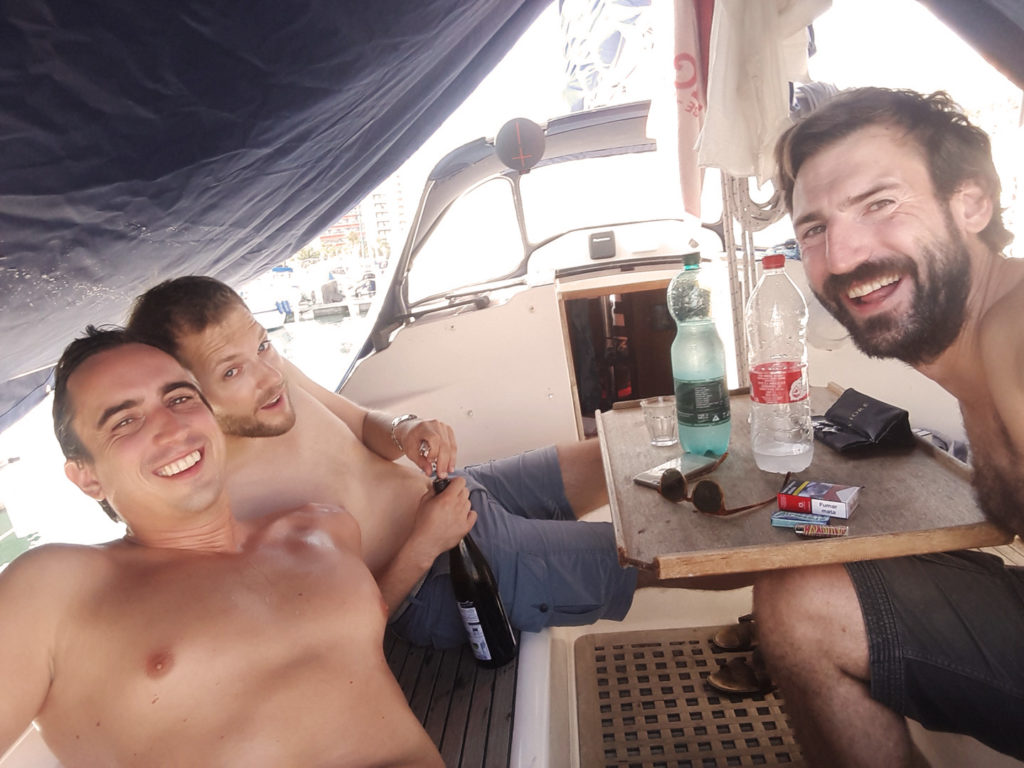 The big planning of the pirrrates 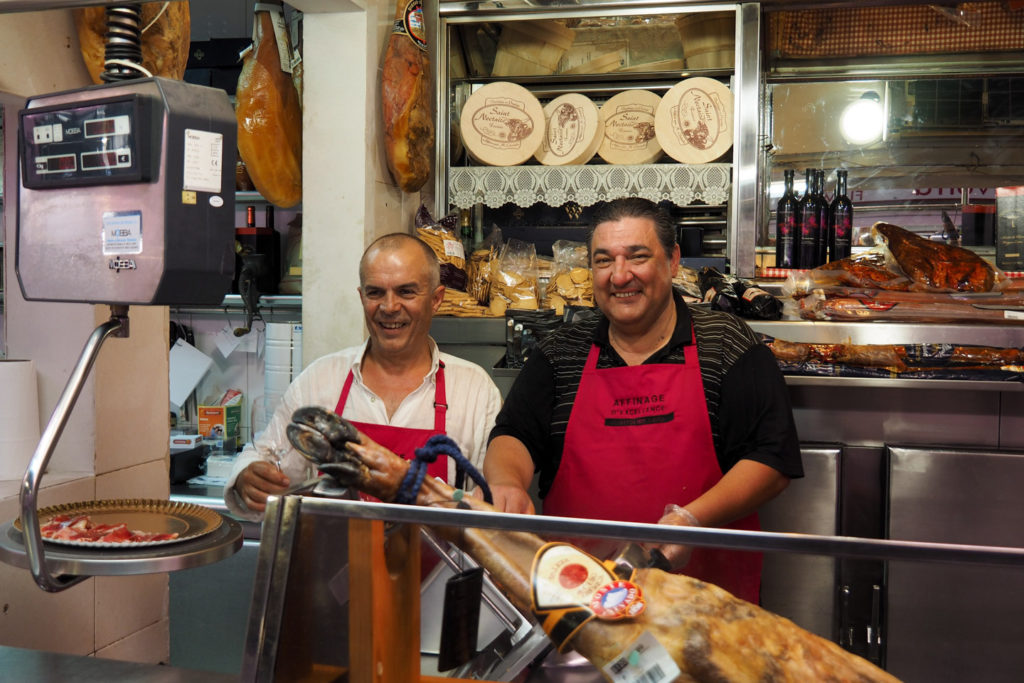 So we had a goal, but back to the start. We met in the beautiful city of Alicante, which by the way, was the start of the Volvo Ocean Race last Sunday. Probably the world’s most extreme sailing competition. Joško and Andi had one-way flights to Alicante and from Palma, so we were bound to do the trip. In the case of bad weather, they would have to get a ferry. But we were lucky, the weather was calm. Partially even too calm. So, after we did our provisioning, we sailed and motored eastward. The provisioning was the most that mala moja was ever loaded with groceries. With water, beer and wine, to be precise. 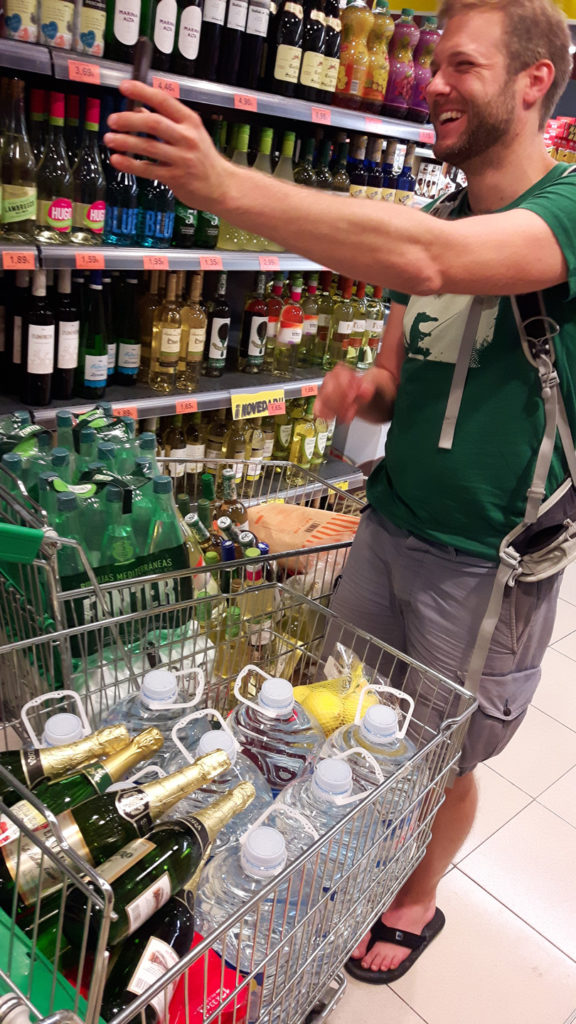 Getting the boat loaded. To the brim.

From Alicante we followed the Spanish coast until the evening. This way we were still within cellphone coverage and could get the evening weather report. The sun was getting ready to sink, the weather report got in and we set our course for Formentera. Since we were pirates, we had a few empty bottles with us. And what do pirates do with empty bottles? Arrrr? Arrrr! They use them to send messages to their friends. And so did we. Strip the bottle of any plastic, use a natural cork and your envelop is environmentally correct. This may have started as a fun thing (well, we all know that it actually is a serrrrious means of communication!) but it evolved into a habit that i kept for the rest of my time on mala moja. Every once in a while, i dropped a bottle with a message into the ocean. 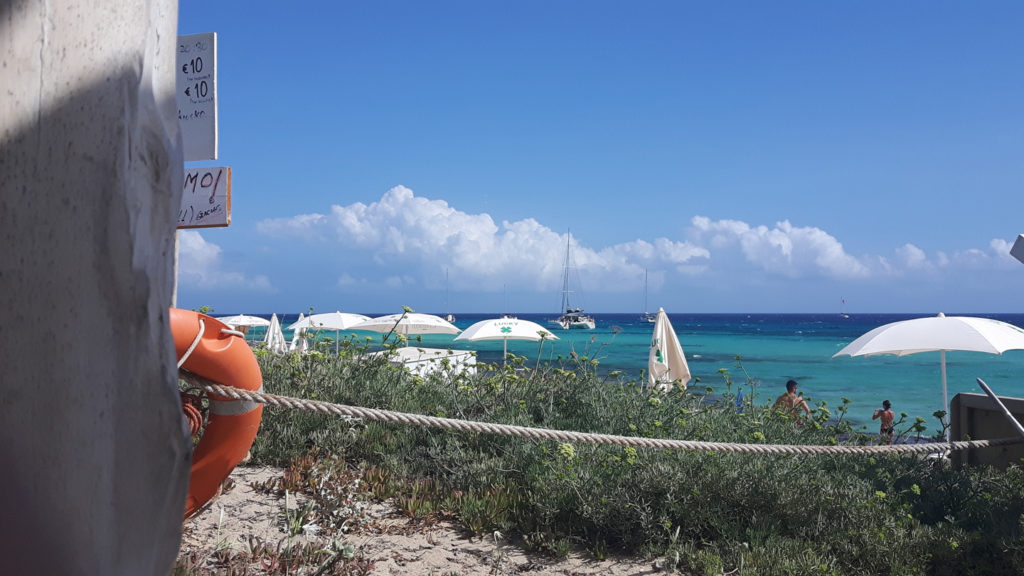 Anchoring after reaching Formentera, taking in the caribbean feeling

In the morning light we started to see Formentera and the wind turned against us. In the hope for protection on the lee side of the island, we headed for the island’s south coast. Tired we dropped our anchor, protected from the waves by the island and did what a pirate has to do, every now and then: eat. So we swam to the shore only to find out, that the good looking restaurant would not server pirates (they closed early afternoon). In the search for food we wandered on and found a picturesque beach bar. So we did what every pirate prefers to do: drink! And while in the bar i had one of my first insights on the Mediterranean islands: they are beautiful! The beach was… Caribbean. The palms, white sand, blue turquois water, warm wind… Arrrr! 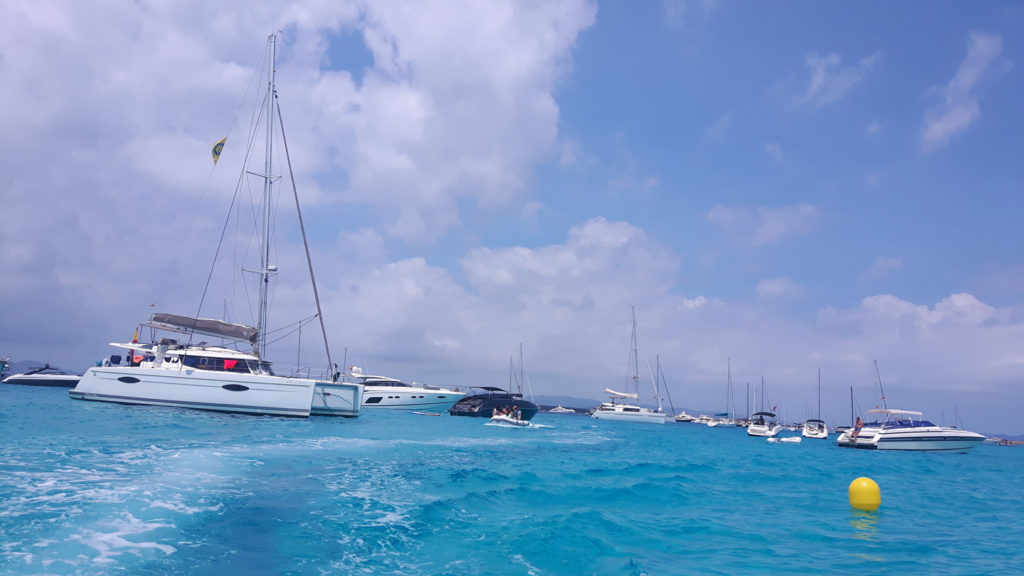 Since we clogged the boat toilet, we had to sail to the only marina on Formentera, which is in the north of the island. In the marina we had a major misunderstanding. For some reason they did not understand that WE were the pirates. So instead they robbed us. 155 Euro, that’s onehundredandfiftyfiveeuro in words. That’s what they charged for a single night for mala moja – a boat of less than 10m. And so came the second insight regarding Mediterranean islands: they know that they are beautiful.

It would have needed a major storm to keep us in that marina another night. But we had our promising destination and the weather was good, so off we took – for a few miles. 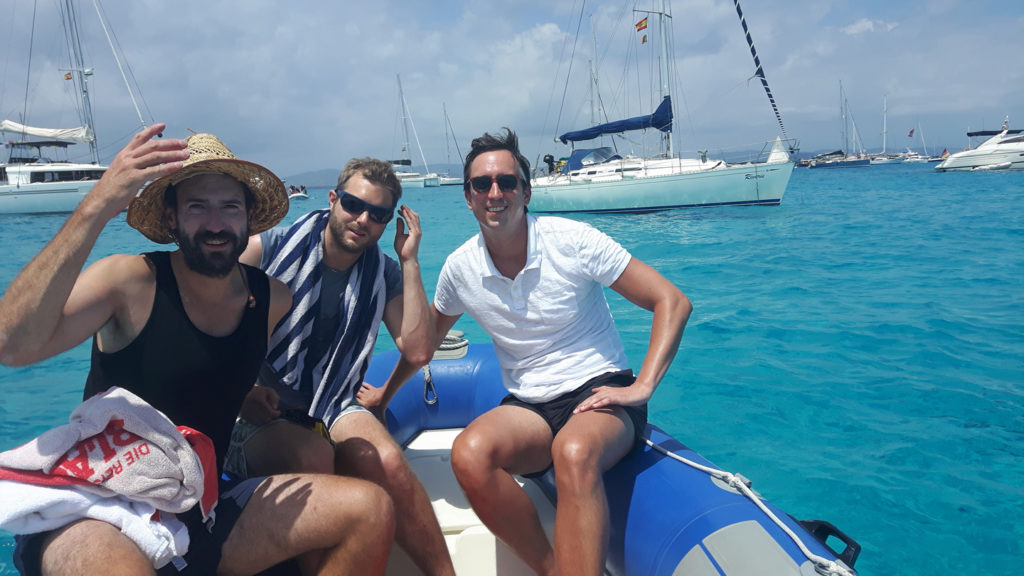 Mala moja at anchor off Formentera; pirates en route to board the beach restaurant… 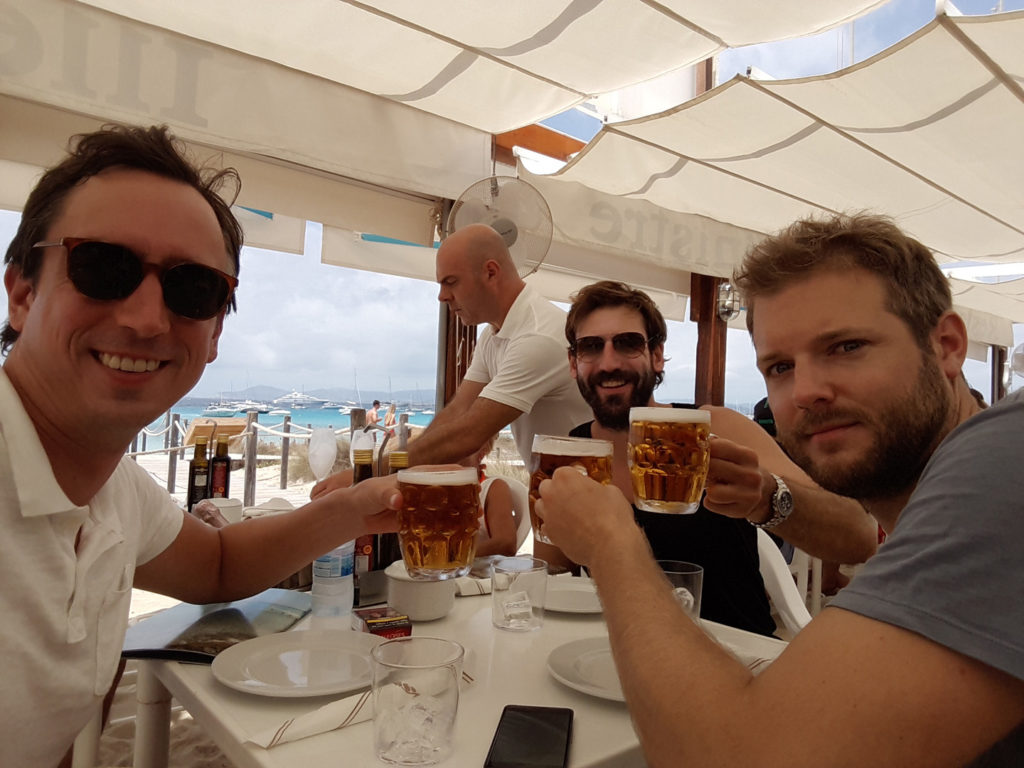 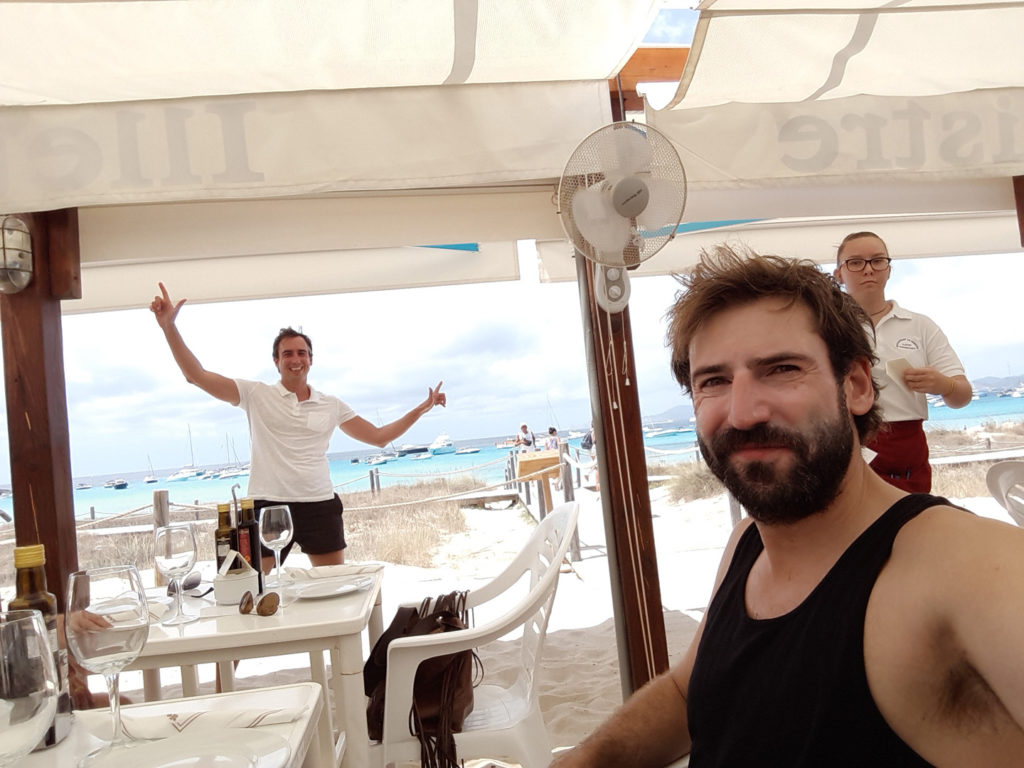 … before heading for Mallorca … 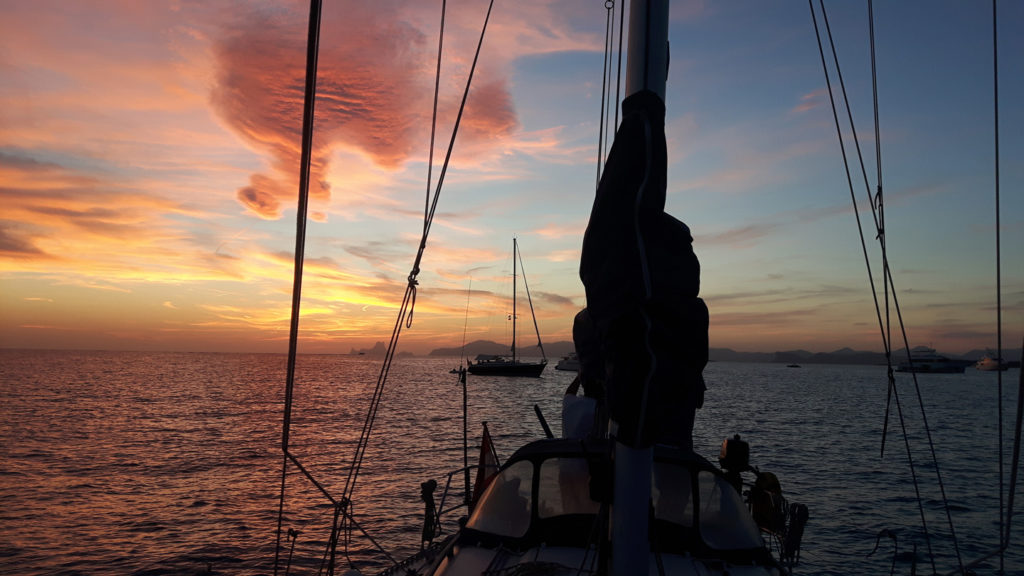 … after preparing mala moja for the next leg in the last daylight.

With Joško’s birthday being the next day, we dropped our anchor just a mile outside the marina. In the middle of a few hundred other boats who enjoyed the island’s beauty. Well, we finally did what pirates do best: we boarded the beach restaurant and had a feast! After the most expensive Aperol Spritz i ever had, we headed back to mala moja and set sails for Mallorca. A calm night and a few message bottles later we saw a sunrise over distant Mallorca. To celebrate Joško’s birthday we brought out the band (in modern times us pirates don’t keep slave musicians but use Bluetooth speakers), played Ballermann music, beheaded a bottle, heaved to and jumped over board for a morning swim (one at a time, we are pirates, not fools). With this we were ready for the final hours of sailing. 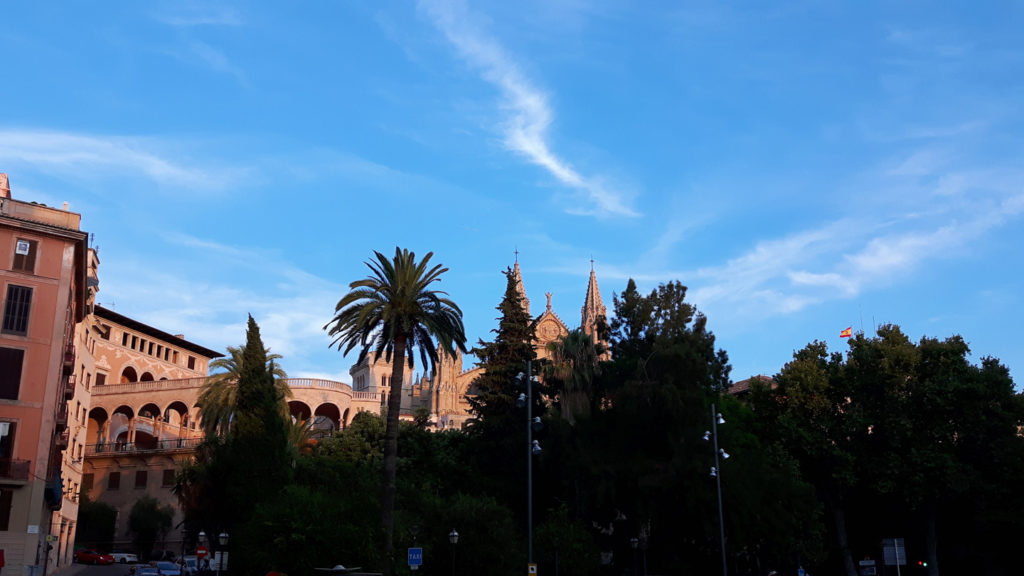 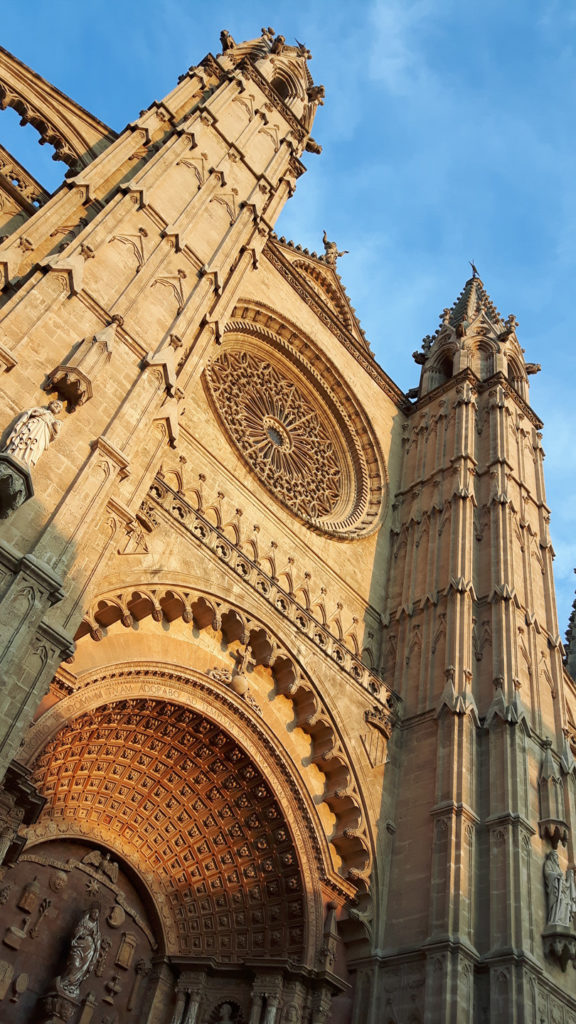 … but the cathedral we visited only from outside. Pirates prefer not to pay entrance. 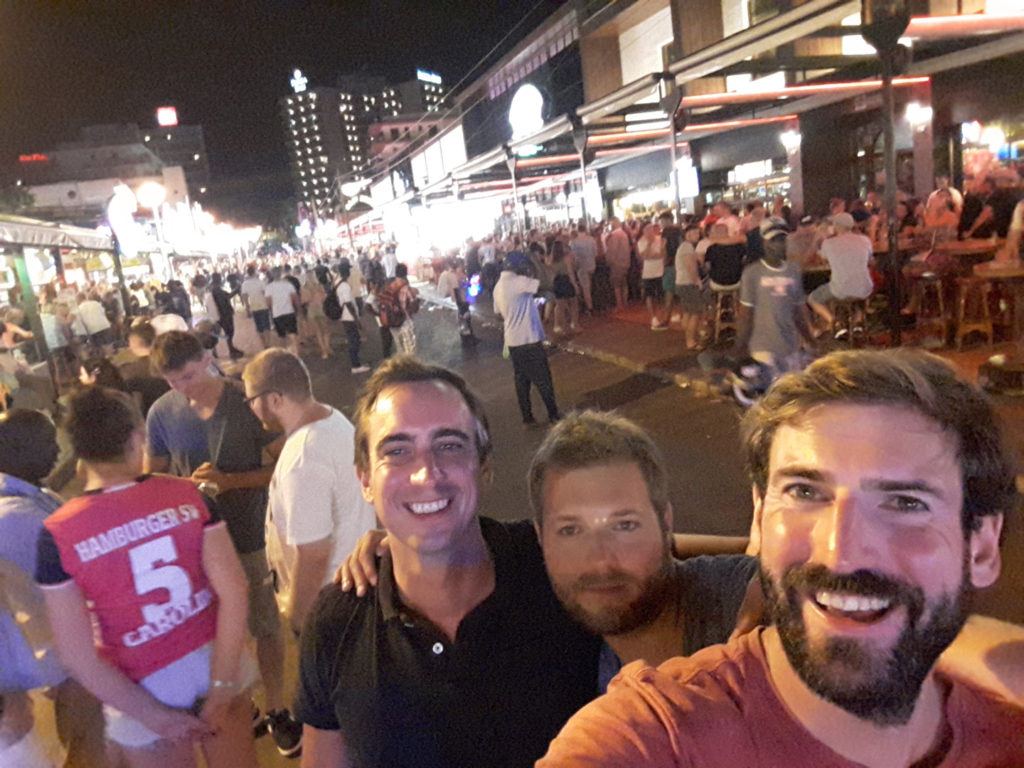 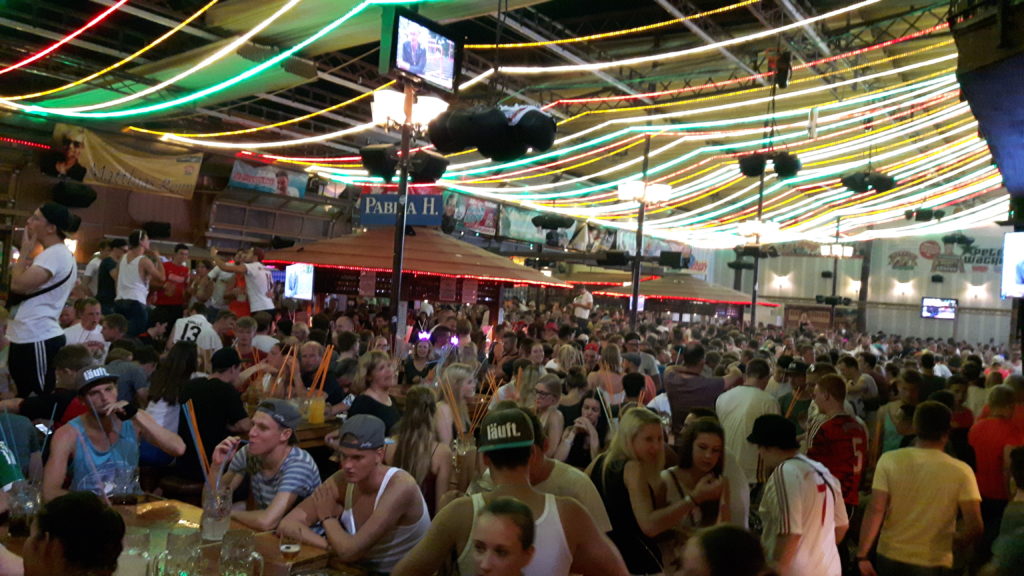 Inside the Bierkönig… Oktoberfest all year round! Excellent for pirates… ARRRR!!

Respected as we were, we were greeted by the Spanish king. At least we thought that he was friendly waving when he came shooting at us with his boat. And 20 others. Only as they flashed by us we could hear them cursing. We decided that he is probably a bit pirate too and thus also likes cursing. So, when we found a marina (there are 8 in Palma the Mallorca, none of them wanted us, but one finally took our money – and not too little) we had not only reached our destiny but also “participated” in a royal regatta. We decided to celebrate this properly. Being in Palma, the location could have been worse… We boarded a taxi, bribed the driver and stood there, in the Schinkenstraße (the street that belongs to Ballermann). Childhood dreams came true. All our tiredness was gone as we entered the Bierkönig and claimed our first beer.

All good times come to an end. My fellow pirates had to leave and so did summer and i. But, nobody can take your memories. And in my case, they come back every now and then. For example, when you get an email from people who you never met, but who have found your message in a bottle… 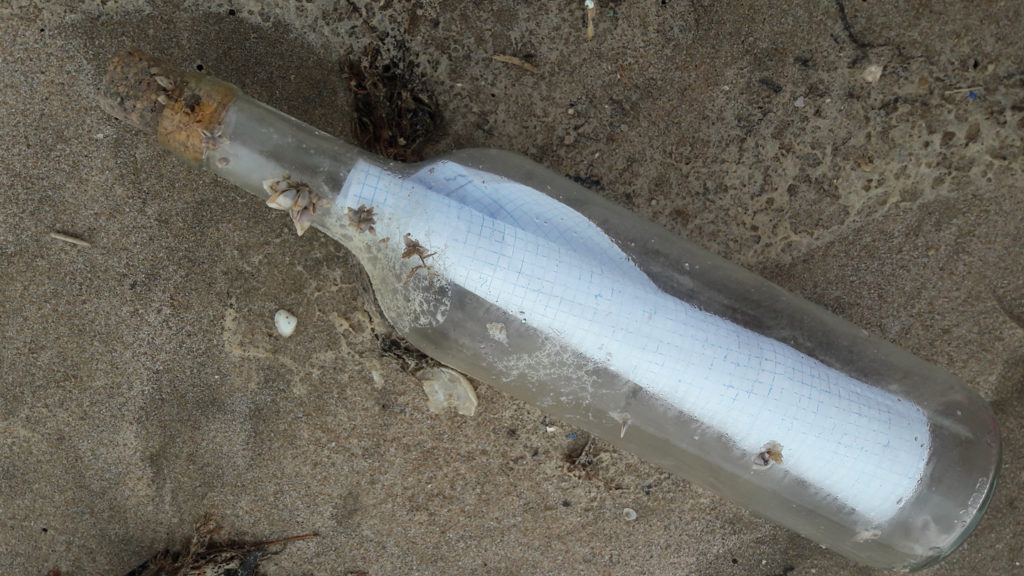 Our message in a bottle, found after 200miles afloat… 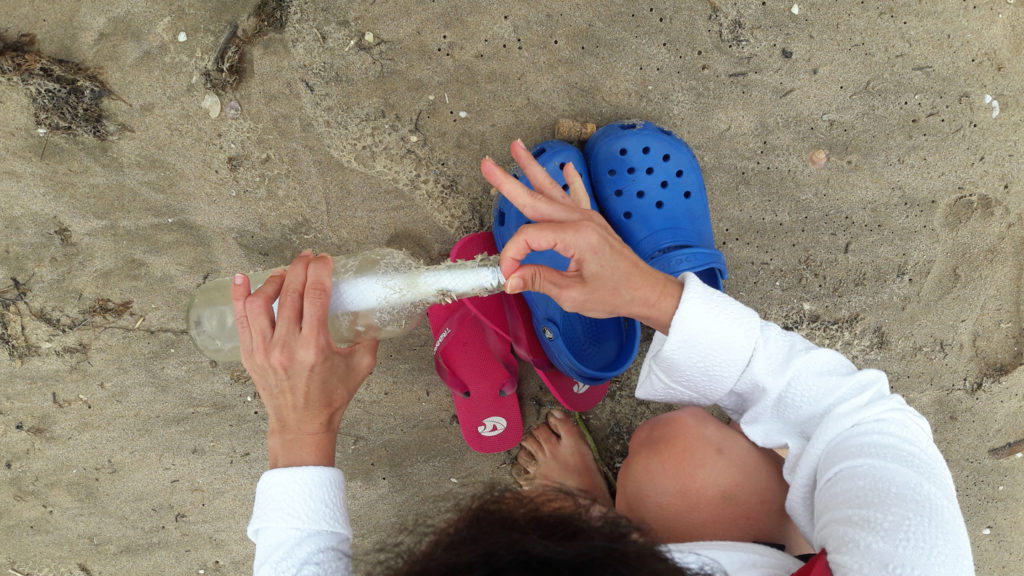 … by two sisters south of Valencia.