A boat needs to float

Why am i here? Sitting on a boat somewhere in the south of Spain, alone, on a Saturday evening in late May.

I started to write this “first” blog post already four times. And failed four times. This is the fifth attempt.

It is not that i did not know what to write. Actually i would have a ton of things to “report”. Or more precisely: to list. All the things that happened since my last post, including repairs, work, preparation and changes in life would fill far more than a single post.

Partially it might have been the lack of time, that i did not finish any of the previous attempts. But that can always be only half true, as we don’t simply “lack” time. Instead we lack time for things that are not “as important” to us as are other things. Or because we have a bad time management and waste it on things that are not important but seem to be.

Partially it might also be, that i did not know what to write. It does not make sense to me, to put together just a list of things and/or events that took place in the past.

Maybe the answer lies within the initial question. Why am i sitting here? What brought me back to mala moja? Did i not have enough solitude yet on my past trip? Did i not see enough? Did i not face enough of my own fears? Was i simply too lazy to sell mala moja? And maybe there simply is no “reason”. Neither for not writing nor for sitting here.

And maybe i will find out in the days and weeks to come. 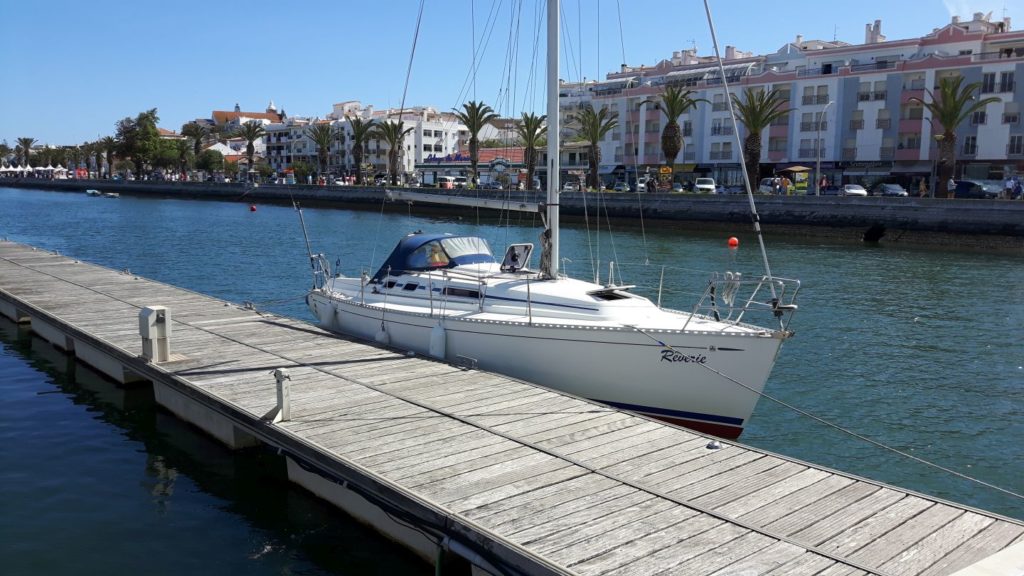 Afloat after half a year on the dry – mala moja still without sails and basically in winter sleep.

After having had a quite work-laden time when coming back to Lagos (Portugal) to get the boat ready (getting everything on board from the storage, cleaning the hull, applying the anti-fouling, finish the rigging and cleaning). I was just finished with the absolute minimum when my parents were already knocking on the door. But instead of spending some days with trips around Lagos we immediately took off to sail eastwards. I feared that we otherwise might not make it to Cadiz (Spain) where Meli and Marko were to come to a few days later. Within the next 7 days we were sailing on 5 days covering 180 miles. One of the sails took us 10 miles up the Rio Guadiana, which is the border between Portugal and Spain. This was a really great trip. Some people spend a week discovering the roughly 40 miles of it that can be explored by boat – and i can understand them. 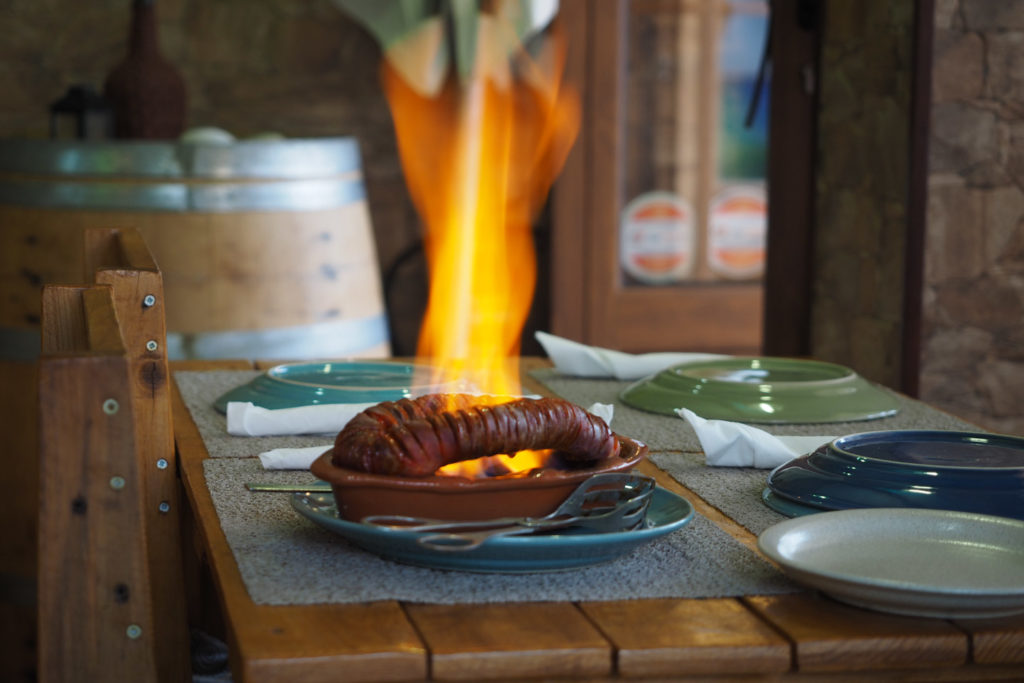 My last supper in Portugal with mala moja… i really got to love this country. 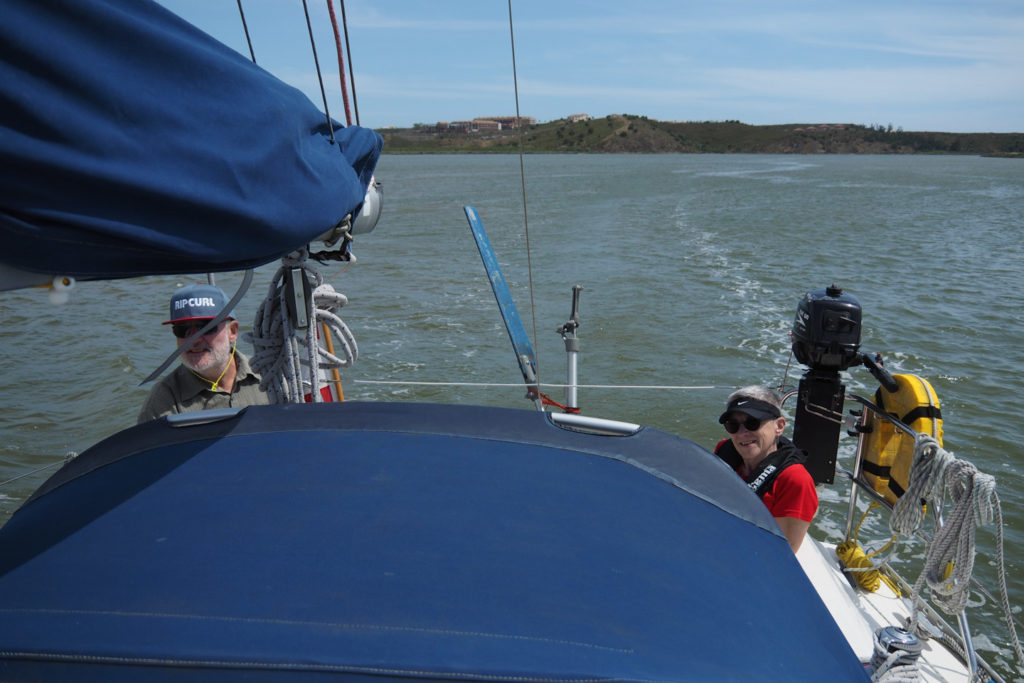 Tripping upstream the Rio Guadiana. Up with the flood, down with the ebb – makes things smooth 😉 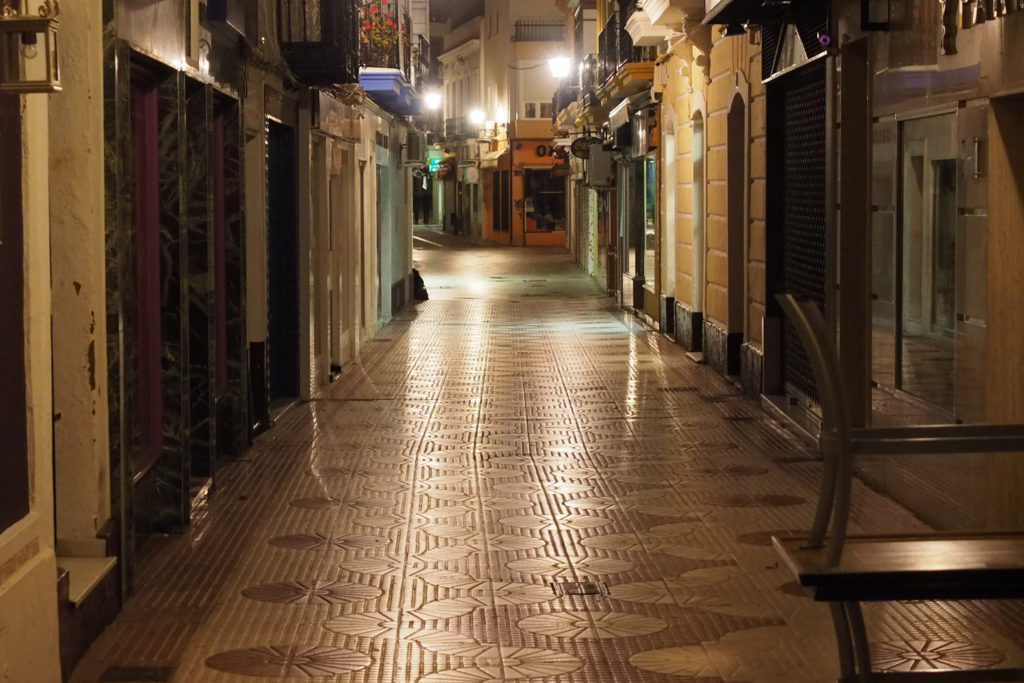 Walking throught the Cadiz night after Tapas with my parents 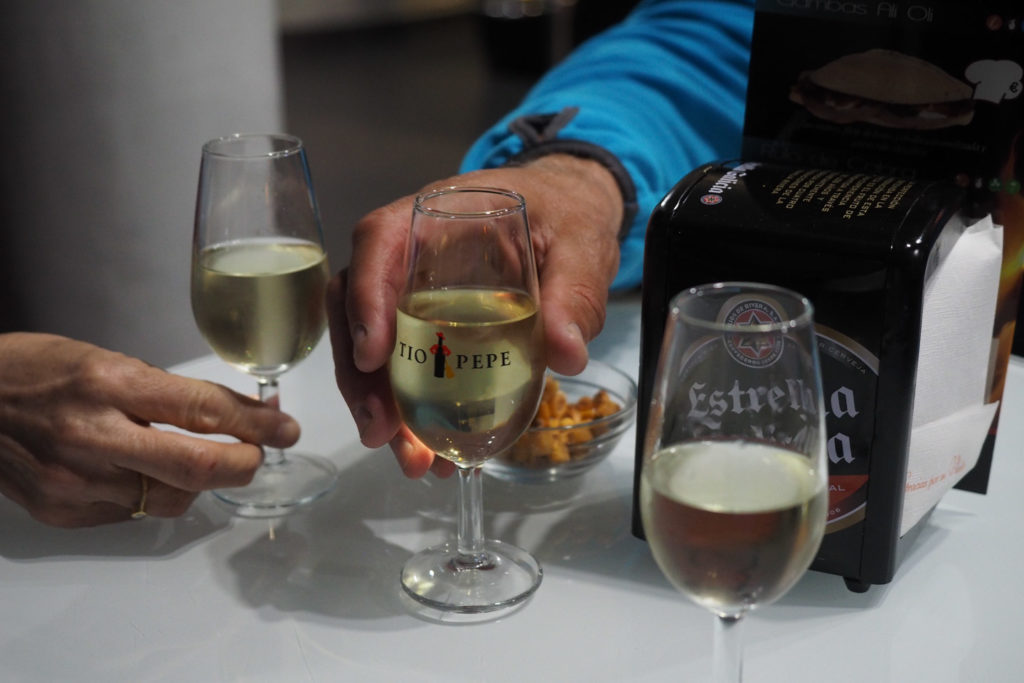 No, its not Sherry, it’s Manzanilla. Same same, but different. Sampled in Chipione…

When the crew changed in Cadiz (Marko and Meli for Tili and Lero) – which by the way is a really beautiful city – i was hoping that i will have a bit less of a time schedule. But the weather forced us to keep on going. There was a weather window for passing the Strait of Gibraltar which was about to close in two days. After that it would be 5-7 days of waiting on the Atlantic side of the strait, while gales with gusts of almost 50 knots would whip in the wrong (westerly) direction. So the first day after their arrival we headed for Barbate, the last marina in the West before the Strait. And from there it was another approximately 40nm to the Bay of Gibraltar. 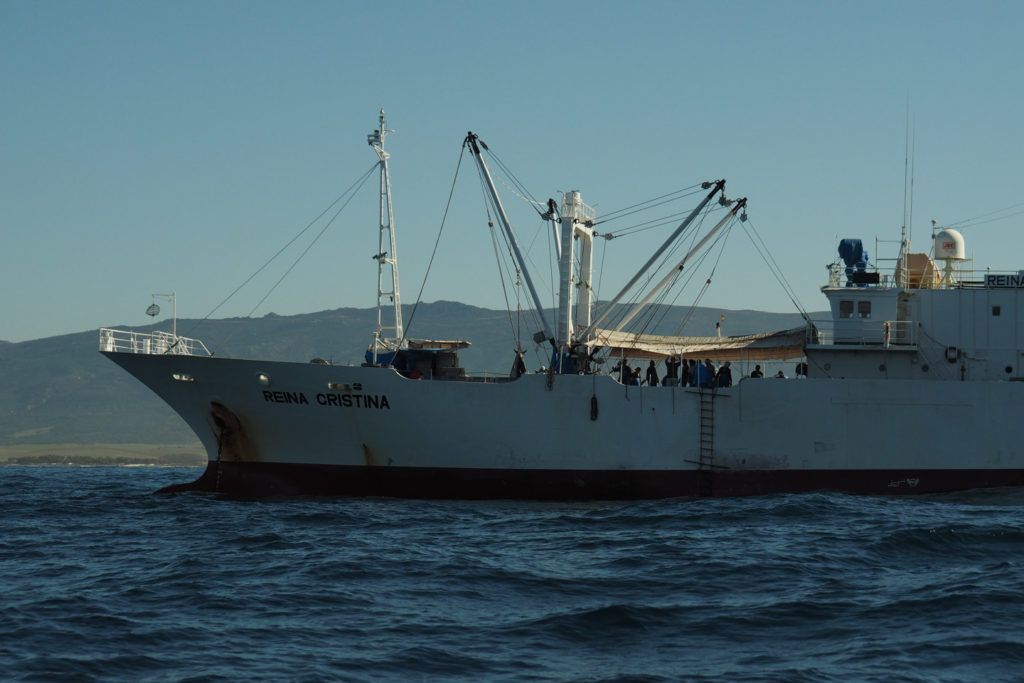 Tuna being loadad from a fishing vessel onto a (small) cargo ship. Yes, that fin you see IS a tuna. Huge they get 😉 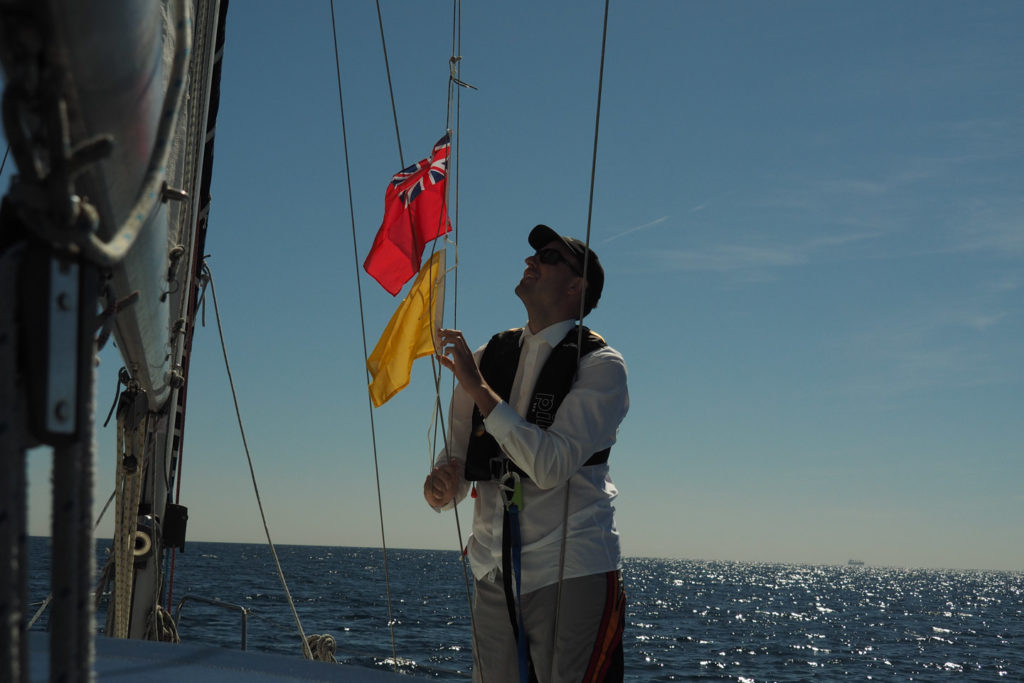 In preparation of entering the British waters of Gibraltar, Marko hoists the flag (and the Q for quarantaine – though only customs)

Short excursion about navigation in the Strait of Gibraltar:
The “narrow part” is about 20nm long and on the closest point the distance between Africa and Europe is less than 8nm. It’s depth varies from 900m to 300m. And everything that goes from the Atlantic into the Mediterranean (or vice versa) has to go through this little, narrow opening. Ships are the most obvious thing that crosses one’s mind. But sea life does so too. So, whales are a “navigational hazard” marked on the maps. The next problem is the wind. With the steep mountainous coastlines on both continents the wind basically only knows two directions within the strait: east-going (Ponente) or west-going (Levant). And due to the narrowing geography wind also gets much accelerated inside the strait.
And then there is the currents. On the surface, the water has a steady eastwards flow, as more water evaporates in the Med than can be replaced by its rivers. But there is also a westwards flow, albeit that is happening in the depths of the strait. The reason for this is that mediterranean water is saltier and thus (at same depth) heavier than that from the Atlantic. And finally one has to add tidal currents which are produced by moon and sun. What you get is a highly complex pattern that depends on wind, tide and “normal” current.
And it’s getting even better: There are three different streams in the strait. The northern one, close to the European shore, the middle stream and the southern one, at the African side. It is (more than?) wise to use that information to one’s advantage and not attempt to cross the strait in bad conditions. It has the potential for an orderly nightmare. 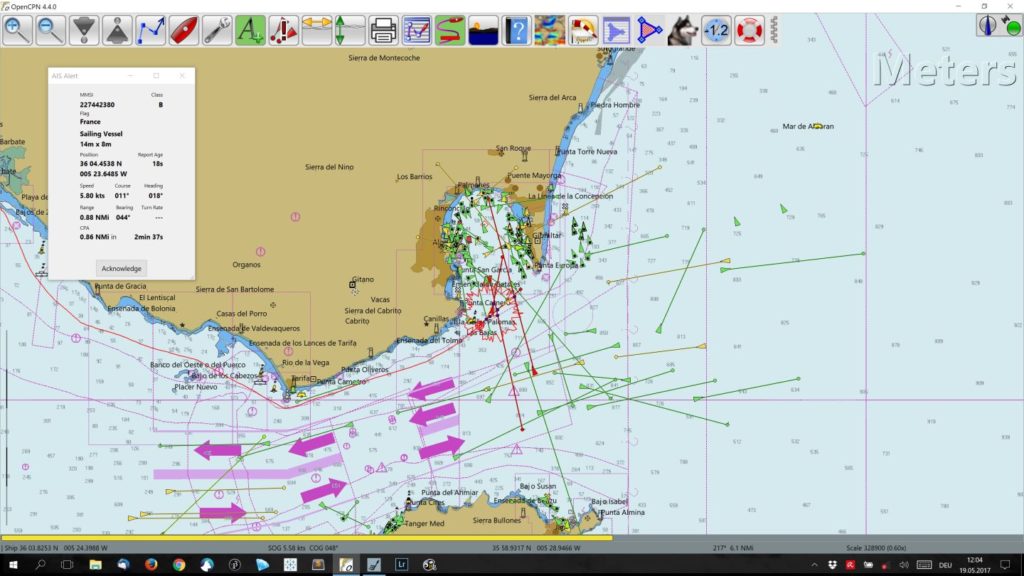 Yes, each green or yellow triangle is a ship. And some of them are going fast. Really fast.

Weather checked, currents, tides and everything else too, and off we went at 6 in the morning. No wind at all, just motoring, but we made it without problems and Gibraltar greeted us with dolphins. And heavy traffic. Having passed in front of Rotterdam (in fog) and crossed the Channel, i thought that i had seen heavy traffic. Turns out Gibraltar has more of it 🙂 But with calm weather, good visibility, two people as lookout and AIS (btw: you can check out worldwide AIS-traffic on Marinetraffic.com) below deck we arrived safely in the harbor at the same time as the first gusts of wind started to pick up.

The rock of Gibraltar is majestic. The city itself is not. It seemed like a bunch of human trash would litter the roads. The food was (partially) “a fusion of spanish slowness and english cooking-incapability” (copyright Marko) and the traffic is constantly loud and plentiful. Especially the last is really surprising in a city which is basically just a mountain with hardly and places to drive to. We stayed for three nights, walked the rock (up and down – not as easy as one would think, especially not after a night of more intense drinking) and i got some work done. 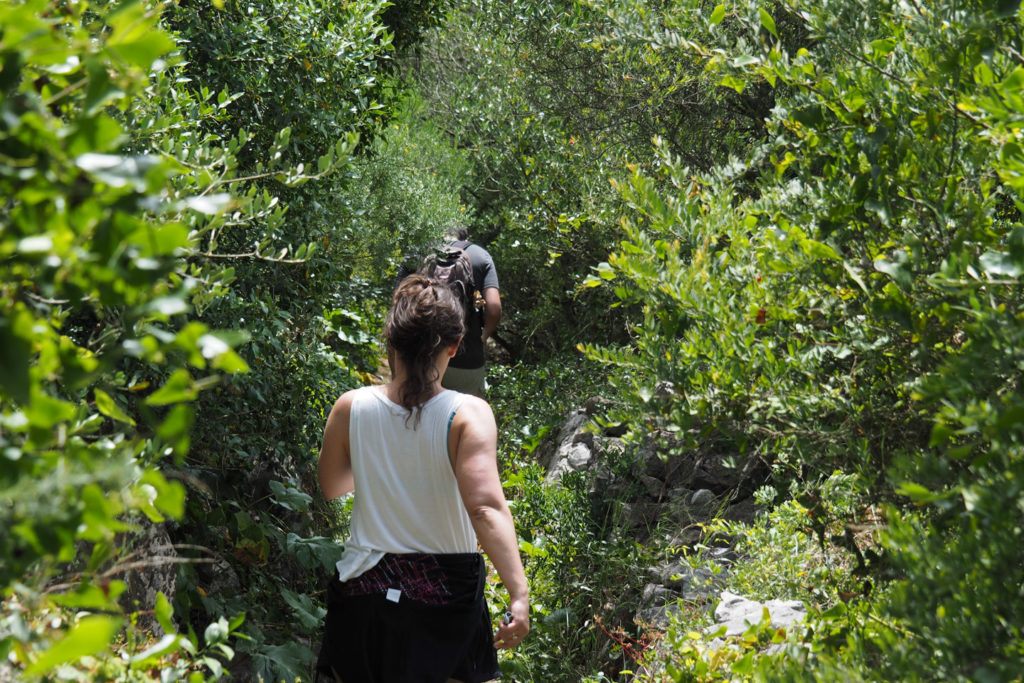 Yes, we did get a bit off track on our way up the rock of Gibraltar. But that’s what hiking is about. 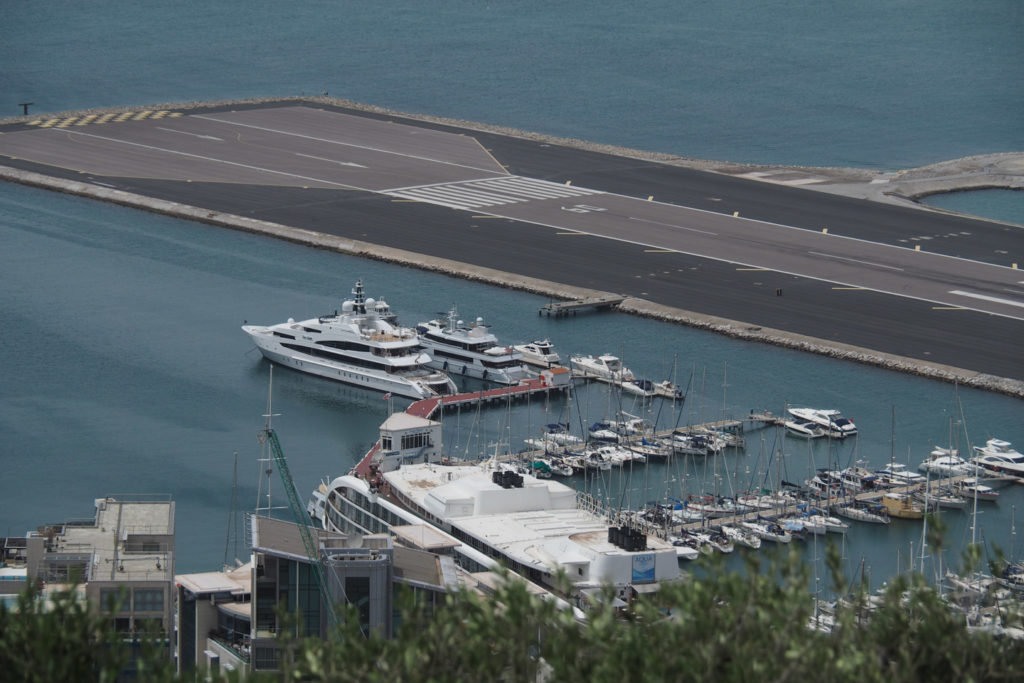 Mala moja‘s berth in Gibraltar (we are on the 2nd pantoon, just after the big motor-yachts). Right next to the airport 😉 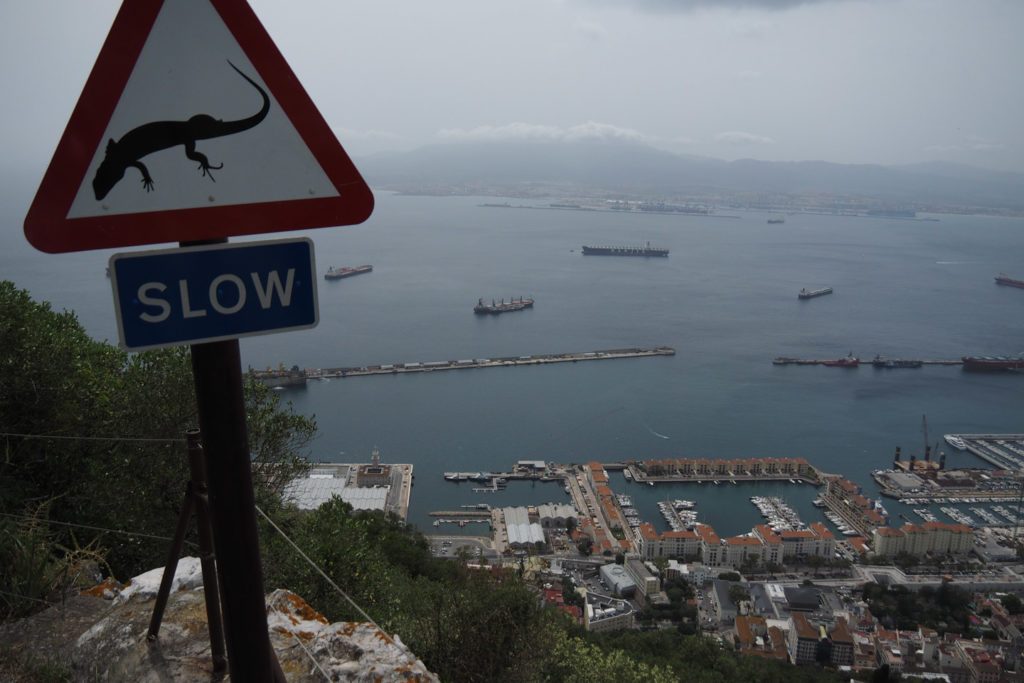 View from the rock onto the bay of Gibraltar

… and into the other direction (this is the Mediterranean), where ships are lying in the roads. 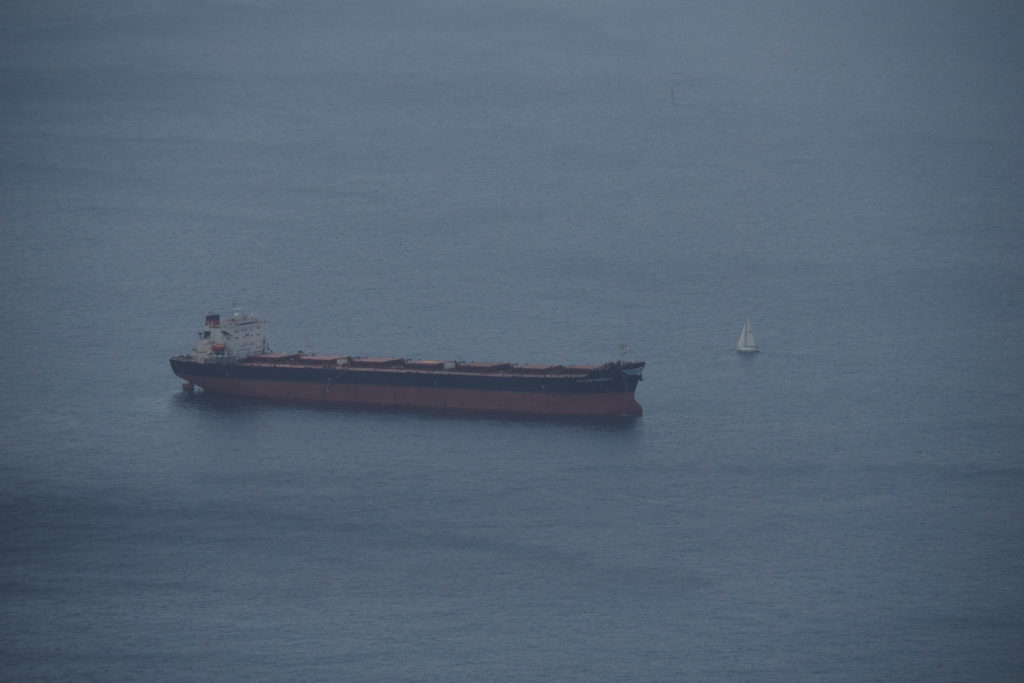 Just for comparison. This is the difference between a normal tanker and a sailing boat. 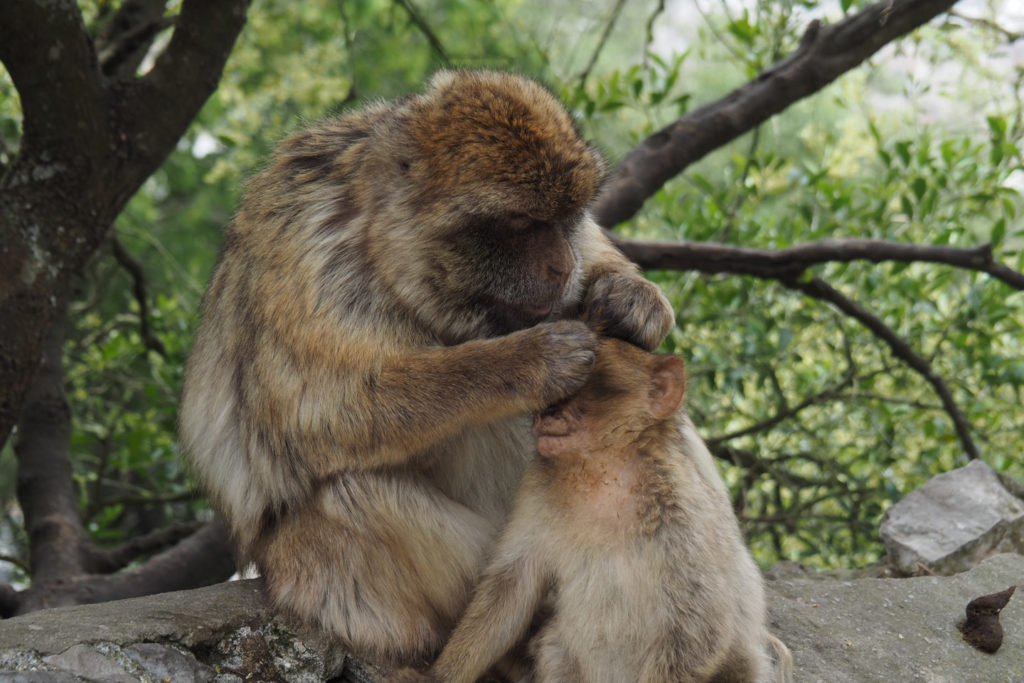 The inhabitants of Gibraltar highest up the ladder. 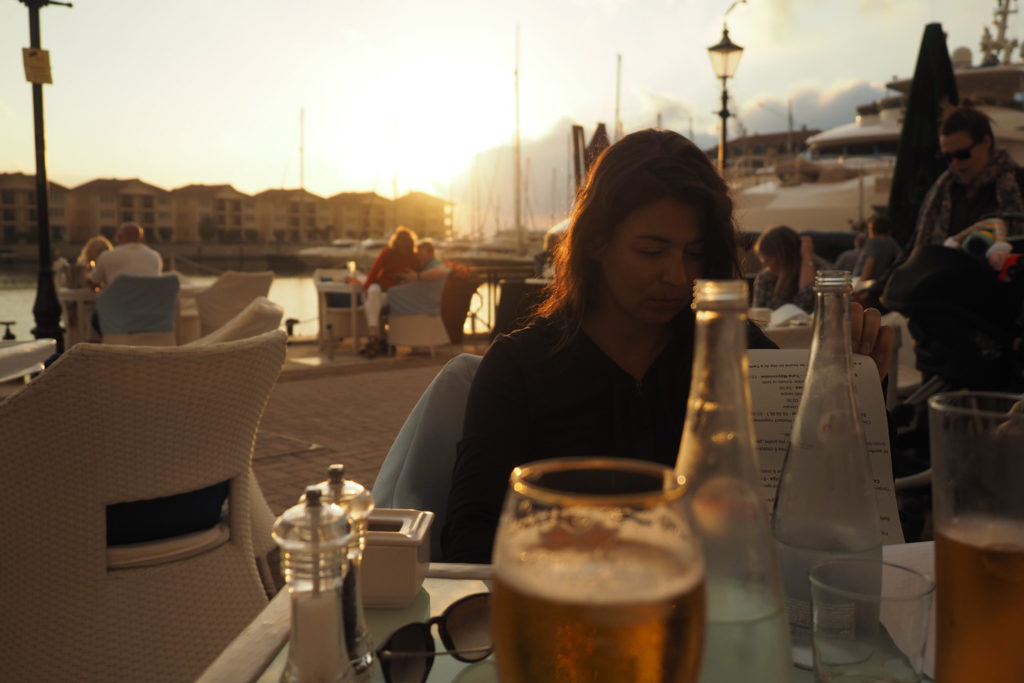 The next trip took us really into the Mediterranean Sea. So, with a slight delay of 11 months (compared to my initial, naive last year’s schedule) mala moja and i were there! The welcoming committee were: sharks. I did not believe my eyes. Nor did i want to believe them. But we had to. The water was perfectly calm and we could clearly see their dorsal fins as three of them appeared within 15 minutes. And they were all but small. There went my bathing ambitions… 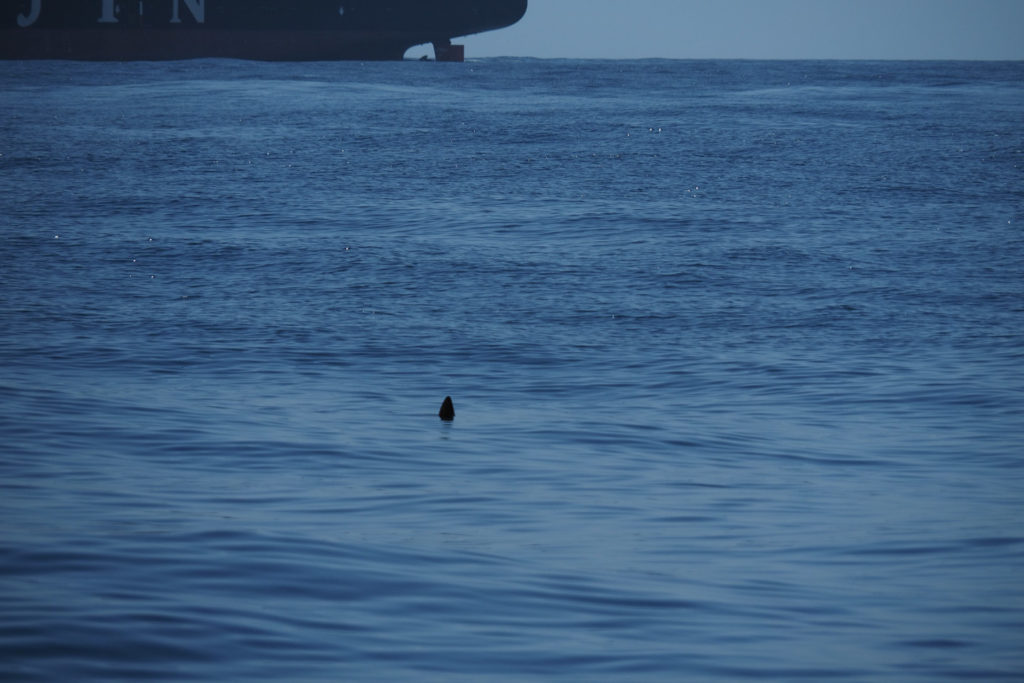 Shark swimming between boaty lying on the road just in front of the rock.

After celebrating Meli’s birthday in La Duquesa Marko had to leave us and went on to Paris for the weekend. Meli and i continued in a calm sail until Marbella where we spent another two days before she left today in the morning. So, this is actually my first day alone on mala moja and with no set schedule. In the meantime, it’s past midnight. I hear the music of a (not so) close-by club and the buzzing of mosquitos – and just helped an arriving Polish sailing crew to moor their boat. 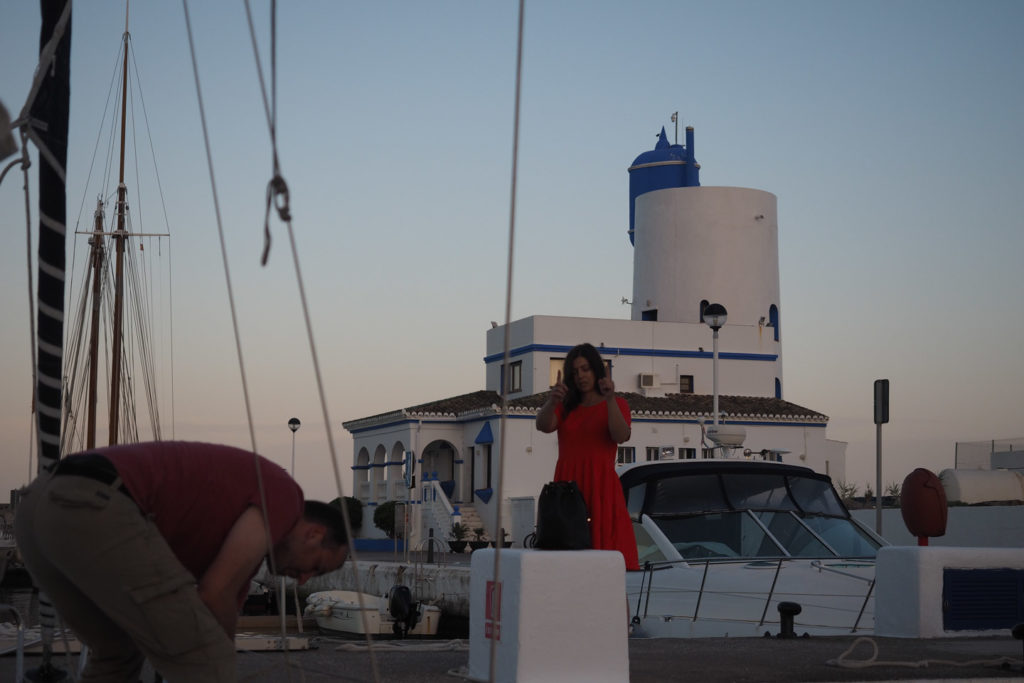 Getting ready to go for supper in La Duquesa

So nevertheless, here it is, the listing of past events. And i am sitting on top of it not knowing why i did take up last year’s trip on mala moja. Of course, there is this feeling to it, that i simply did not finish it. I wanted to summer sail. Wanted to hop from island to island. To hang loose. Enjoy the way instead of rushing towards a destination. But i realize that that is not a matter of where you are, but much more a state of mind. As i started to realize at the end of last year’s voyage, i do start to see again today.

If i do not adapt in my head, i will not become happy with this voyage. There is -again- a deadline for me, as i have to return to Austria for work and appointments by Mid of June. And then the next visitors are waiting to come to mala moja, which will again confront “my schedule” with an “external schedule”. Don’t get me wrong: it is great to have good company on board! But it is a difference whether you are on holidays (with a due-date and a certain starting and ending location) or whether you live (and work) on board and have less constraints. When on holidays we usually want to enjoy. Get food served in restaurants. Have a convenient life. But a boat is not about convenience. It is about simplicity. About reduction. It forces you to get slow (more on that in the next post).

I am curious how i will cope with all of this. Which harbor i will leave mala moja in for roughly a month (and where she’ll get her hatch repaired). And how i will get to there.

Time will tell.
So far i have reached the Mediterranean. Not got bitten by a shark. Not set mala moja aground. Have got a haircut in Spain (today). And am starting to settle into boat-life. Even though it will only last for roughly two more weeks (for a start).

Addition: just because i stumbled across, here is a great 40 tips for boat-maintenance. Seems like i intuitively (or naively planned) got a few things right. 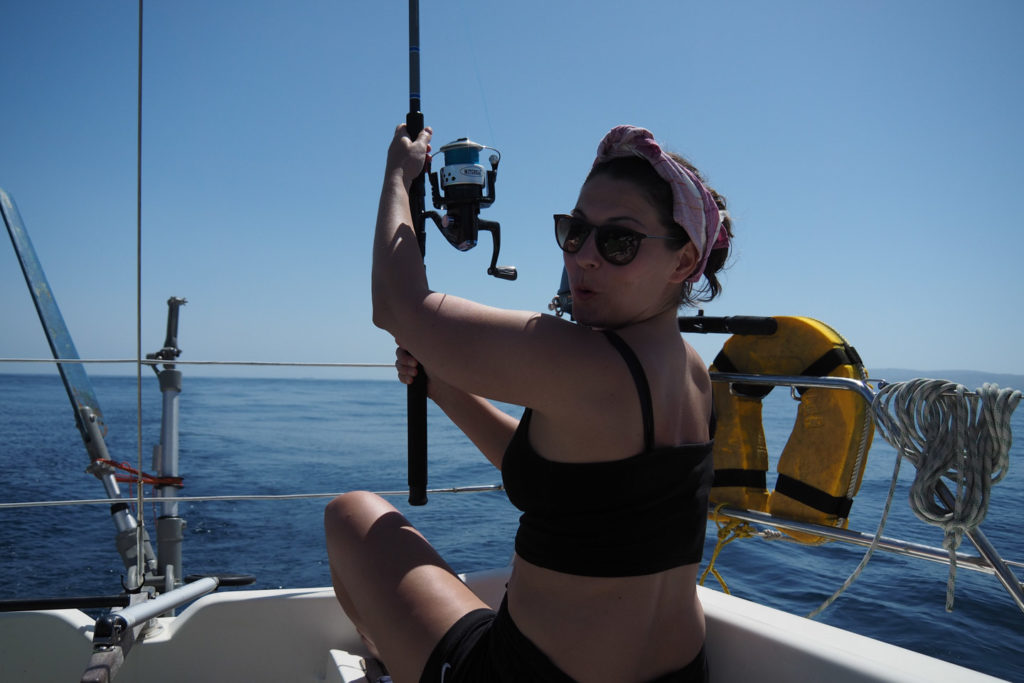 Trying to save money. Why do them tunas only jump around the boat and not bite onto the hook? 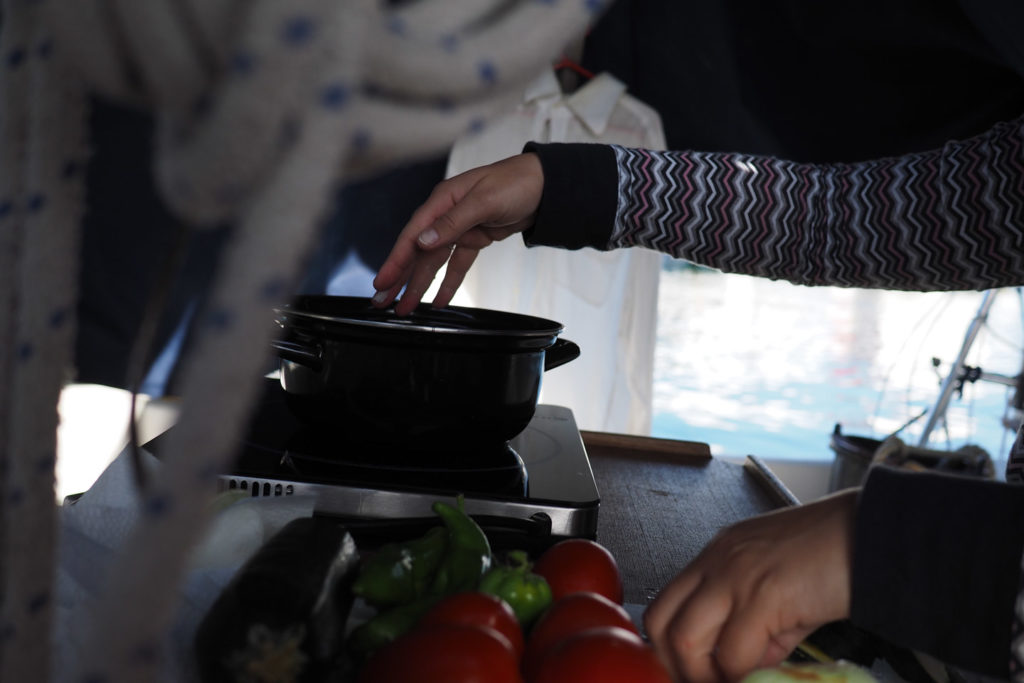 What i’ve learned from a french sailor: get an induction plate and you can cook outside (when connected to shore power = 230V)! 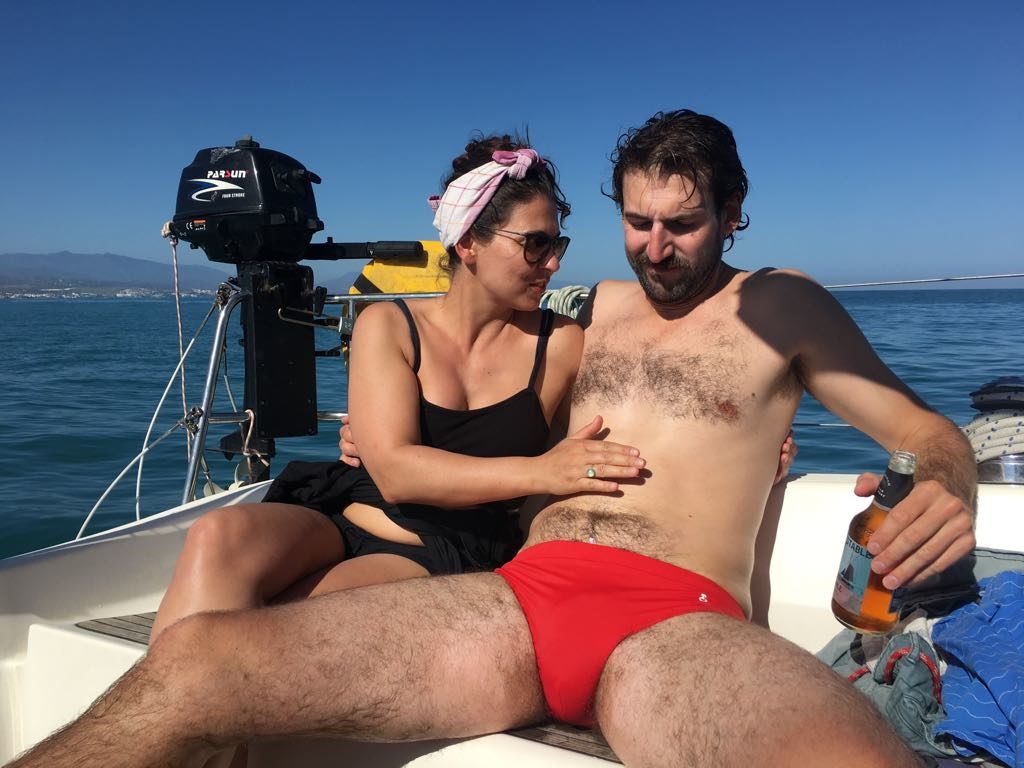 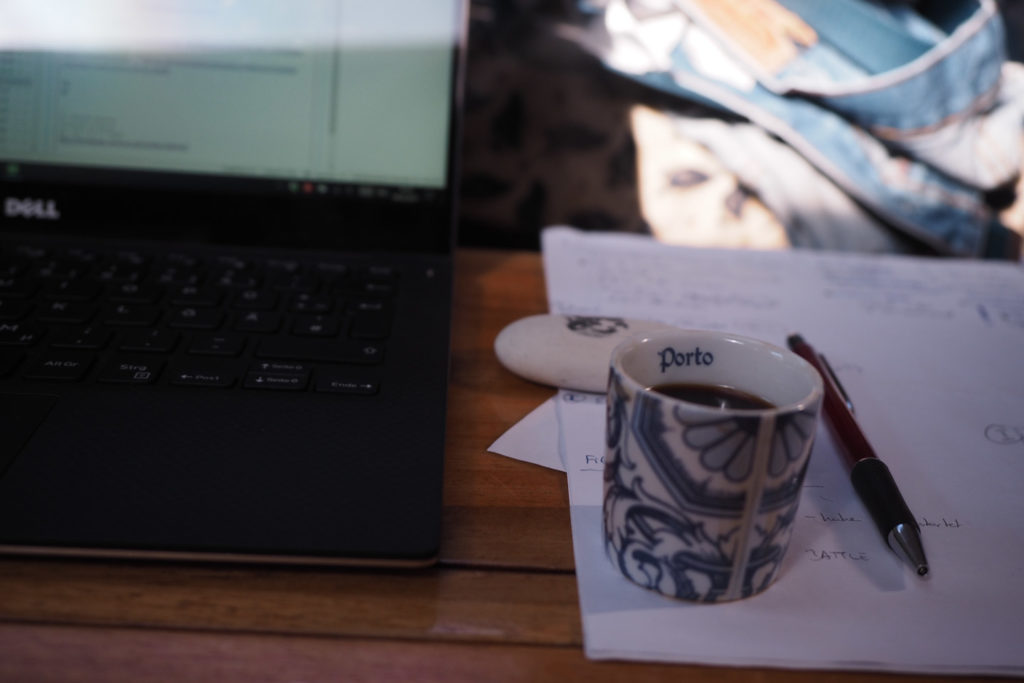 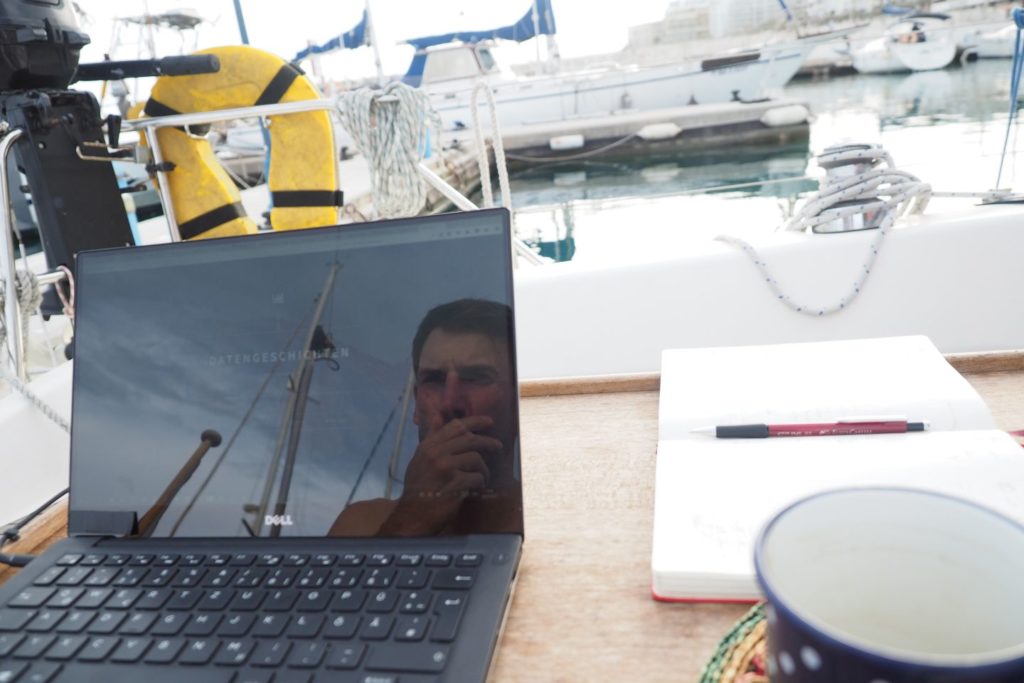 Working in the office without a roof… only possible if it’s dark, cause them laptop-screens are not bright enough. Yet. 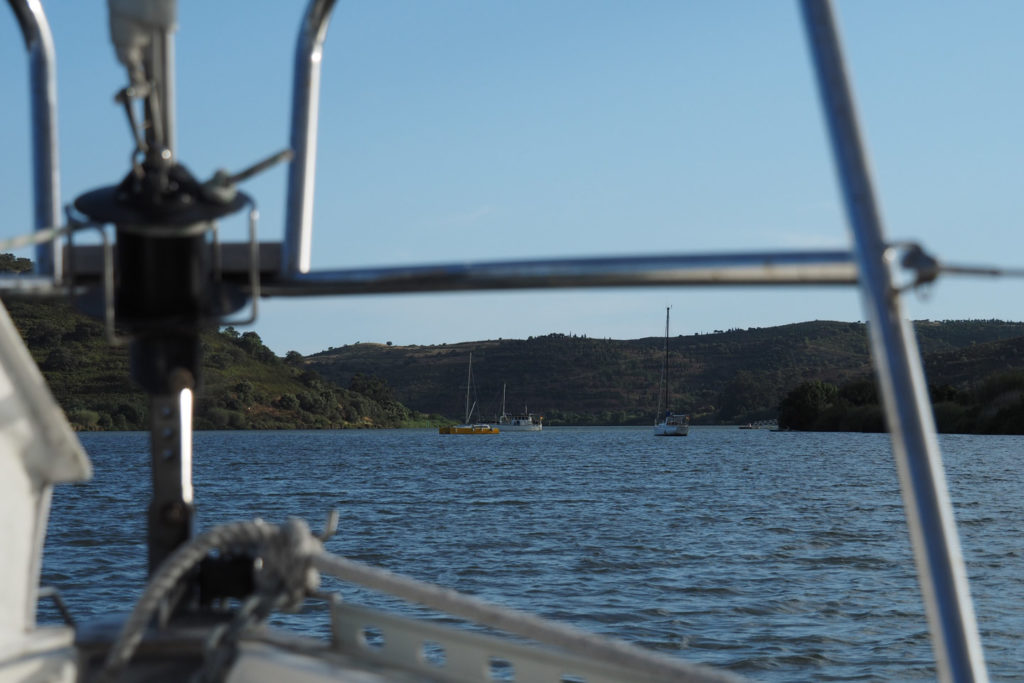