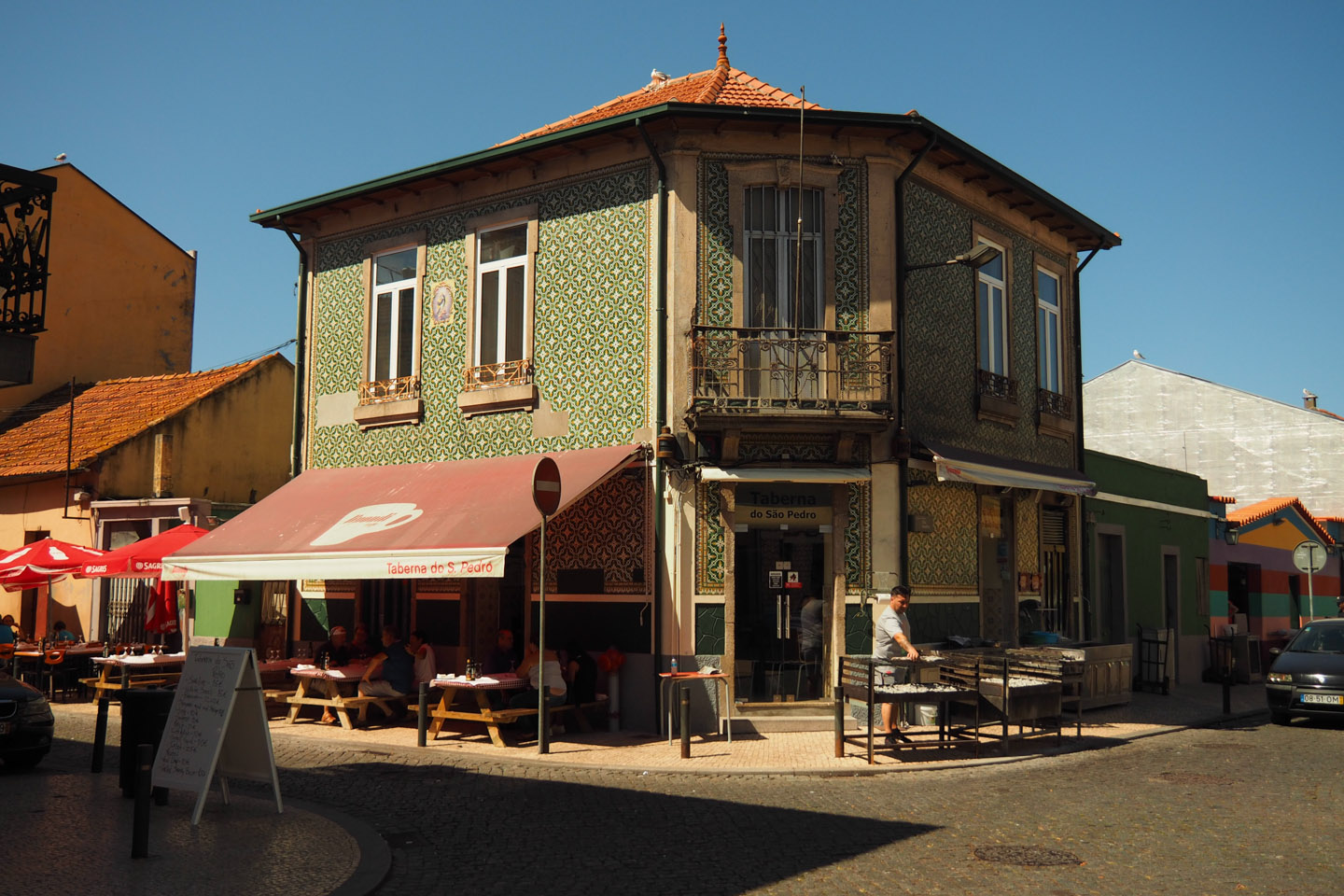 In A Coruña we moored just next to SY Emil who’s crew (Eva and Martin) welcomed us in España. In A Coruña we stayed for almost a week. I had some work to do, the city needed exploring, the Tapas bars a visit and the engine a check. I bought a new alternator, but that was money spent on learning the hard way. Apparently the alterantor is/was not the problem. And i still did not figure it out.
And the weather (and the skippers stomach 😉 ) threw us back once we tried to leave A Coruña. Apparently (way) too much Paella… rumor has it that there was a bit of partying involved too. 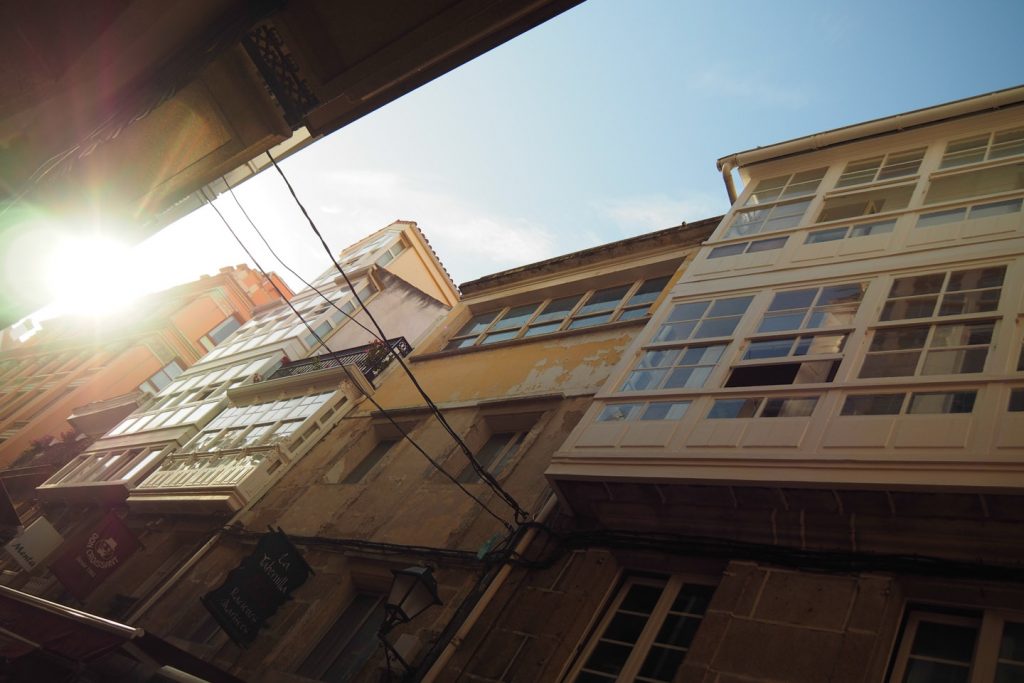 Street view from a Jamoneria in A Coruña’s city center

Kathi had the luxury of being temporally unconfied. And, to my pleasure, decided to stay a bit longer on board of mala moja. So we headed out to go around Cabo Finisterre, also known as Cabo muerte. Fortunatelly no humans died on the trip. Unfortunatelly the auto-pilot did. So we broke off the trip and headed for the first harbour (Camariñas) instead. We reached it just before midnight and were greated with such an intense and beautiful smell of pine tree when we entered the dark bay… it was wonderful. 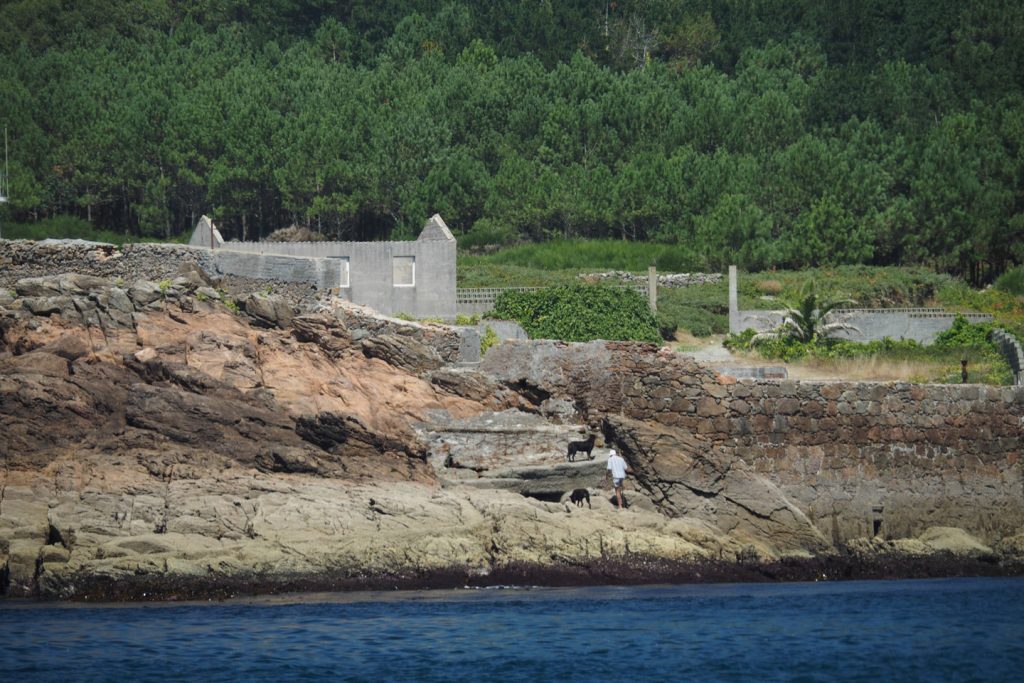 Without being able to fix the autopilot we continued south taking turns on the rudder. The next stop was Muros, where the autopilot could not be fixed either. From there we headed for Vigo, which has several authorised Raymarine-dealers. One of them ordered the complete pilot for me (urgent delivery) as spare parts for a repair were all but (economically) feasible to try to get a hold of. 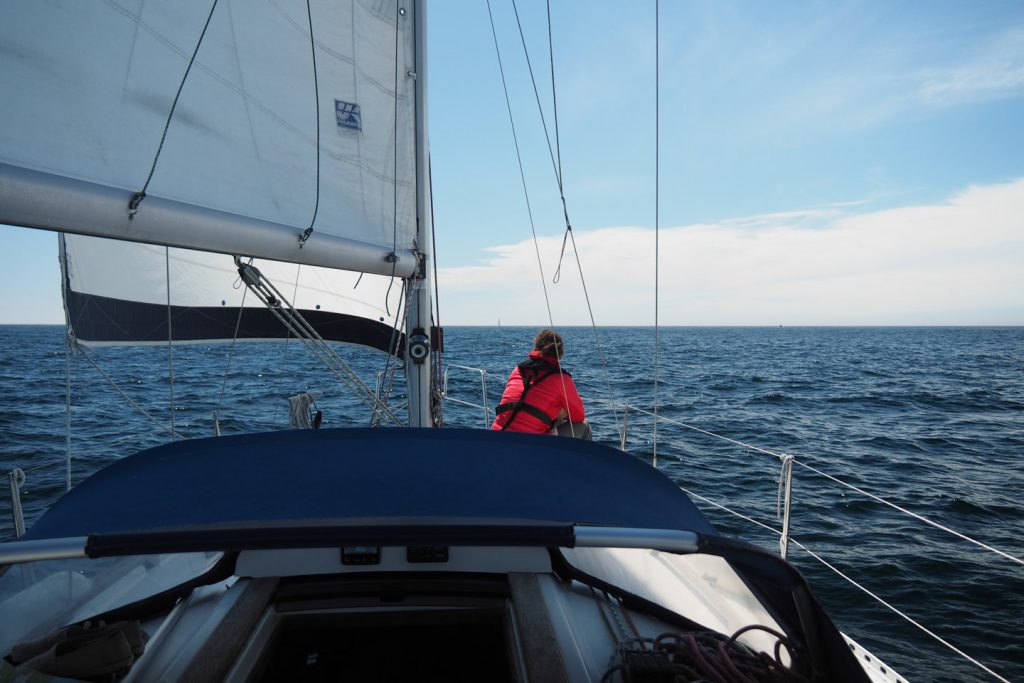 Kathi on mala moja on our way southwest… 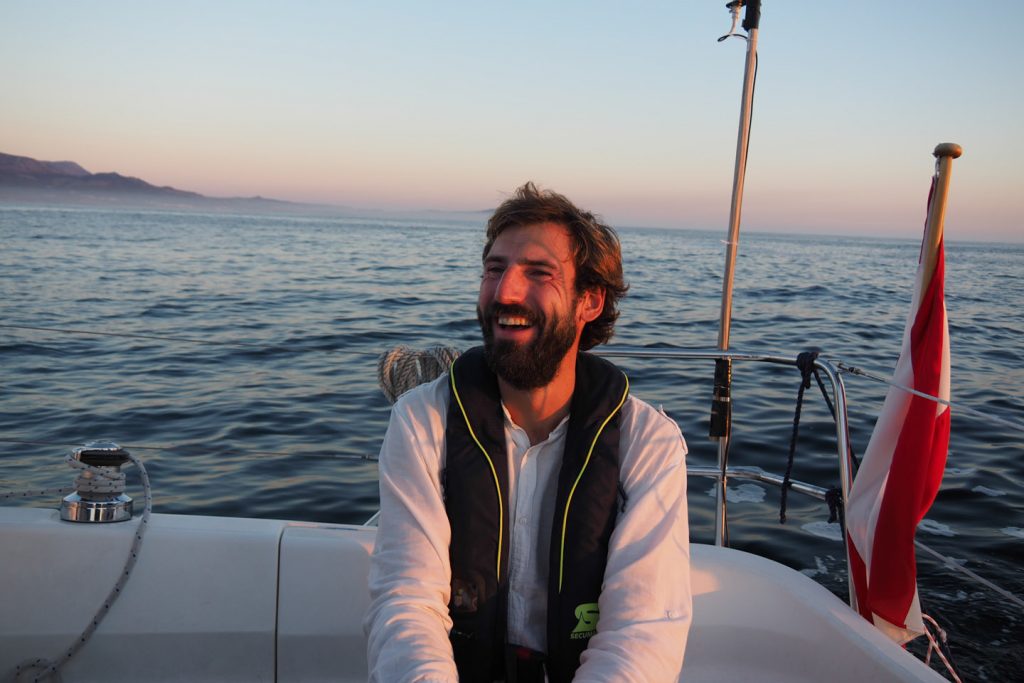 Sunset with a broken autopilot – but good spirits 😉 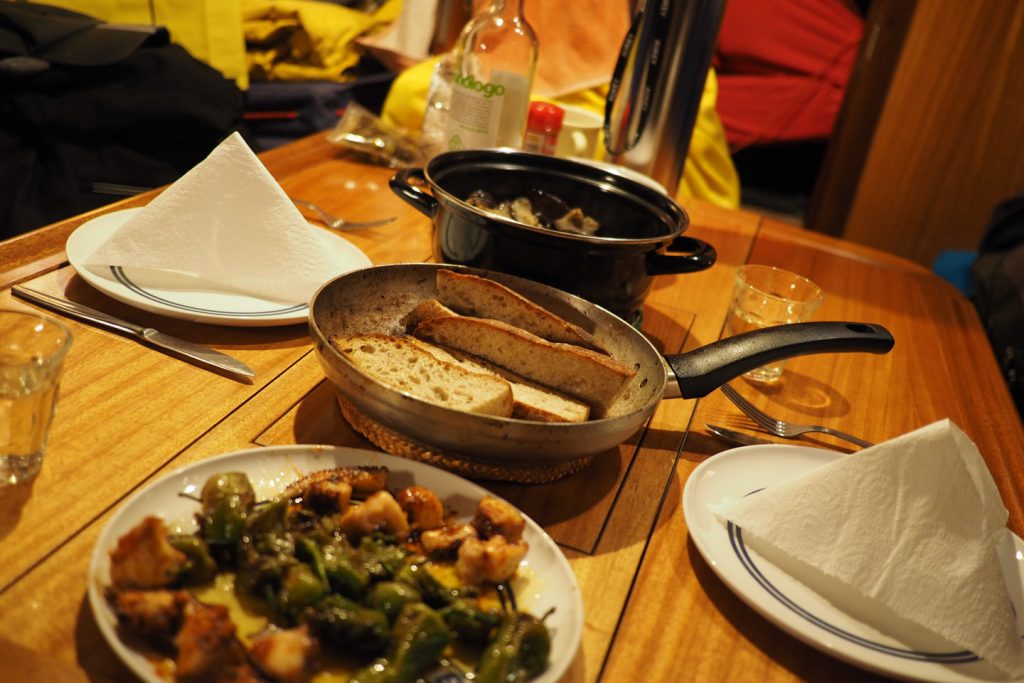 Home made tapas on board of mala moja – can’t be that hard to make them?! … thanks Kathi 😉

We stayed two nights in Cangas and waited for the delivery of the autopilot. I had office work to be done, Kathi used the time to explre and then we also had some wine and tapas to be tasted. Vigo we just wanted to visit briefly to pick up the autopilot. But i got mala moja in the wrong marina (they have 4 or more and my Vigo-map was lacking detail) and so we had to walk over an hour until we reached the city center itself. But we got a) to walk through the industrial harbor and b) the auto pilot! With that little precious we headed for Bayona where Eva and Martin from SY Emil were anchoring.

We reached them just before midnight and they were kind enough to let us go alongside, so we did not have the hassle of dropping the anchor at night. The next day we had breakfast together, i put in another office-day and at night we headed out for an overnight sail to Porto with SY Emil. 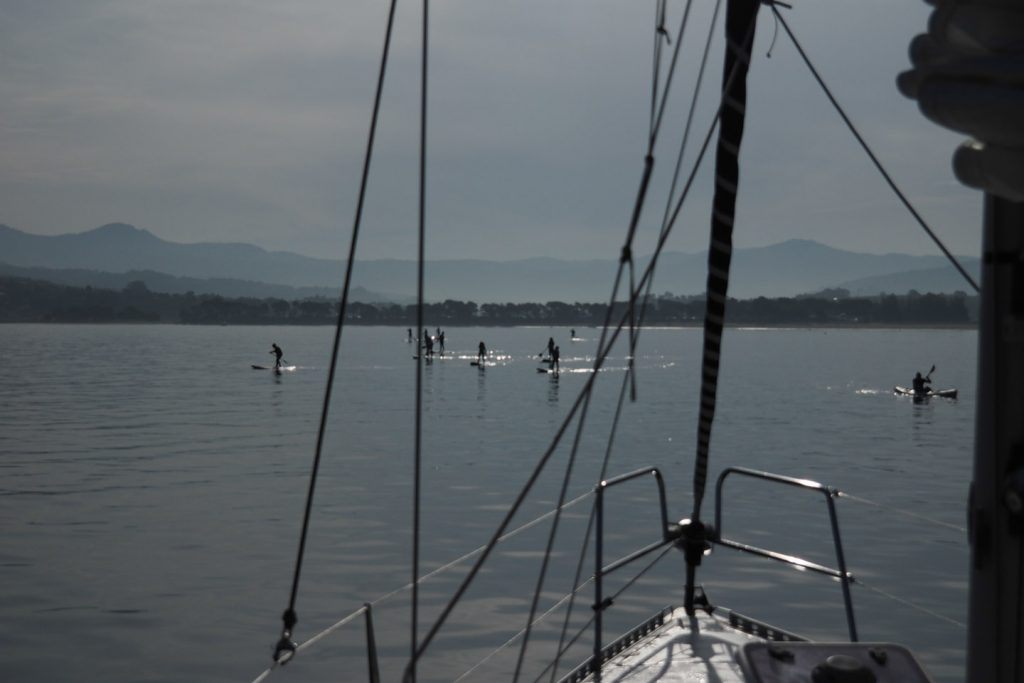 Morning at anchor – with stand-up paddlers swarming into the bay

Eva and Kathi both got sick with a twisted stomach (no, no parties this time!) and again we had strong fog on the trip. It was really good to have SY Emil with their radar in front of us. So we followed them to Porto with about half a mile distance through the foggy night – without physically seeing them. 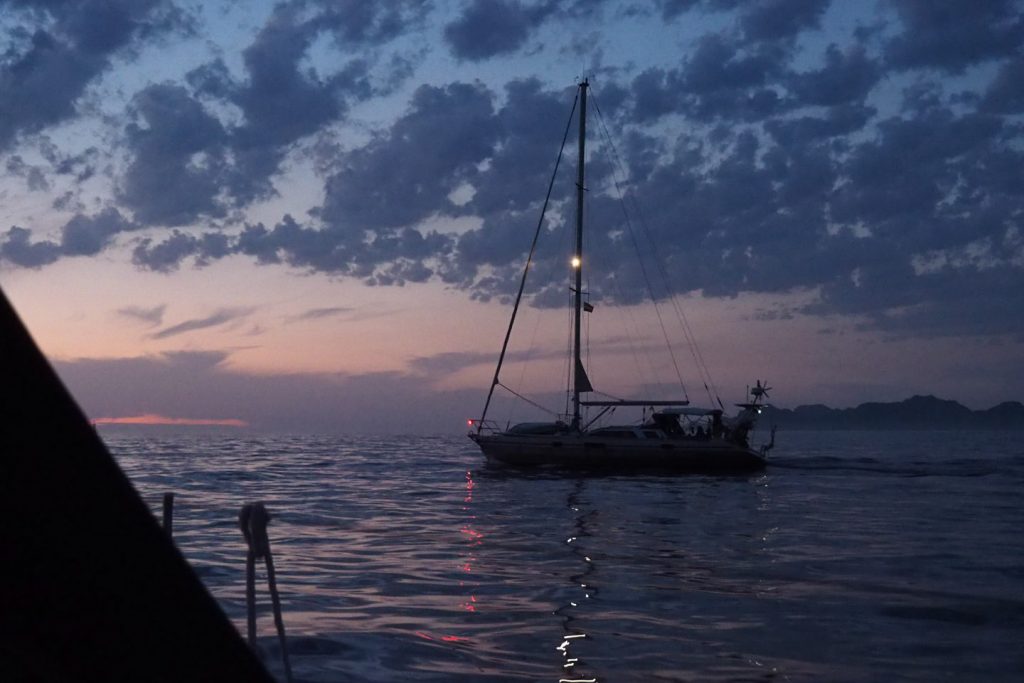 Sailing into the sunset and south with SY Emil

Around noon there it was. Laying before us was Porto! The first goal i wanted to reach. At the end of August instead the end of June – but well, one never knows when sailing 🙂
The city still is a marvel. But the Tawny Port did not really hit my taste as it did the last time i was there. To me it seemd, that it had gotten much more “liquory”. Maybe just a perception twist? Well, we needed to investigate that and did a thorough tasting. 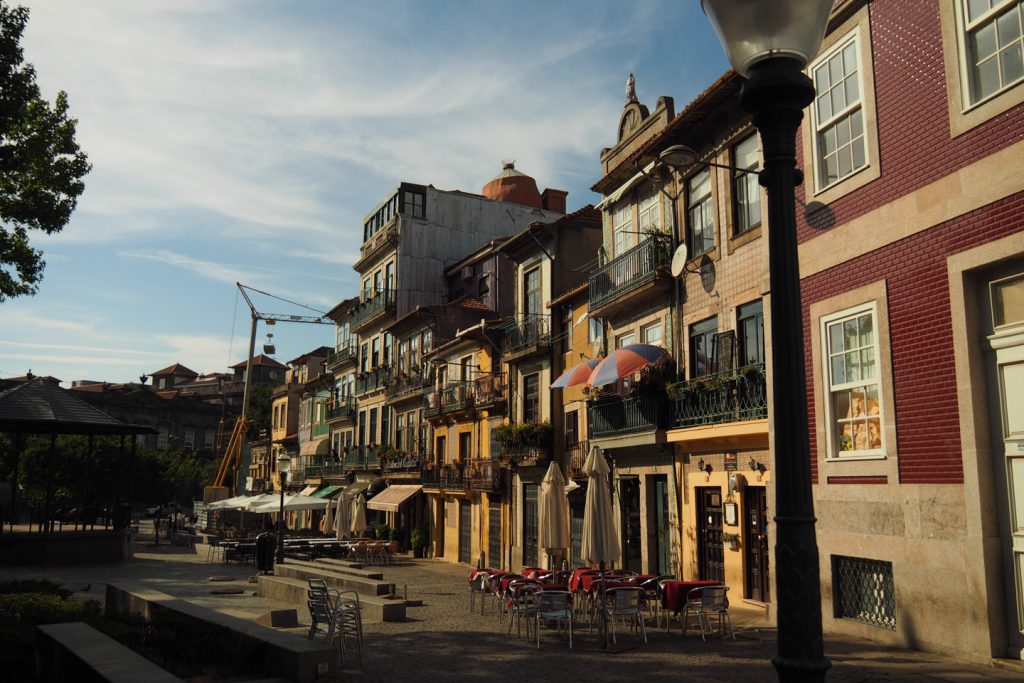 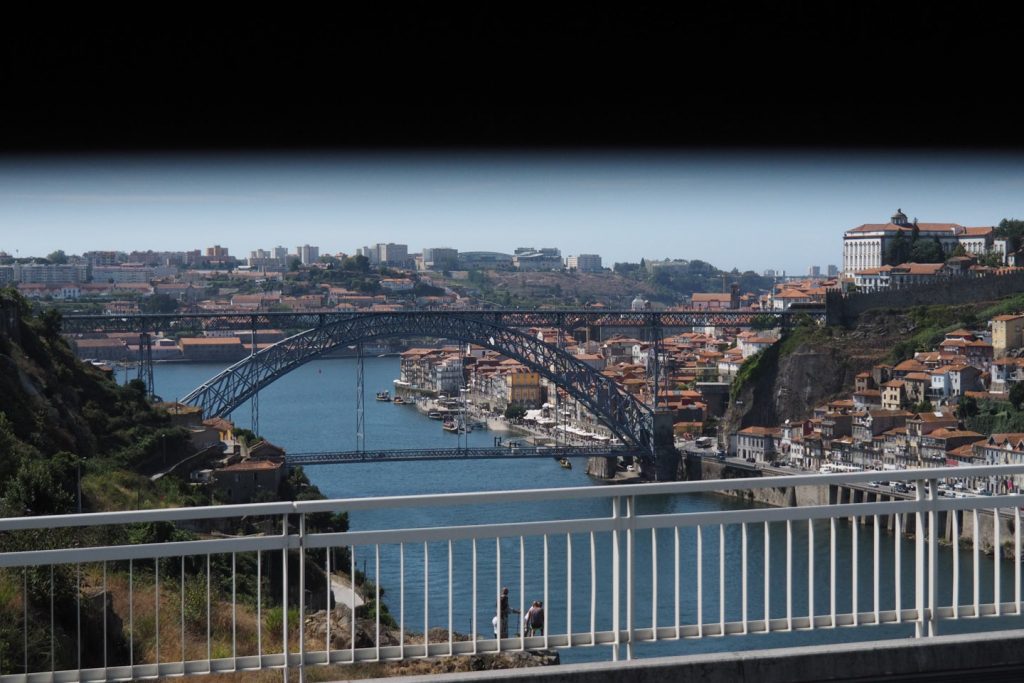 Slowly routine was building up. Kathi explored the surroundings, i had office work to take care of and the engine remained unsettled. But all good things have to come to an end. Kathi had to return home for a job interview and so it was just mala moja and me again. 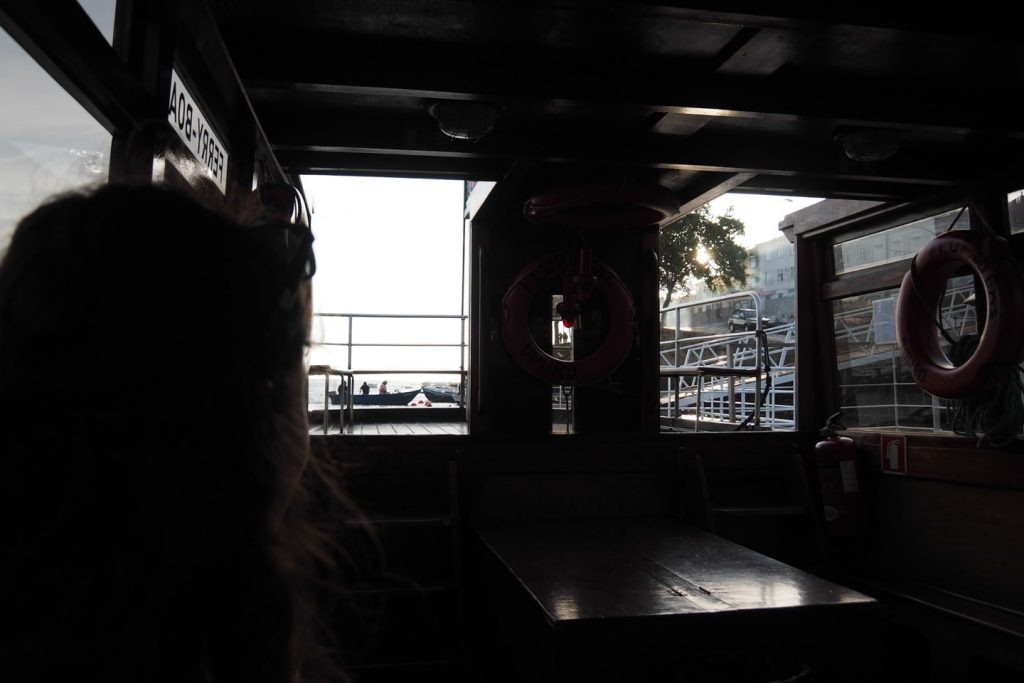 The next day Eva and Martin headed out for Lisboa with Emil and i followed – a few hours later – with Peniche in mind. Unfortunatelly the wind died off at night and so i had to turn on the engine. As this was the second time to have it running -after the brief starting phase- it meant to have it running all the way. But with the wind hiding somewhere there was no other option anyhow.

It was my first solo sail over night and i was hoping for more sleep. But the traffic was heavy. The fishing boats along the coast, several without AIS, did not let me go to sleep for more than 10 or 15 minute stretches. And in the second half of the night fog settled upon the sea. Not so funny.

With the fuel running low -and no desire to fill the tank with the 25 liter canister in the waves- i decided to make a stop in Figuera da Foz and wait for less fog. The fog did not go. So neither did i. Instead i was invited for supper on board of Ho’okipa, a katamaran sailed by a russian couple who we first met in A Coruña.

Yersterday the forecast said that the fog will go away and thus i headed south when it started to get thinner. But it came back. Under engine (too little wind again) i chuged south, reading Bukowksi (recommended to me by Kathi). Dolphins cheered me up. A fishing vessel that came out of the fog just some 100-200 meters away frightened me. It did not have active AIS. And had it come not from behind but approaching from front there would have been quite little time to react. So i started to really look forward to reach harbour. I did so at shortly past 2200. Despite the wind blowing with gusts of 15 knots the fog persisted. Spooky to go around a cape with the lighthouse invisible and hence just the fog signal crying.

Close encounter in the fog – the ship had no active AIS.

Inside the harbour the wind still blew with gusts of 15 knots. The “marina” in Peniche is tiny. In this conditions maneuvering is all but funny – and definitely not easy for me. Add more than poor visibility and no free berth. I was extremely glad when i saw a guy moving aboard a moored vessel. So i shouted if i could come alongside, he helped me to tie mala moja to his boat and after a glass of Port i went to bed with my second (Factotum) book of Bukowski (i finished my first -Post Office- along the way).

So here i am. In Peniche. In earyl post-season and in the fog.
By the beginning of September i saw myself somewhere in the Adriatic or in Greece, cruising between picturesque bays. But that was 5 months ago. And several hundred miles of experience.
By now i do have a return date (Sept. 22nd) and subsequently my time aboard mala moja is less than three weeks. My icehockey team’s season is starting this weekend in Vienna. Without me.
Mala moja and i will not reach the Mediterranean. 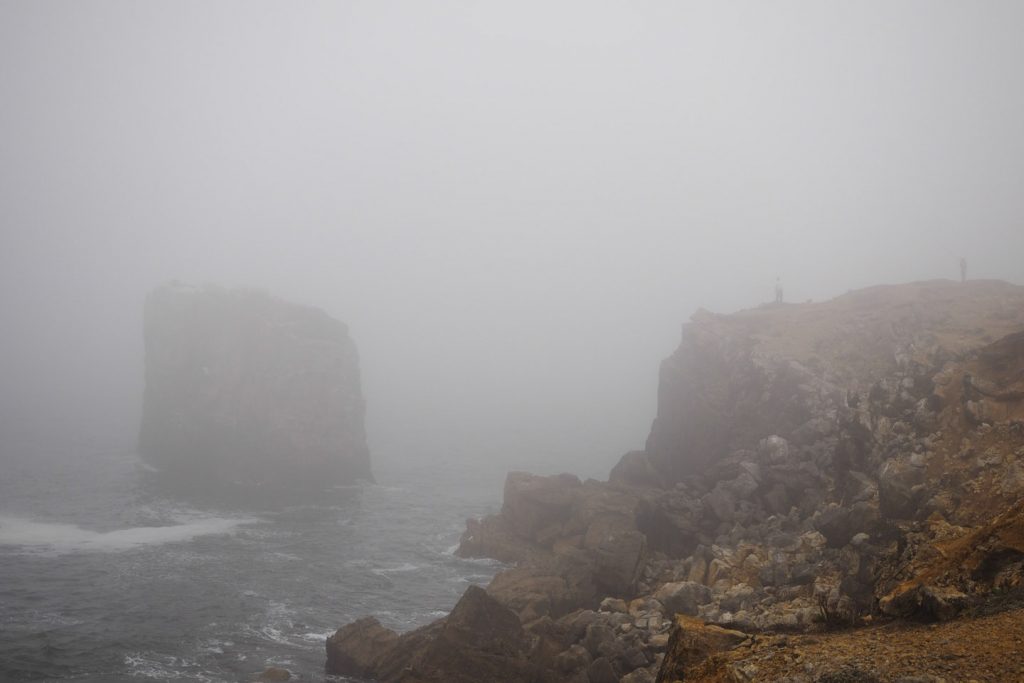 People fishing in the fog on the cliffs of Peniche

I have a few more days left and quite some stuff to do. Meeting “the Emils” in Lisboa before they head for the Carribean is a must, office work does not stop, and then it is sailing further down south towards the Algarve where i want to find a place for mala moja to stay there over winter.
Mala moja and i will not reach the Mediterranean; this year…