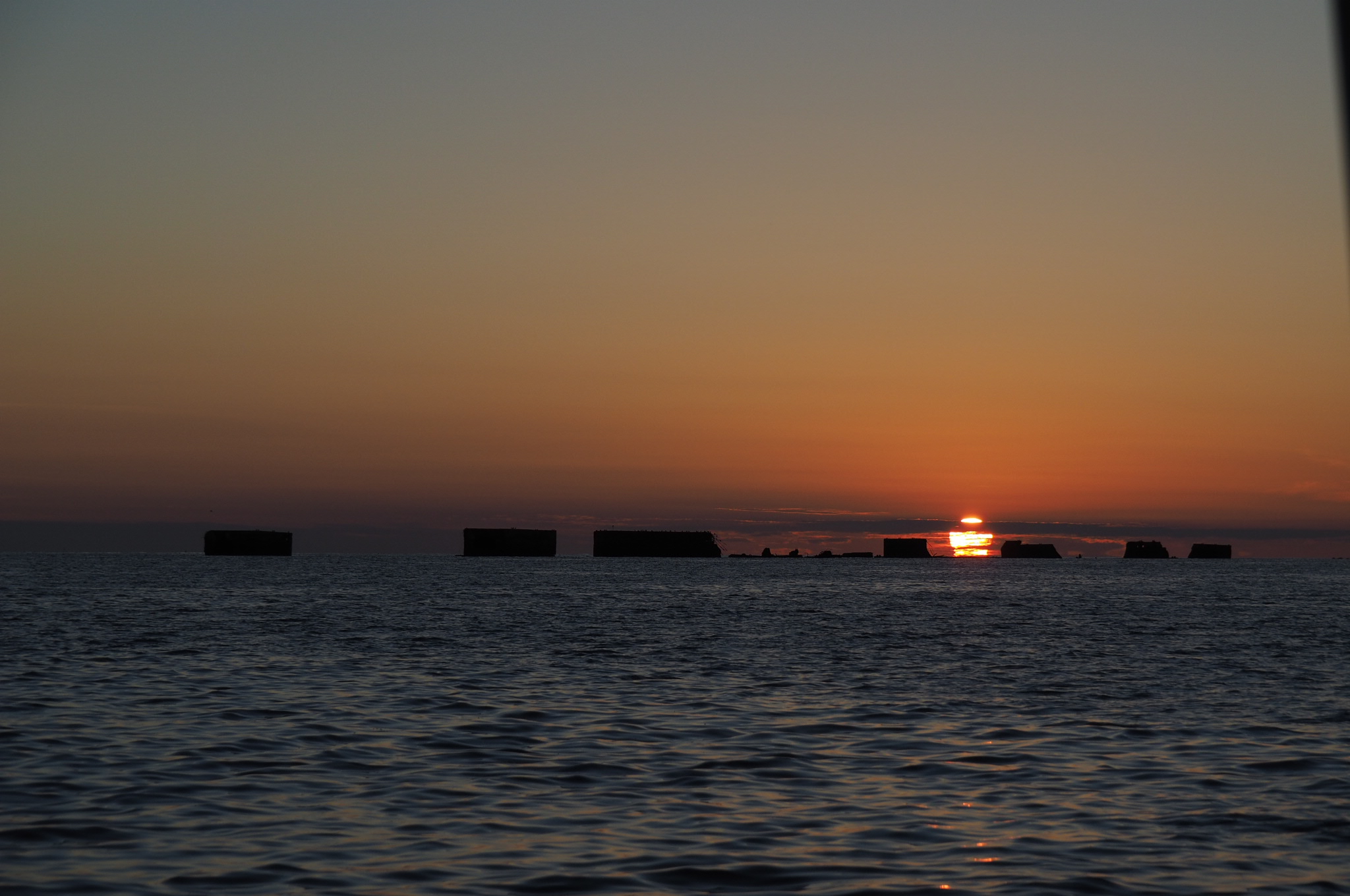 Mala moja is slowly sailing towards Saint-Vaast-la-Hougue from the Mulberry harbour off Arromanches, where we anchored the night. Yesterday was simply perfect. It started with a sunny day in Ouistreham, where i spent only one night after leaving Le Havre, which kept me for much longer than intended… But i would not want to miss the time there 🙂

The first memorable event was the game of football i “watched”. My two british neighbours (a scottish and an irish sailor) invited me to listen to the game on their boat with a very british “even though we’re leaving the Union, we can still be friends?!”. To enjouy the game with them sounded fun. Although i offered to bring my computer so we can watch it – which they gladly accepted.

With the kick-off i had to realize, that the french streaming-provider was showing the game to paying users only… bad luck. Our fallback to listen to the game as intended was unfortunately impossible either. I had imagined them to crank up the radio, but they had an ipad where they wanted to listen to BBC – which was blocked outside of the UK. After 10min of searching the web i found a US site which was streaming the BBC’s commentary for free… so we eventually got to listen how France beat Germany (much to my dismay).

But over having supper, a bit of wine and then a bit of rum, the game mutated more and more to being background noise, while we chatted. Turned out one of them had been a sailor in the Royal Navy and left it as they stopped dispensing the daily ration of rum in the beginning of the 70ies -or so he told. He then went on to live in a hippie commune, smoking the finest weed which he got from a police officer, before he relocated to California for surfing and listening to the Beach Boys. His companion was much quieter and “put up with him only because he is such a good cook”.

After a while the hippie got out his guitar and i my harmonicas and we jammed for a few hours until the second one went to sleep. We then transferred onto mala moja where we had more rum until early in the morning. Naturally the next day was not a day where i was willing to go solo-sailing…

But due to staying in harbour i got to know my other neighbours. Eva (German) and Martin (Swiss), both younger than me, who are preparing their boat Emil for a one-year trip to the carribean and back. It was great to finally meet people my age who are sailing, but they are really cool besides being “my age”…

They invited me for dinner to which a few of their french friends came, who are “homeless, but not boatless”, as they put it thmeselves, living on boats in the marina of Le Havre.

The plumber i mentioned in the last post sold me 16mm diameter pipe and i needed 15mm, so i had to keep on looking for a pipe that fit. Besides that I spent my days in Le Havre exploring, doing a bit of excercise (running), going to the beach, working (video-conferencing and mailing). On the Bastille-day Martin and i went for a short sail in really beautiful conditions (sun and a moderate to fresh breeze). And of course in the evening we went to the city’s official celebration at the beach promenade. But, having had an (extensively) prolongued supper the night before, we were sooo tired that we went home before the fireworks. So i watched those and fell asleep just afterwards.

Thanks to being in bed early i was in good condition to continue my trip – after a week spent in Le Havre. After getting groceries, the spokes of my new bike adjusted and a great lunch in the city i left port towards Ouistreham. On the way i crossed from the eastern into the western hemisphere, sailing over the zero meridian of Greenwich. I reached berth just before midnight – due to my late departure and the lock-operation schedule which pinned me down for over an hour. Despite a very poor first impression that i got from the city, it turned out to be really beautyful the next day.

Yesterday i quickly got out of the tidal lock and moored mala moja just outside of it in the waiting area to go for fresh bread and groceries… and saw the beautiful inner city.
Great!
The weather, a perfectly warm summer day, added to the impression. The whole situation inspired me to buy an artichoke and a small bottle of Champagne.

I set sails westward. With no set destination. The wind, with just around 10-12knots came from roughly 60° starboard at first and then veered slightly onto 90°. The sun was shining, it was warm and mala moja flew with 7,5 to 8 knots accross the water. It was beautifully perfect. After a few hours of sailing the wind started decreasing. I was trawling a mackerel bait all the time. So i don’t know if it was the decrease of speed down to just above 5kn or pure chance, but suddenly there it was: the first fish i cought sailing! A mackerel of moderate size. Good enough for supper for one. The artichoke started to make perfect sense. Now i was faced with the problem what to do with a freshly cought fish?! Does it need special treatment? How to store it until supper? After a short video conference with my family – i called to ask about cleaning the fish, they wanted to see the catch – i cleaned the fish and put it into the fridge.

Next i needed a place to stay. And although i was a bit anxious, i decided not to go into port, but to anchor in the Mulberry harbour. The last piece of the way i had to use the engine as the wind died off completely. Entering the remains of the harbour i asked an anchoring, local sailing boat where there was a spot with sufficient water during low tide and dropped mala moja’s anchor for the first time. With the boat being as light as it is, it took quite a time until she was half-decently alinged with the wind. So i put her into reverse… and the anchor dug in and held rock solid.

Despite no significant waves and because of practically no wind, the boat did not turn into the wind but was adrift and mostly got the waves from the side, rocking up to 30°. So making supper was a rolly thing, but it turned out perfect. The artichoke was almost better than the fish 🙂

But it was all topped by watching the sunset – for which i opened the bottle of Campagne. A perfect day coming to an end.

Sunrise and morning loo coincided so i got to see that too. And it was totally worth it again. After a long sleep in, gently rocked by the waves, i got up for a swim in the channel. I used it to test my new diving glasses and check mala moja’s belly for fouling. There is a bit on it, but not much. Though i try to clean it after reading up on how this is best done without damaging the anti-fouling.

After that, and breakfast, i lifted the anchor and set sails again towards the west. The goal might be Saint-Vaast-la-Hougue. Or another anchorage at the Iles Saint Marcouf. We will see…

Note 1: Unfortunatelly my internet-connection is currently too bad for more pictures. Plus: i lost several of my (favourite) pictures due to technical issues (that hurts). I’ll try to upload more images as soon as possible…

(Cover image: Sunrise viewed from the Mulberry harbour off Arromanches.)