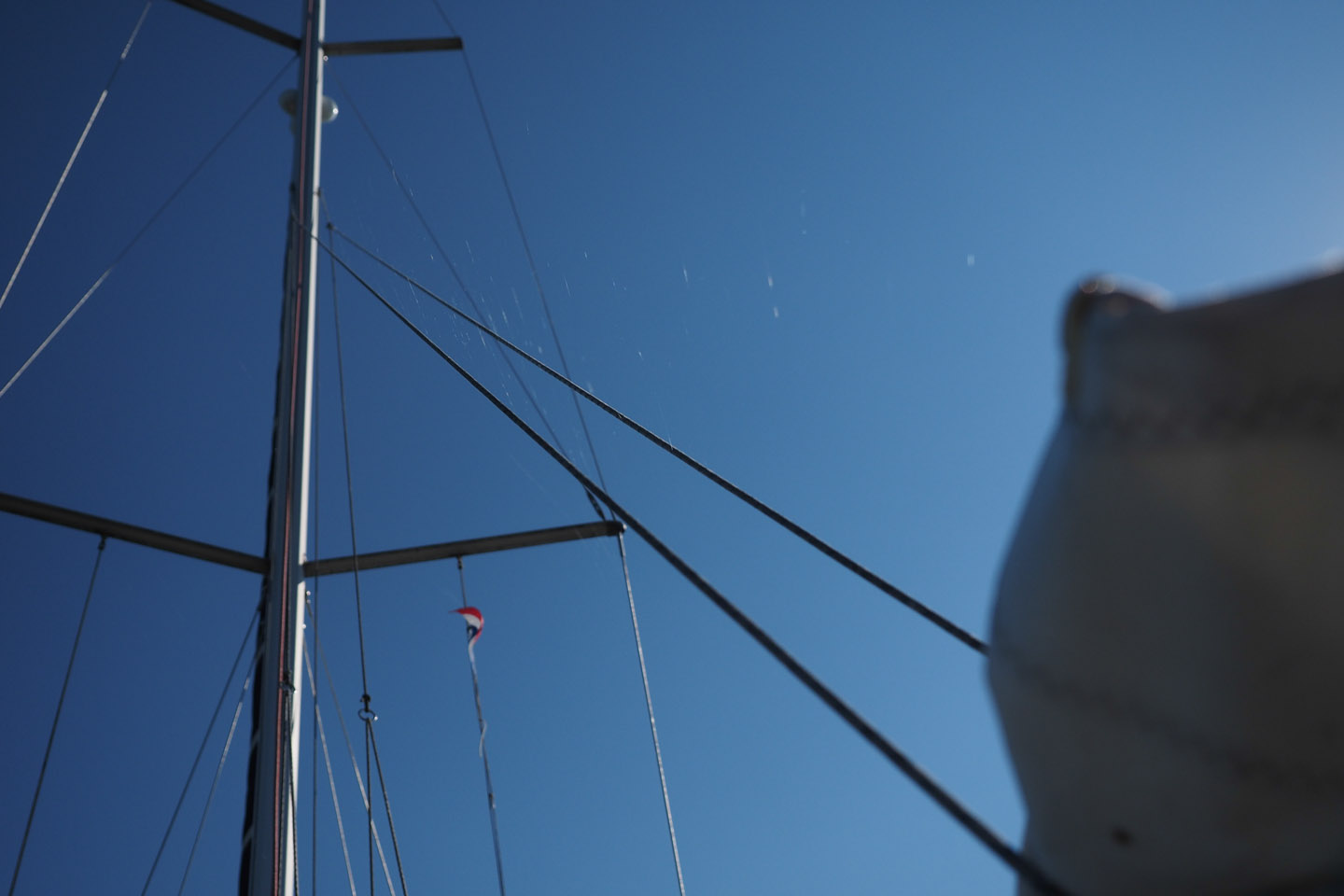 Time flies by. The last days have been even fuller of things than before. I’ve had a few (video)conferences for work and have been visited by my family after that who were leaving a day after Ulli and Walter, two old friends of mine, came for five days. Needless to say that life on 6 square meters is turned upside down when two additional people squeeze in 😉
But the weather was great and so the times was too. A really pleasant change from my “routine”.

It would be a bit long-winded to recount all that happened in the last two weeks. But here are a few hightlight of the visits… 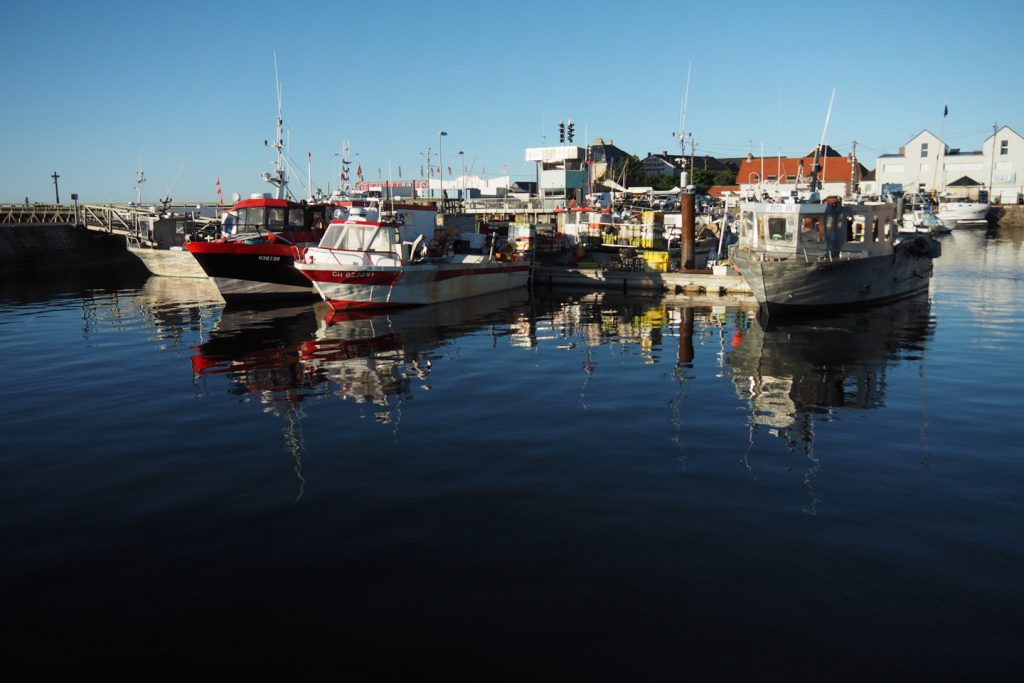 Fishing boats in the harbor of Grandcamp-Maisy 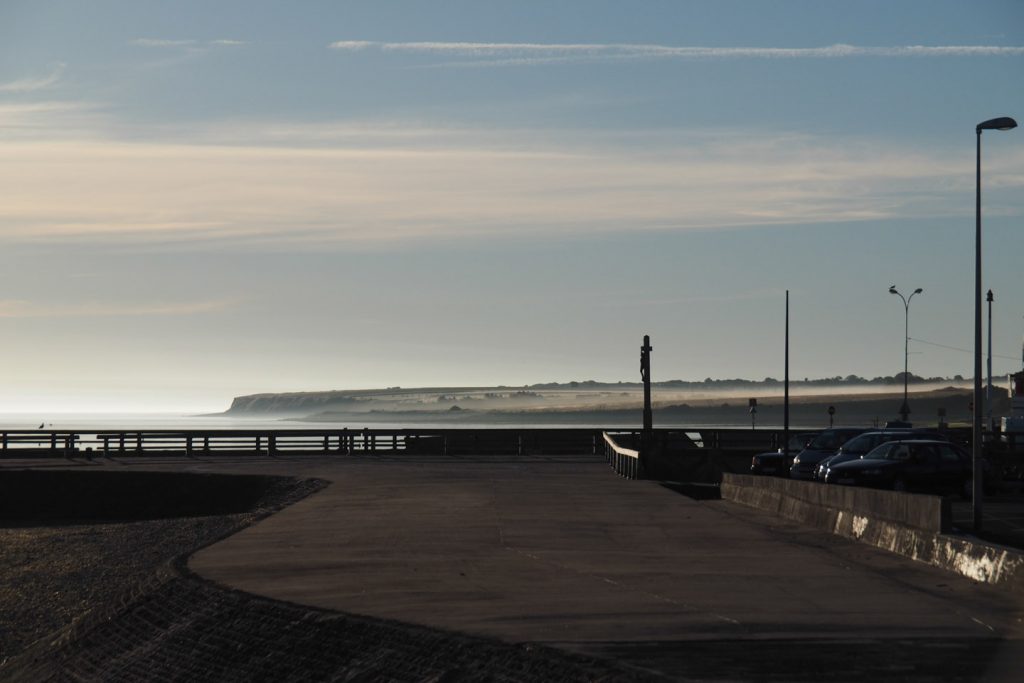 Morning fog creeping up towards Grandcamp-Maisy

For my video-conferences i needed reasonably fast interenet-access, which is not as easy to obtain as one might think. Despite having a SIM-card with tons of download volume, the coverage was unsufficient. So i found myself checking out all bars around the port of Grandcamp-Maisy in search for a good WiFi – without succes. Subsequently i had to do a quick harbor relocation (to Carentan) to get there within the same high-tide and prior to the conf. For my early-morning sail i was rewarded with a bunch of seals escorting me in the estuary of the Carentan river. 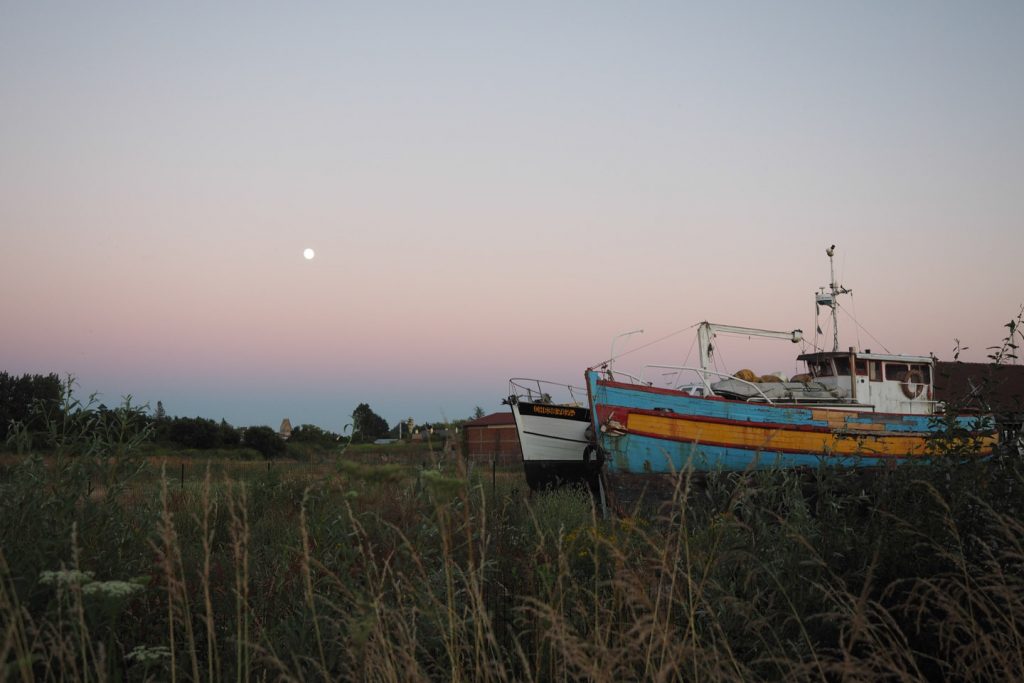 Fishing boats in the weeds in Carentan

The next stop from there was St.Vaast – a picturesque fishing village. A plain beauty. It was great to see how they farm oysters there. The really farm them. On fields accessible at low tide which are then entered with with tractors and harvested. Needless to say that i had to try some -and good they were! 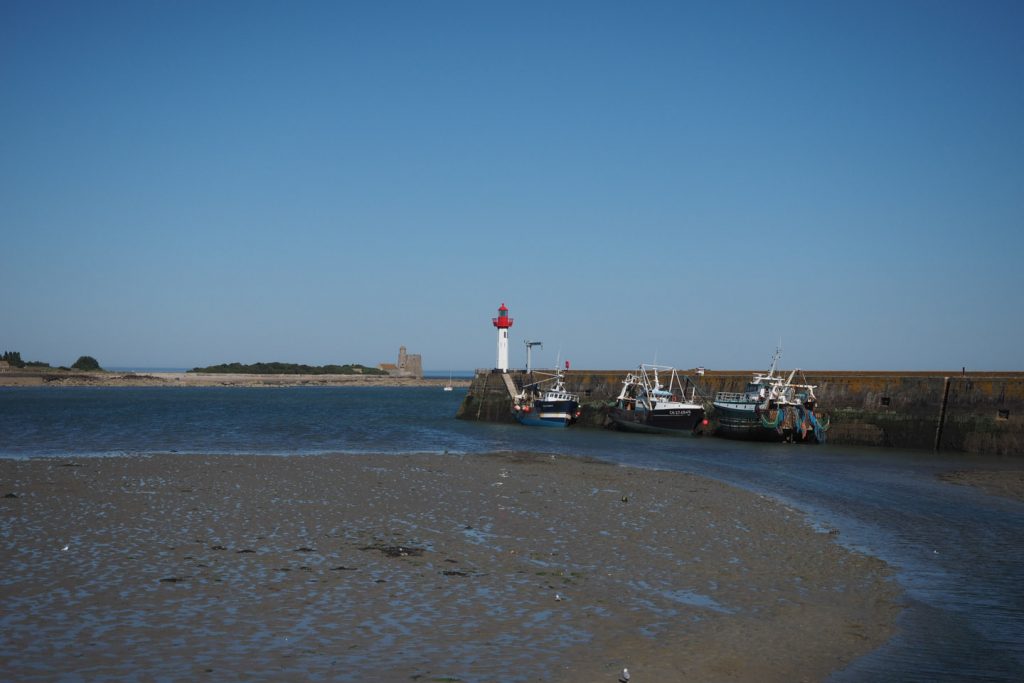 St.Vaast’s harbor entrance at low tide (the harbor is closed with a lock) 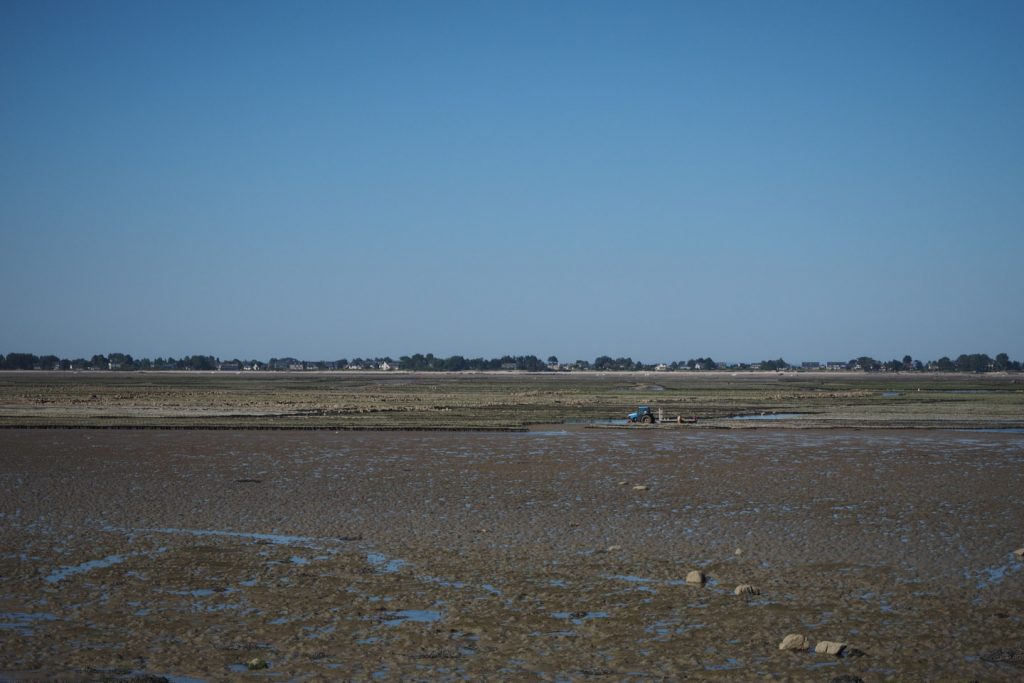 Oyster fields in St.Vaast being harvested with a tractor 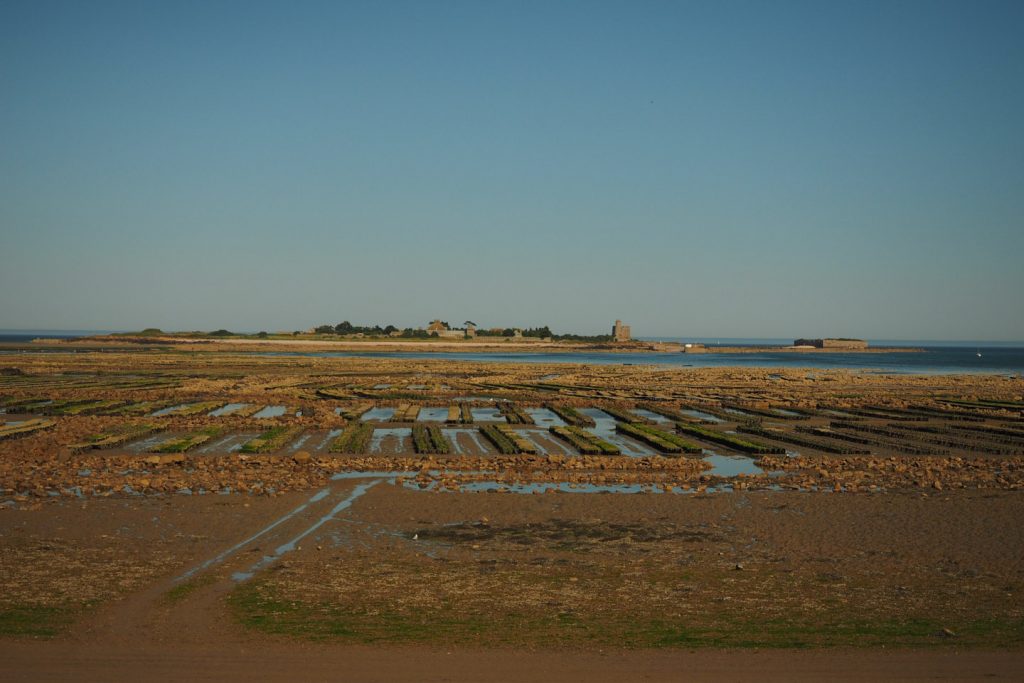 From St.Vaast i sailed to Cherbourg in order to meet my family. It was a pleasant surprise that just before the departure i found out that SY Emil was anchoring just outside the harbor of St.Vaast in which i was staying. On the VHF we agreed to meet and sail to Cherbourg together. For me that trip was a great experience. Since i wanted to avoid the Barfleur cap (it is recommended to do so as the currents tend to get really nasty there) i made a big circle around it – and was at the northern most point of it revarded with a glimpse into what ocean sailing might be like. Close to the middle of the channel the tidal stream is weaker and thus its effect on the waves too. So i was there with a gentle wind of 15 knots calmly sailing on the “breath” of the Atlantic – a mild swell of long-spaced 1 to 2 meter waves lifting the boat up and down. It was beautyful. I had this feeling of just keeping going straight and not tacking for Cherbourg…

From Cherbourgh my brothers Marko and Joško sailed with me – the infamous Race of Alderney. With a perfect timing and calm winds it was more of a Sunday-sail, despite having “chosen” the day of spring tide. It was just amazing to see us race through there and having a 60° difference between our course steered and the course over ground to reach Diélette. We even cought a mackerel. But threw it in the sea again after discovering that this just had happened off the “nucular peninsula” between the nucular (see link before) fuel reprocessing plant “Le Hague” and the nucular (see link 😉 ) power plant Flamanville. 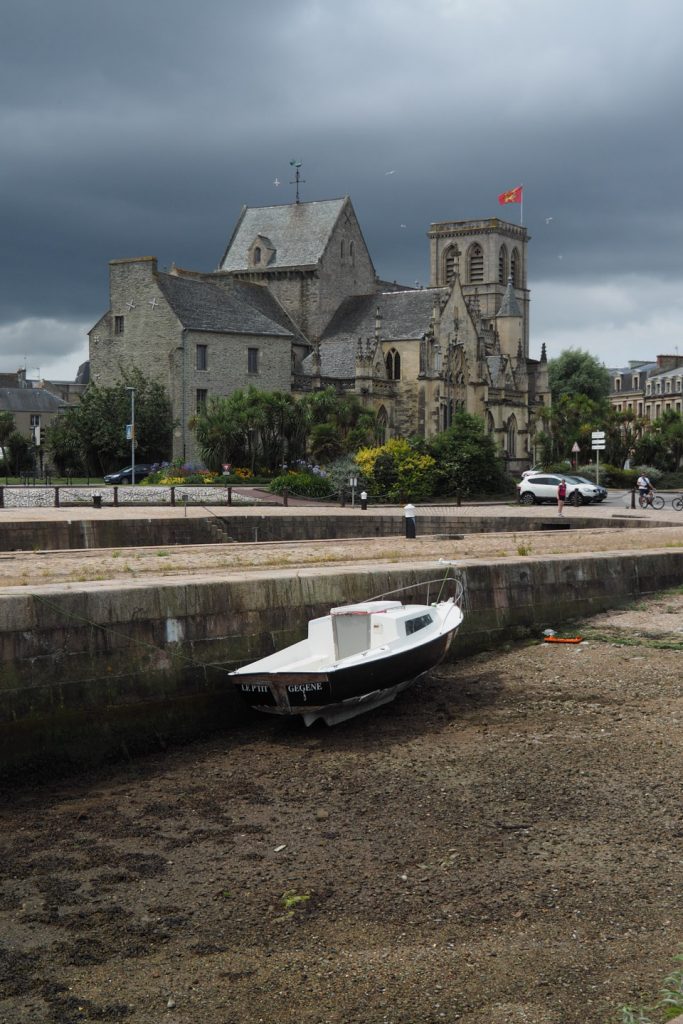 Church in Cherbourg with a boat fallen dry 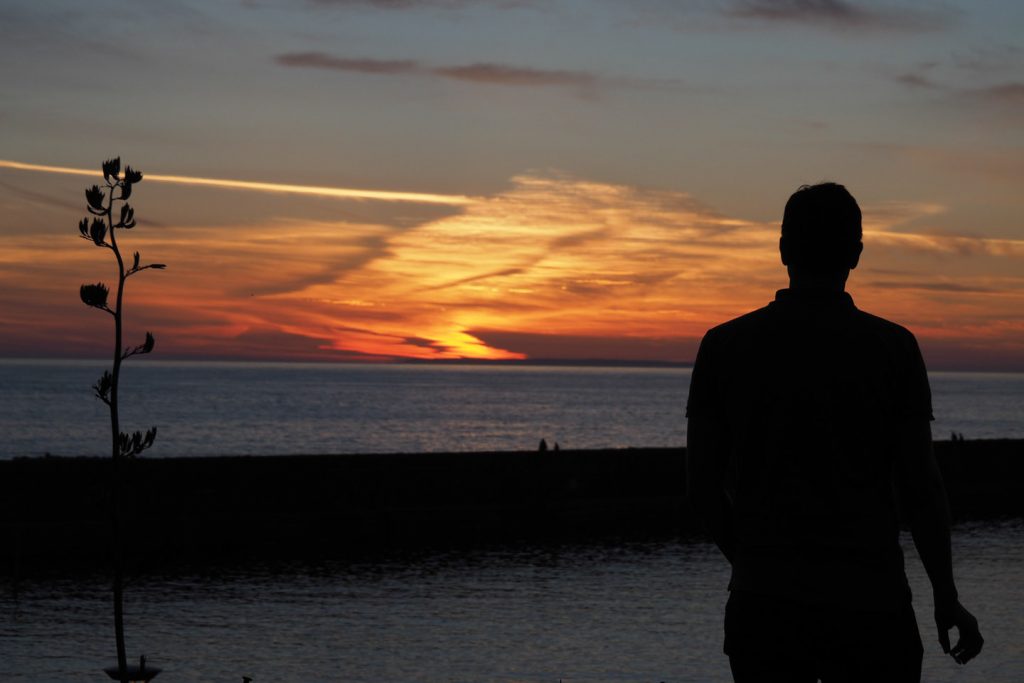 Joško in the sunset of Diélette

The next day our parents joined us on board so the whole family was sailing together. The conditions for this were picture perfect. A sunny day with up to 10kn of perpendicular wind. The leg was also a shorter one so we spent (after dad cought twice two mackerels) a good portion of it anchoring and picnicing off Carteret. 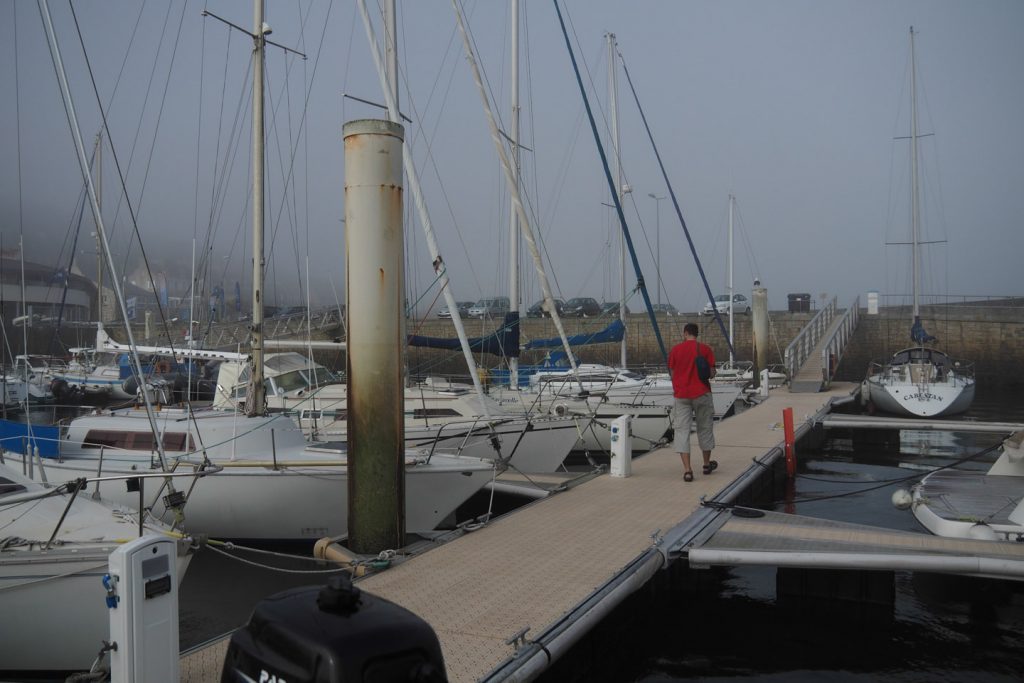 Marko walking into the fog – for breakfast before departure 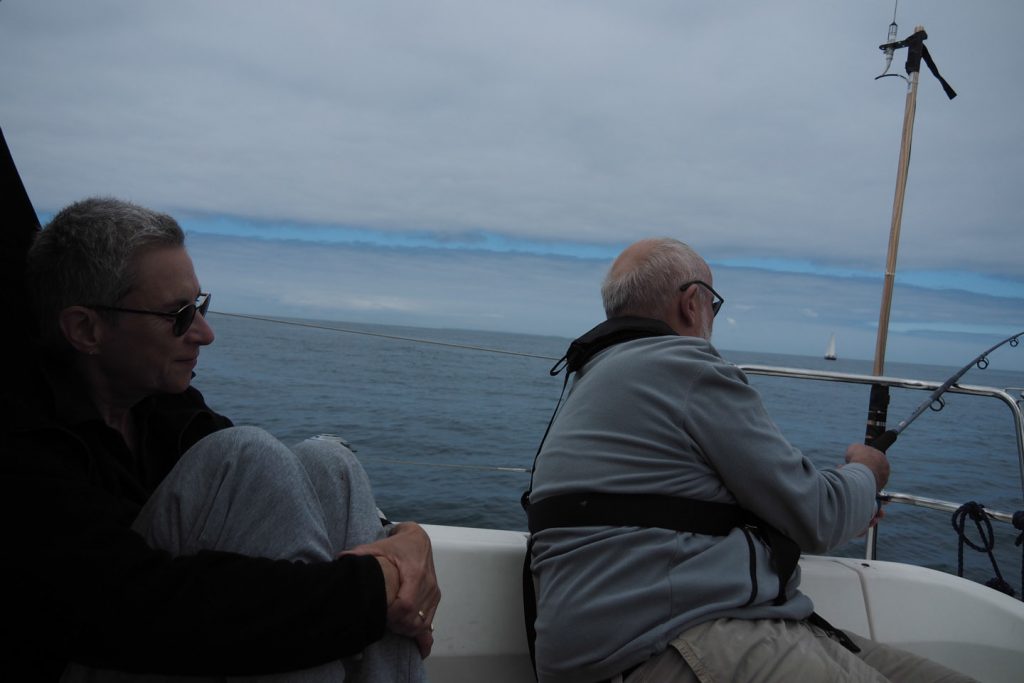 My parents sailing aboard mala moja – an honor 🙂

The last day with the family was again just us brothers on a super-relaxed sail. We played cards, slept, joked, had dolphins escort mala moja (my first dolhin sighting) and a good time on the way. 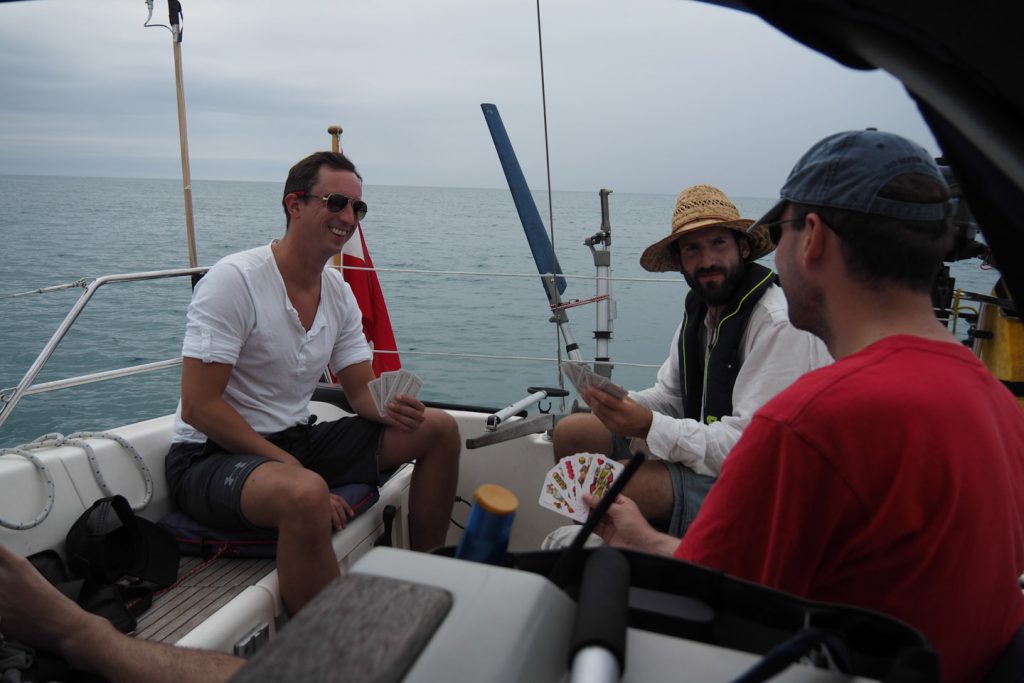 A game of “3er-Schnapsen” along the way. With a very special set of cards. 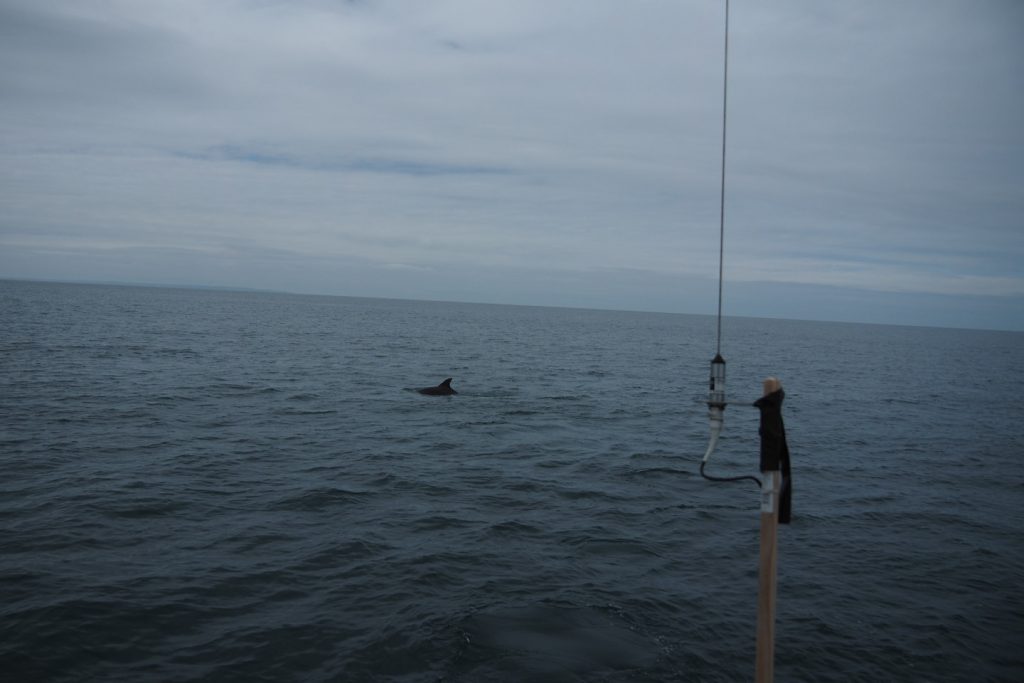 With Walter and Ulli i took it to Jersey, cause i wanted to see at least one of the Channel Islands. We wanted to depart the following day but decided not to, as it would have been a pitty to not have seen anything. So we had a nice day that we spent biking on Jersey. 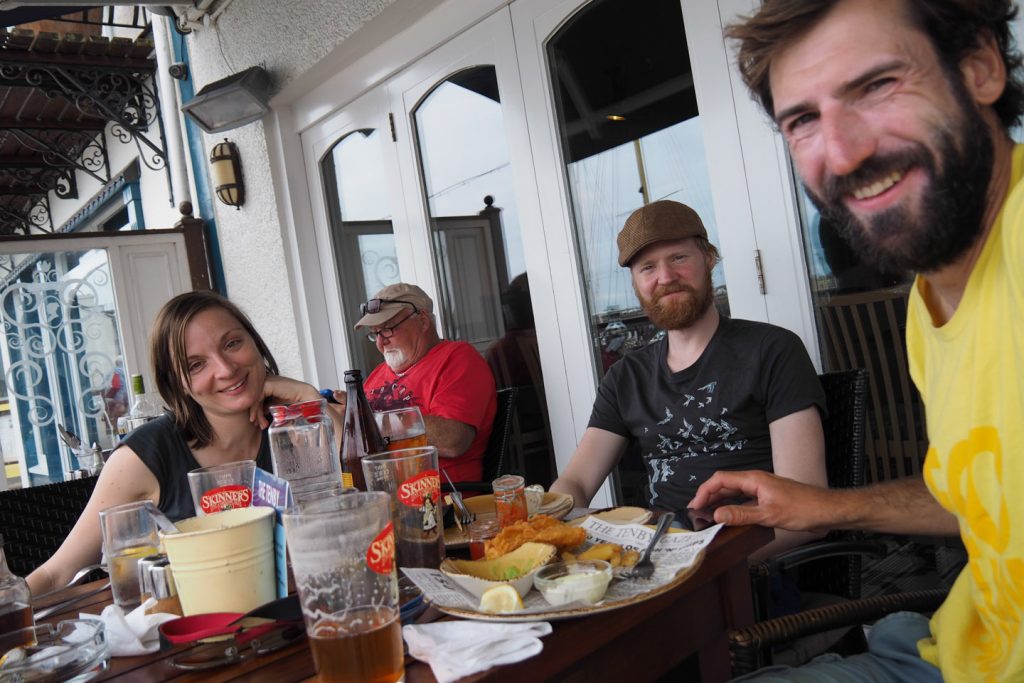 Having lunch in a pub. Yes, fish and chips are greasy. 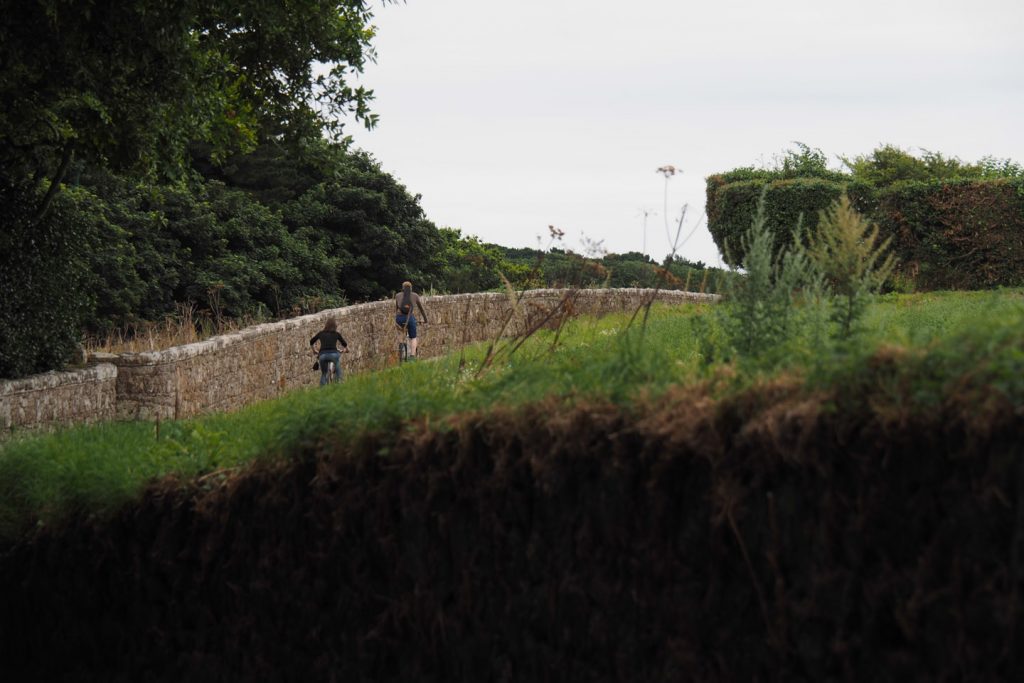 Biking though what could be Schottland too. Just much milder… Jersey is beautiful. 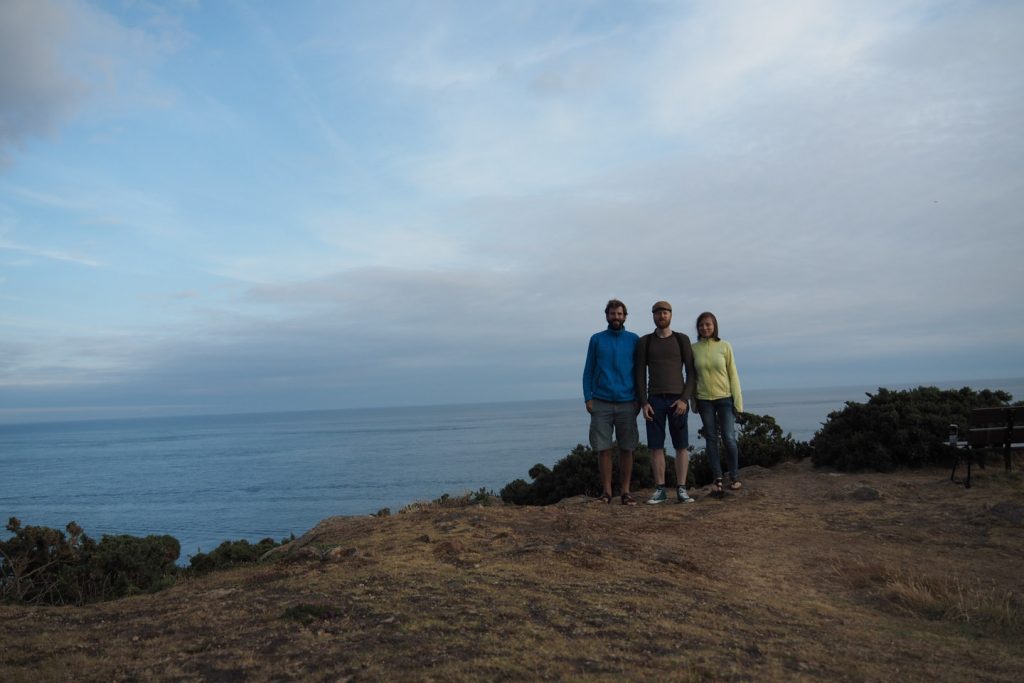 Us and the sea

We departed the day after. But we left a bit late and conditions were less than perfec with wind directly from our destination, a “moderate” sea and dizzle. Fearing we might not make it in daylight – with a rocky coast at our goal – i decided to turn around. This gave us another afternoon and a party evening in Jersey. The two had to take the ferry the day after to get to Paris and their plane in time and i decided to wait another day (after the party ;). 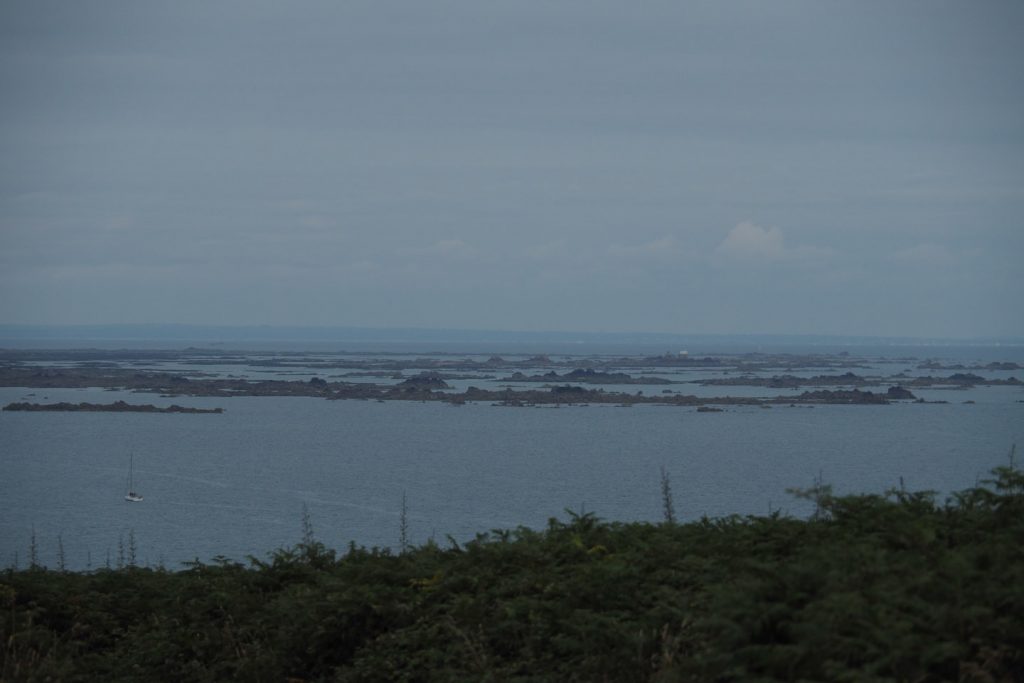 (Cover image: Spider silk on mala moja’s back stay – the wire holding the mast from the back of the boat)