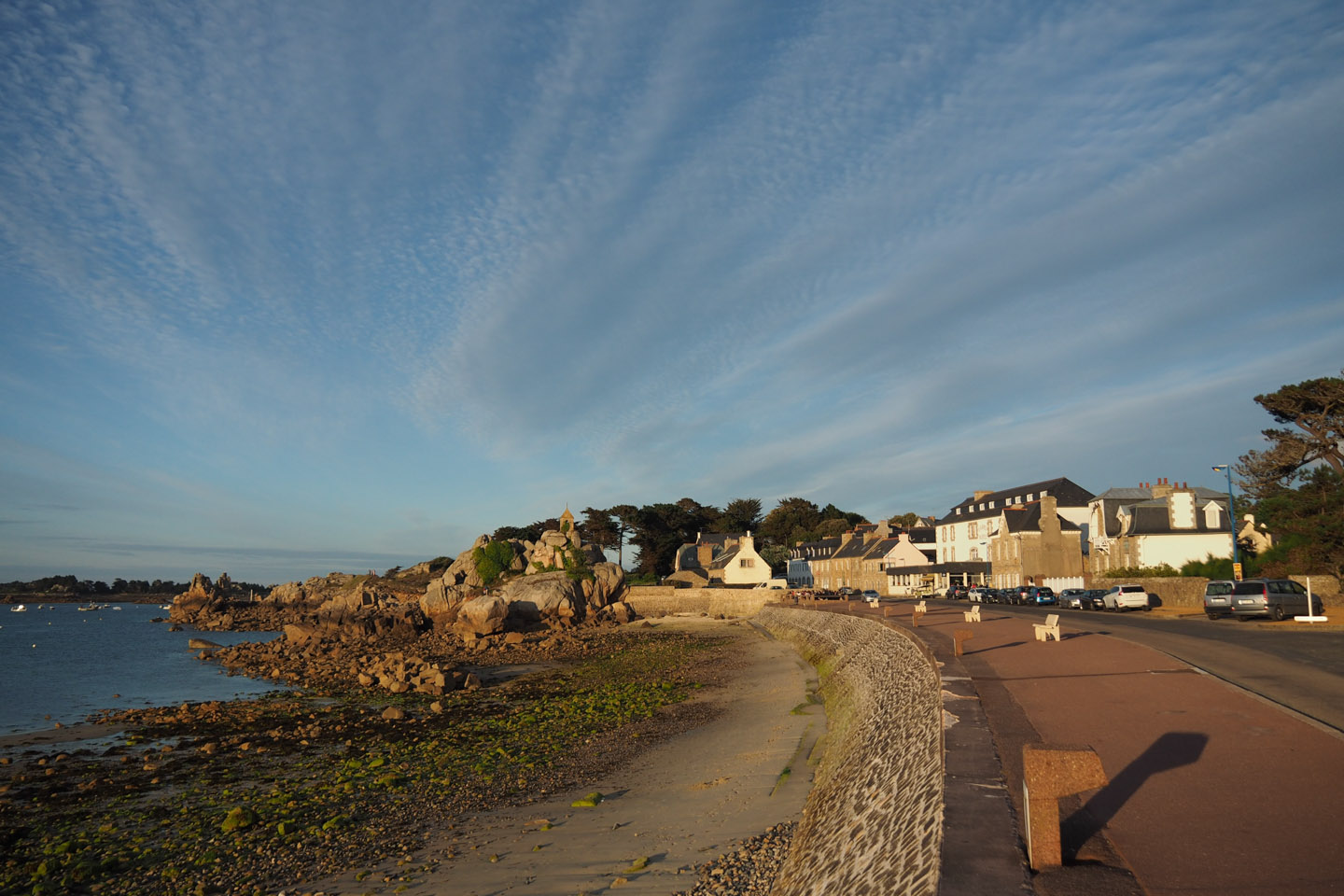 Homecoming. And 1000 miles.
In one post.
… needs at least a separate post from the brief update of the last weeks 😉

Reaching Brittany was always this distant goal. It is the place where i landed with the Tres Hombres a year ago, with the dream of going on a long sail myself. The place and landscape that i fell in love with. And fell in love with againg today.

It is a special feeling for me. That this just coincides with having completed my first 1000 miles on mala moja is all the more pleasant. When i set out to return from Jersey to France with Ulli and Walter we were heading for Brittany. I even had already hoisted the Breton flag in Jersey, as i didn’t feel like doing so in the conditions at sea. But then we returned. 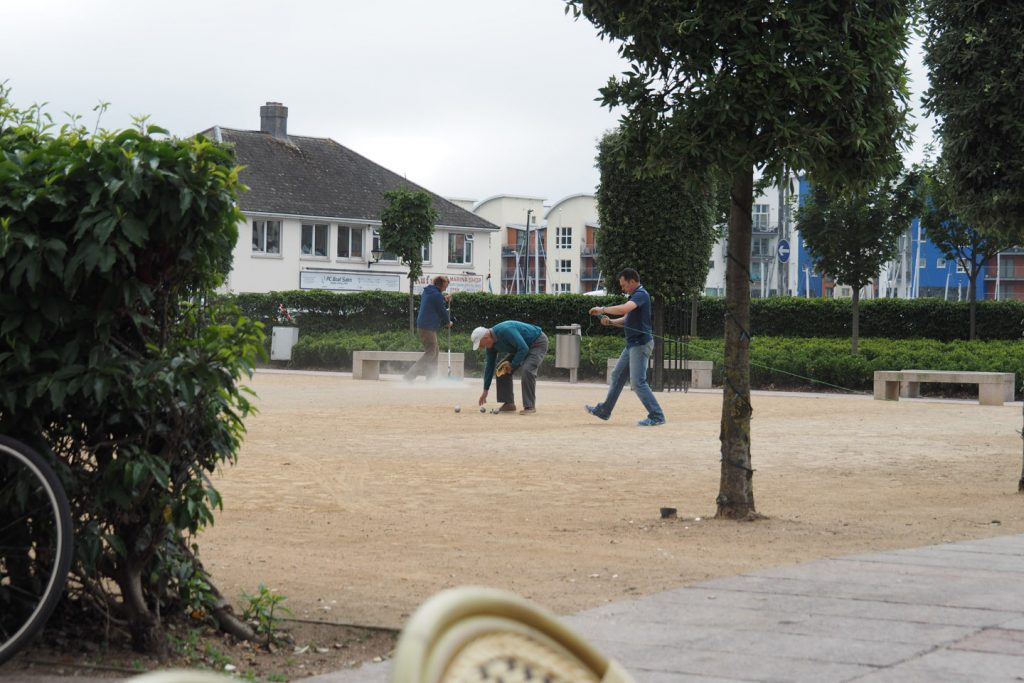 Pétanque players in Jersey; despite being British the island is strongly influenced by french culture 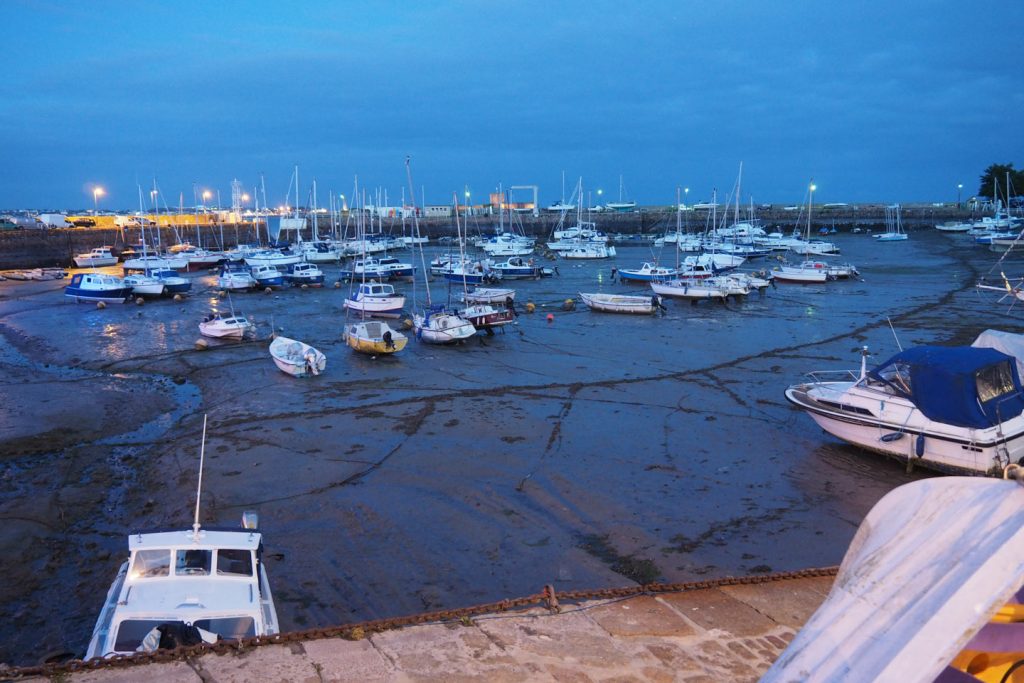 So my homecoming was a solo sail. The first one for which i set out at night, getting up just before 0300 in order to still catch a part of the favourable tide. When i headed out of the harbour the wind was still a high 5. The sea was “moderate” (which sounds more moderate than it is, but of course, compared to the other sea states, it is “moderate”) and it was night with a cloudy sky and dizzle. Taking the West Passage out from St.Helier i first had to fight the overfalls (an effect that creates quite a violent sea) there – not funny. And then i saw a ferry coming my way on the AIS. My heart just dropped into my boots… It’s not funny to be in a narrow channel, knowing rocks left and right of it, violent overfalls breaking over the deck of mala moja and then there is this fucking fast and humongous piece of steel coming at you in the dark of the night. To make it a bit more intimidating they turn on a spot light and scan the area for you. I felt small. And frightened. That i had the wind on my nose and dizzle coming down did not make things feel more pleasant. 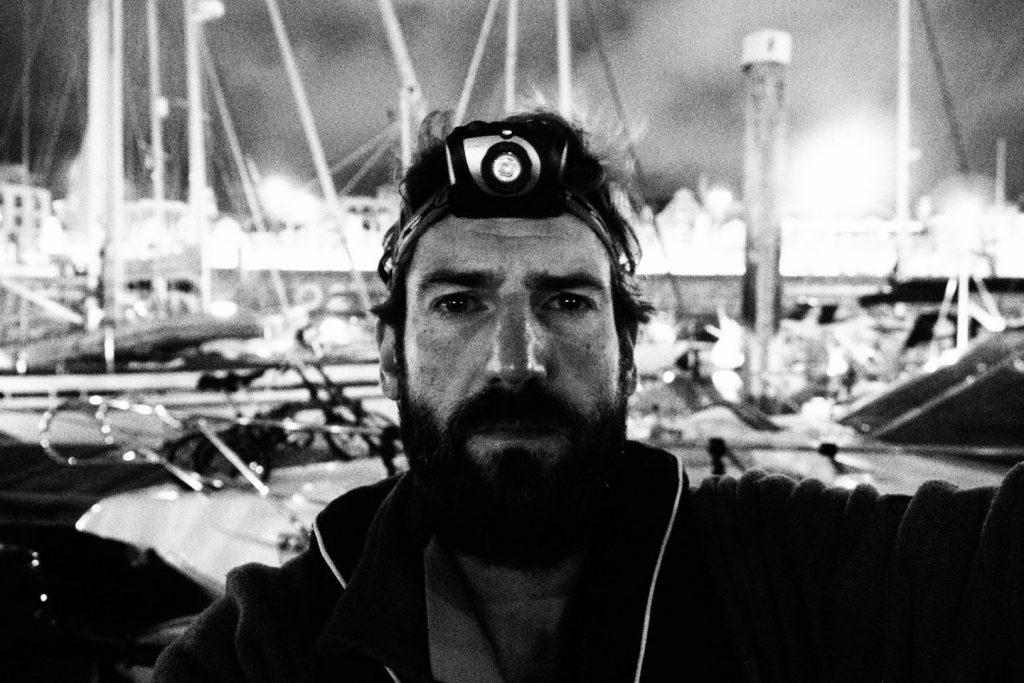 Ready to depart into the night and unpleasant conditions.

The last few days i found myself thinking quite often about sailing as a team sport (or make it “team thing” if you don’t practice it as a sport). And i do believe that sailing is a team sport, where you want to have people around you that you like, respect and can rely upon. And that solo-sailing is less a matter of sport and skill but much more a psychological challenge. Sure, there is solo-sailing as a sport. But especially long solo races are much more of a mental challange than one of skills.

In that sense my decission to leave during the night was a challenge. I felt that i had to challenge myself. Maybe it will help me overcome the constant anxiousness and departure angst. I set Roscoff as my goal. A very ambitious one, unlikely to reach. But i wanted to try. 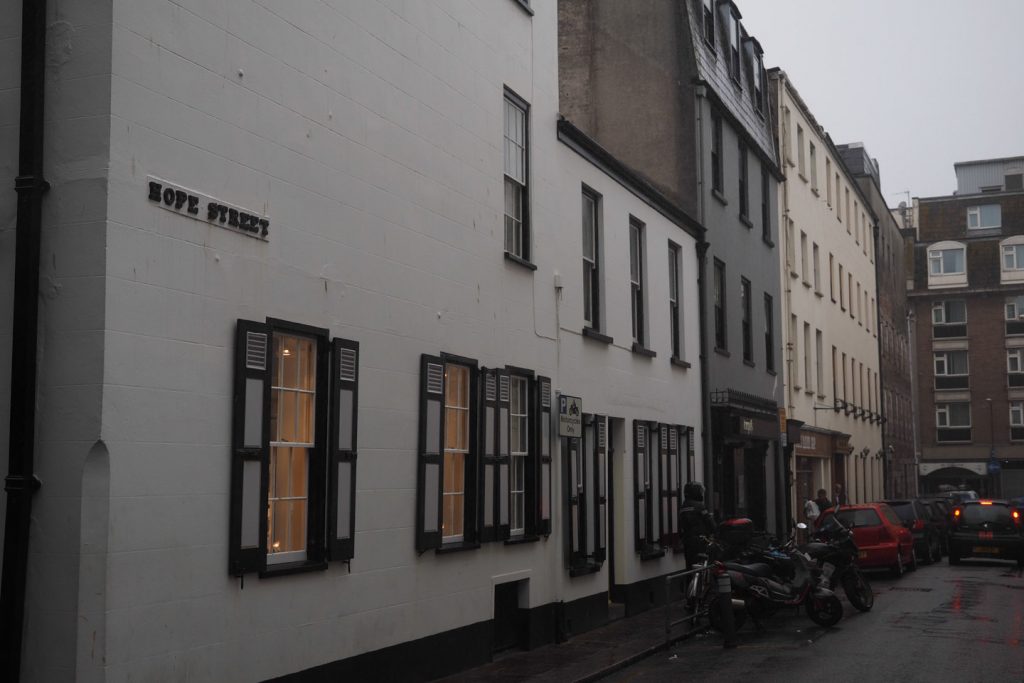 So after i passed the ferry inside the West Passage, without any problem other than a mental challenge, i continued west-southwest. The wind was supposed to let off a bit and did. But the waves kept coming straight at me. Whith theese conditions sailing was not an option to me, as real tacking would have stretched the distance to infinity. Instead i was motor-tacking with the main sail up to add a bit of speed and stabilize the boat in the waves.

I spent several hours trying to get some rest by having a 17-minute timer after which i checked everything and went to snooze again. Reaching the coast of France i was faced with a simple decission: continuing or taking the first port. As the following ports would be unaccessible due to the tide and anchoring did not seem promising with the prevailant conditions, i decided to sail up the Trieux river to Lézardrieux, even though that meant 8miles upstream and subsequently 8 miles back before being able to continue the following day.

But it was worth it. You could immediately notice a difference in the landscape and looks between the Normandy and Brittany. And of course both are again alltogther different than Jersey is. Britanny is much rougher. Its coast is rockier, its settlements rougher. But lovely. And the harbor bar that was there was “the dot upon the i” as a german saying goes. I was happy to raise the Breton flag and have a bowl of Moules Provençal in the bar. 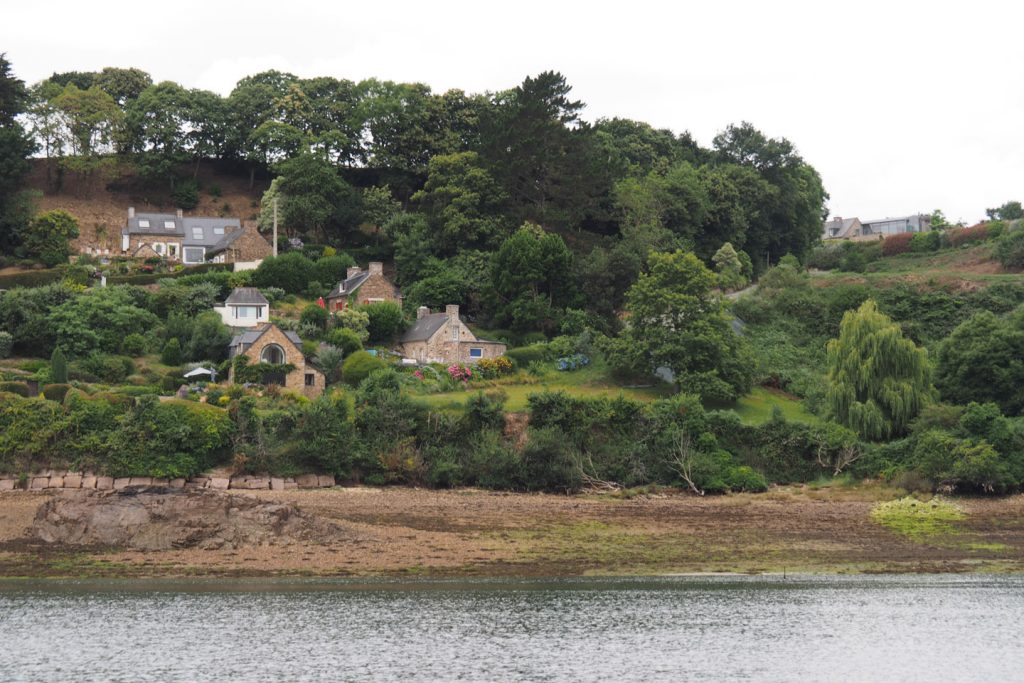 Houses along the estuary of the Trieux river

Still tired from the day before, i did not feel like getting up at all in the morning. But in the channel the tide dictates your rhythm. And it is a mercyless 12-hours-and-a-bit rhythm. If i did not want to have up to 3.5 knots of current coming up the river, i had to leave the river before low tide. Low tide was at 1030, the river ride 8 miles thus i needed about 1.5 hours to get out of it. So i got up swearingly at seven-something (getting yourself and the boat ready takes another 30-60 minutes if your not super-rushing).

But low tide also meant that the whole channel was running eastwards now. My plan to sail north with the westerly wind and then tack down west-southwest with the slightly north-veering wind turned out to be flawed. I underestimated the power of the tidal stream. Instead south-west i was going south with almost no westerly progress.

Hence i turned on the engine to support my fully set sails. This helped and later on i could even turn off the engine for a stretch as the wind indeed veered to WNW. But the (strong) tide would stay against me for 6 hours. So again decision time. This time with three options.

1) Take the first shelter that comes up (Port Blanc with mooring bouy or anchorage) or
2) continue to the “beautiful landscape” of Ploumanac’h (basin only accessible at high tide) which was the second shelter or
3) keep on track for Roscoff.

No.2 was possibly not accessible any more (my almanach has no precise times for this little “port”). Hence i might have been forced to go back to 1) with the risk that all bouys are taken and i would have to anchor in a rocky tide area (no fun). No.3 would mean to sail against the tide until it turns and then arrive at night in Roscoff. With a coastline rich with rocks and shallows that did not sound like too much fun. So i turned off the engine and sailed the remaining stretch to Port Blanc.

On the way i witnessed an extremely elegant massacre. First i noticed a flock of birds circling an area and starting to dive into the sea for fish. Just a bit later a school of dolphins joined them, plowing the area for fish. I assume that a bunch of mackerels died there. But it just looked spectacular. 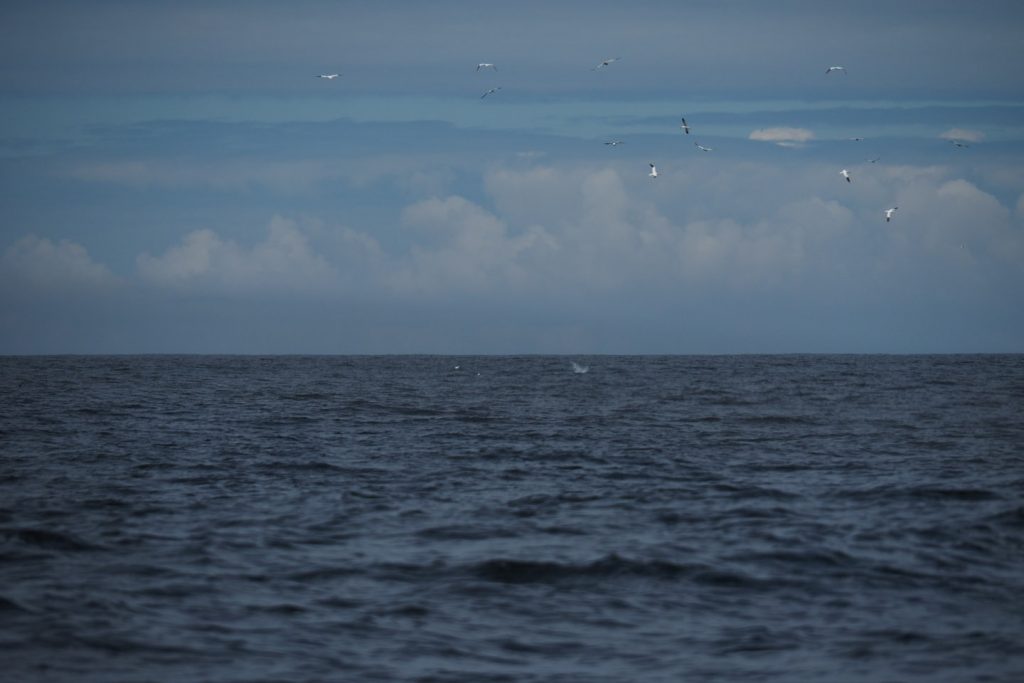 Port Blanc was, as described, an “unspoilt village”. Sooo beautiful. I enjoyed the sunset on the terrace of the “Grand Hotel” – the only bar/restaurant around, and not posh at all – after getting to shore with my dinghy. 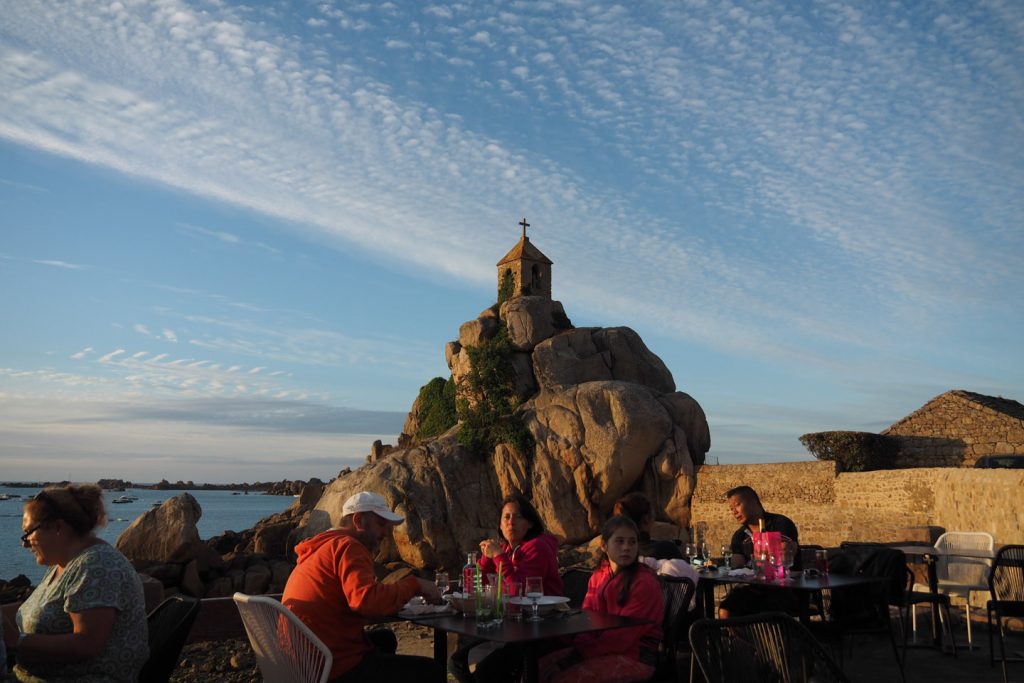 Today in the morning i was woken by the mooring-bouy hammering on mala moja. I don’t understand why the boats here are not alining with the wind. The current would be one explanation, but there was none that i could notice. Anyhow, the boat was rocking really uncomfortably and the banging was nerve-wracking. To add to it i noticed that because of the strange drift the ropes scraped off some of my anti-fouling 🙁
As to add to my unhappy-angry feeling the water pump suddenly turned itself on without reason – and i found water and a piece of water pipe in the bilge. I turned it off, got the boat “ready” within 10 minutes and left the bay. Brushing teeth, breakfast and everything else happened along the way.

The good thing: this way i cought the full stretch of the tidal stream which carried me swiftly to Roscoff. And biking the city i fell in love with Brittany, again. 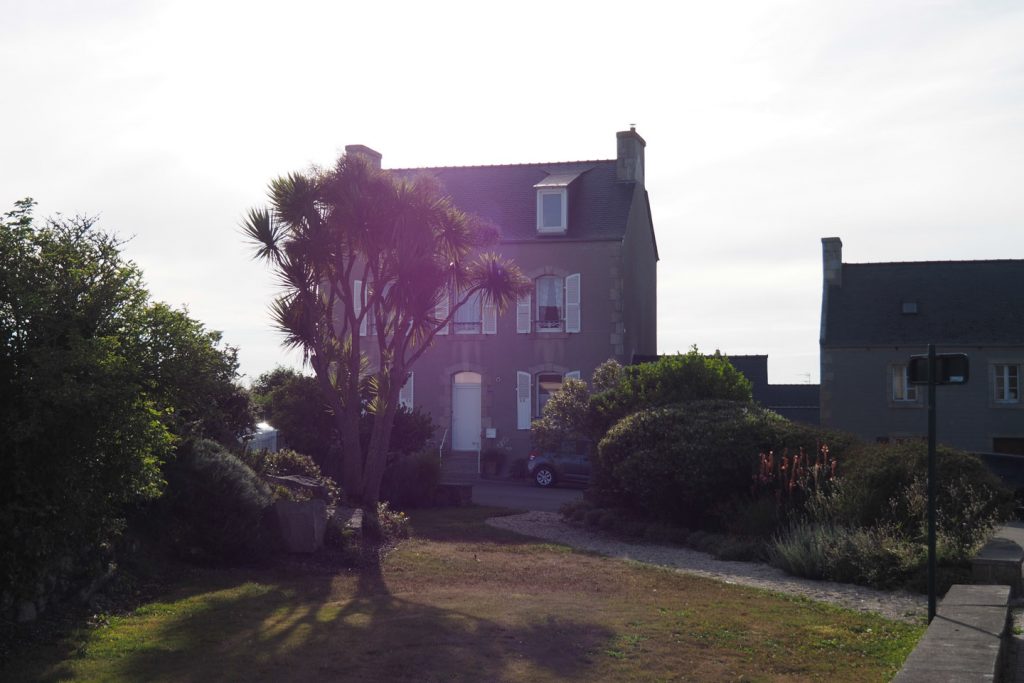 Just one of the countless unspectacular houses in Roscoff

The pipe piece in the bilge was apparently lost already a long time ago and just resurfaced, the water seems to be nothing than the usual accumulation and the anti-fouling i will check when i go diving the next time.

But now i’m here. Roscoff. Brittany. Not far from Brest and Dournanez. And 1000 miles older than i was when i went aboard mala moja.