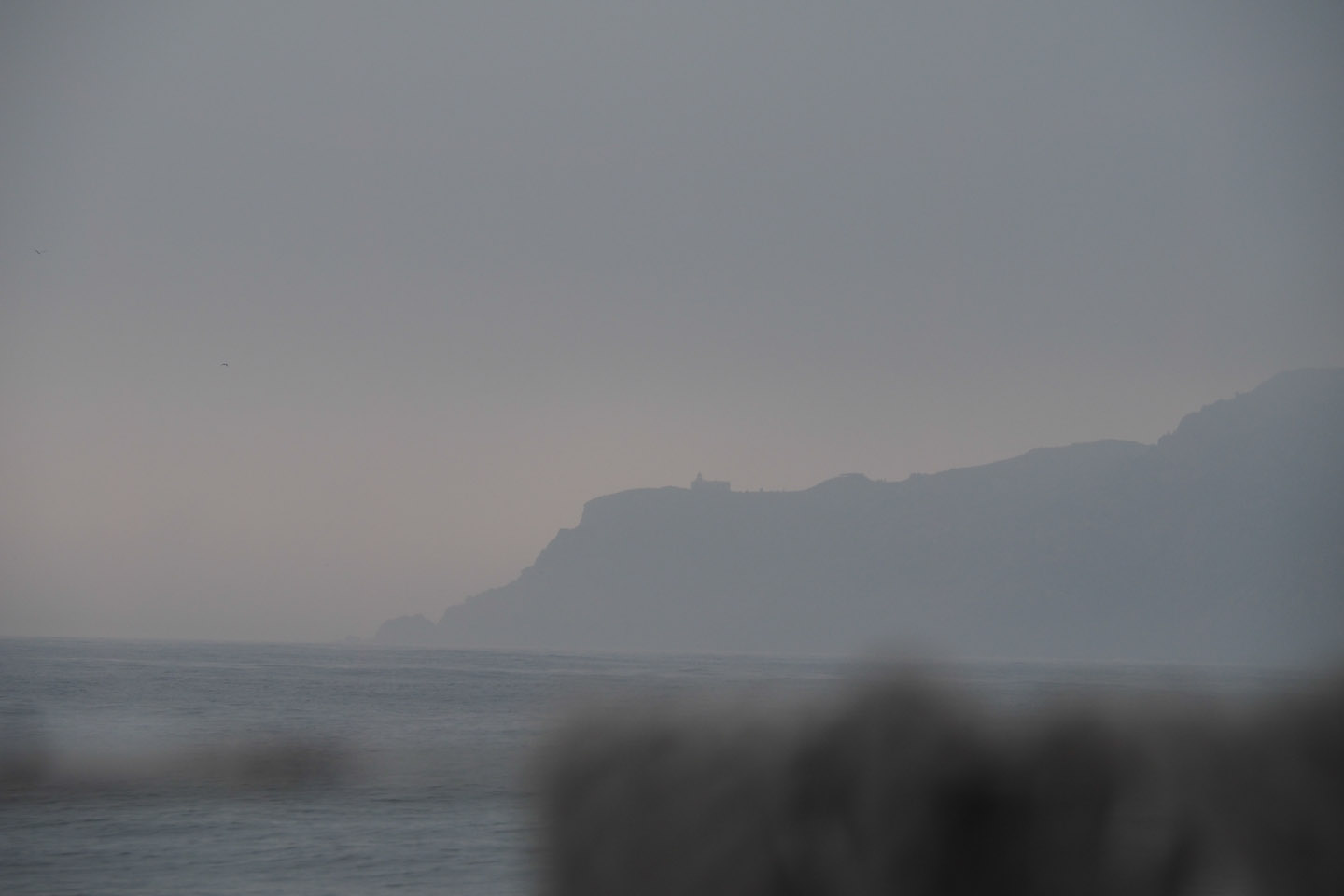 Damn. Time really flew by.
Over a month since my last post and sooo much has happened. To pack all this in one single post is (more than) challenging.

It’s a Saturday and i am in the middle of Portugal, as the beginning already gives away. As my last post came from Roscoff, which still lies inside -albeit at the edge of- of the English Channel, i apparently did make a bit of a geaographic progress.

Currently i am “struggling” with engine problems. The motor battery’s juice is being drained when the engine is running. This…
a) should not be the case, as the alternator should be charging,
b) means that after i let the engine run for several hours i cannot turn it off and on again (whithout charging it in between), which,
c) in theory, is not soo bad as I) the boat is a sailing boat and II) there are work-arounds to it, but
d) sucks. 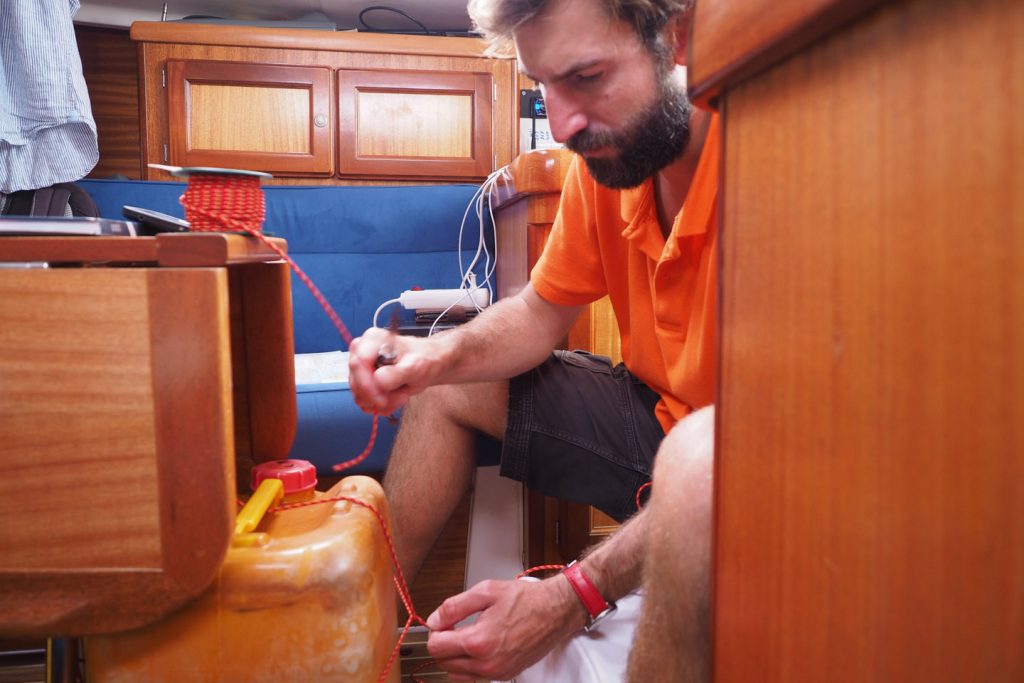 Getting ready for Biscay – securing the spare diesel canisters. Enough diesel to cross it all by engine – if really necessary (i mean: it’s a SAILING boat) and the engine works.

This problem first occcured in the middle of Biscay. After the first day the wind died down and so we – next story – had to switch on the engine and motored through the first night. In the morning of the second day the wind picked up and we turned the engine off again. Until in the second night the wind grew strong enough to shorten sails. I decided it be easier to do with engine support and wanted to turn it on. But instead of a sound there was nothing. Silence. Well, it’s a sailing boat and wind there was plenty. So we reefed without the engine. The next day i checked on the problem and found the battery completely empty. The volt-meter read 12.1V and with less wind i could hear the engine fan turn on and the starter making a few revolutions. But it was far from starting. So the question was: take care of it now or tomorrow before we reach the spanish coast? 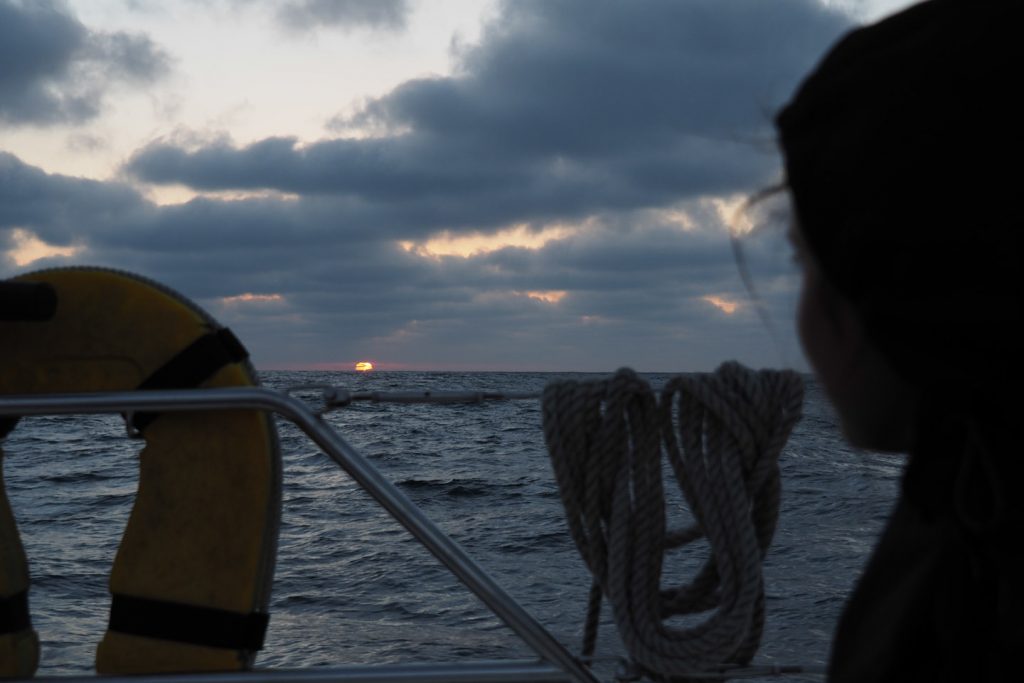 Fortunately enough we decided take care of it now. So i got the engine-battery out of the compartment, fixed some spare wires, rewired the solar-charger and gave the engine-battery 2 hours worth of (almost) southerly sun. Battery in place i skipped pre-heating of the engine and there it was, the ship’s diesel running like a charm again. A bit later the wind died off (completely) and we were happy to have the engine running – even though it meant that it will run through the night -no matter what- to reach Spain with a working engine.
The alternative (turning it off and eventually having to be towed into harbour) was not even close as the wind just kept too low for sailing all through the third night and beginning of the fourth day. In addition a thick fog settled in. With a flat sea and drastically impaired visibility we approached A Coruña.

As i did not want to make the trip accross Biscay myself (primarily due to sleeping breaks, but also for moral backup and a better time) i did try to find somebody spontaneous enough to do it with me. I was already preparing to do it on my own when Kathi, who i had gotten to know a while ago in Vienna, spontaneously decided to come along. 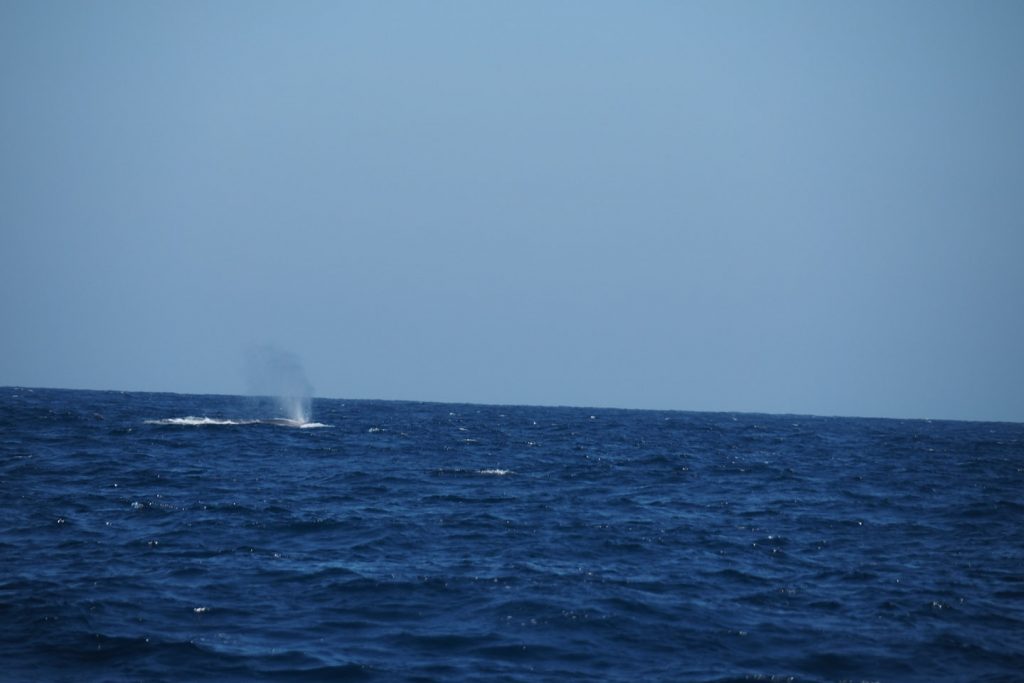 A whale blowing in the Bay of Biscay…

For her it was the first time sailing (total respect for that!), so everyhting was new to her. But for me quite a bit along the trip was new as well… Dolphins swimming along with mala moja not (for me). But being there, several hundred of kilometers away from any artifical light (spare the boat’s position light), made the Perseids meteor shower even more intense. Just after we sailed over the continental reef we had whales blowing some 200 or 300 meters away. Then the fog-approach of A Coruña. Somehow a pitty not have a “landfall” in Spain. But we lucked out: as we approached the harbour the “Tall Ship Race 2016” just left it… and we found ourselves swimming against hundreds of ships. The dozens of “Tall Ships” from the race were accompanied by hundreds of little boats who accompanied their running out. And all in this fog setting… awesome!

The first of the “Tall Ship Race” flotilla exiting A Coruña on our way in.

And hence, there we were: Spain! The south! Biscay left behind. In reach of Porto – which i had envisioned as my first “goal” of the trip. How things changed. 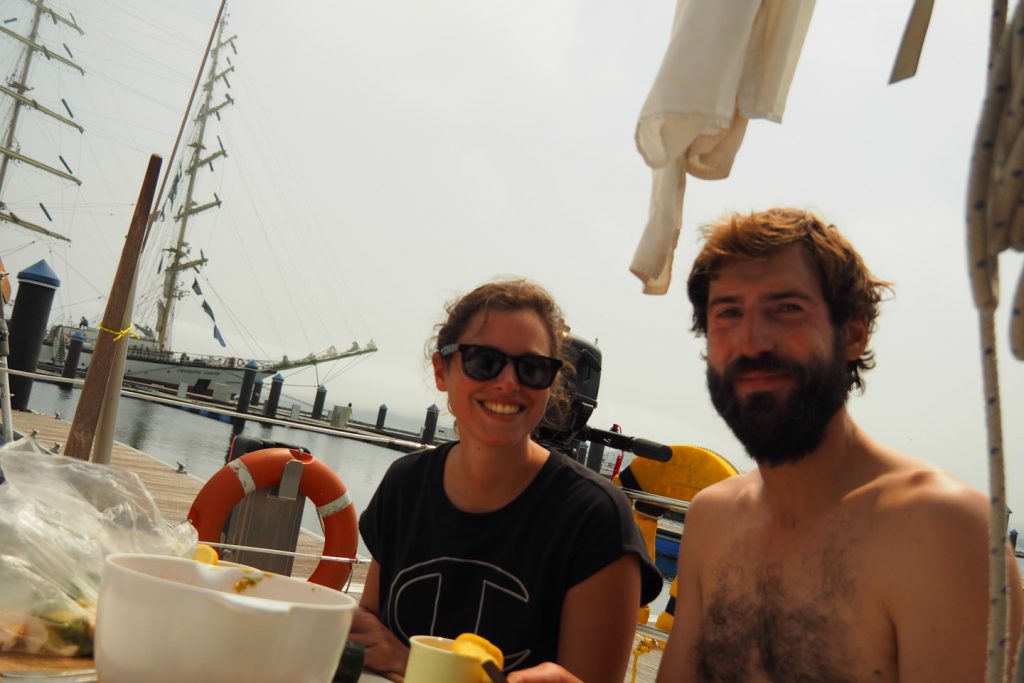 Celebrating landfall after 3 days at sea. In the sun of the south 🙂 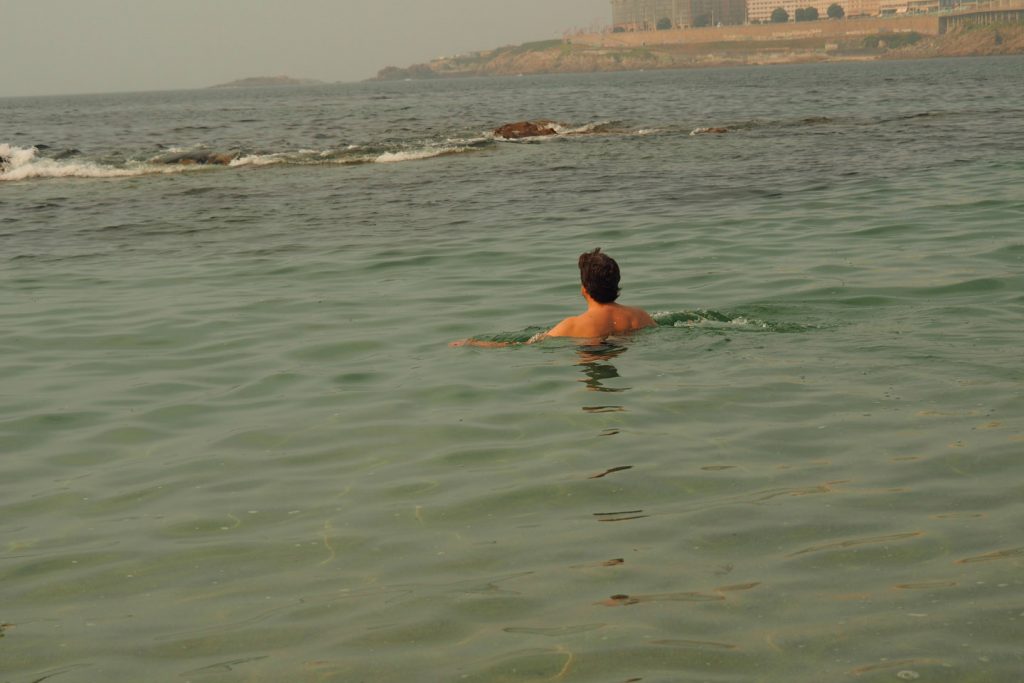 The south. Finally. After months i’m there… (unknown guy in the sea)

(Cover photo: Spain’s coast before A Coruña covered in fog… a “silent” landfall)